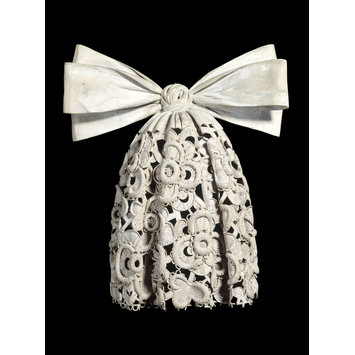 Object Type
This wooden cravat is carved in imitation of Venetian needlepoint lace and is life size. It was made to demonstrate the carver's skill. Similar cravats appear in architectural decorative schemes associated with Gibbons. This piece was probably made to show and impress potential patrons.

People
The cravat belonged to Horace Walpole (1717-1797) who thought highly of Gibbons' work as a woodcarver. His family home, Houghton, Norfolk, included a room decorated with Gibbons' carving. Walpole thought that one of the ivory reliefs on his cabinet (W.52:1-1925) - that representing Judith with the head of Holofernes - was also carved by Gibbons although this attribution is not accepted today.

Place
Gibbons' cravat was displayed in the Tribune Room at Strawberry Hill with the Walpole Cabinet. It formed part of Horace Walpole's collection of special small objects. In 1769 Walpole wore the cravat to receive some distinguished French, Spanish and Portuguese visitors at his Twickenham home, Strawberry Hill.

Carving with raised and openwork in the form of a tied lace cravat tied using contemporary Venetian needle lace with a bow of plain linen. The reverse is unfinished.

Supplied with the carving is an early 20th century wooden box (HWD: 9.3 x 27.4 x 24.2cm) with hinged and locking glazed lid (without the key), lined with red velvet which has faded to the outline of the carving, contains a paper with handwriting, probably 19th century (black ink): 'From Horace Walpole, Lord Orford's/ collection, sold at Strawberry Hill / 1842 / Carved Bow in Oak / by the famous Gibbon

Limewood, with raised and openwork carving

In the Description of Strawberry Hill, 1774, the cravat was in the Tribune and was identified as by Gibbons. It was in one of two glazed cabinets containing Walpole's 'principal curiosities' which flanked the altar. In the 1784 edition the cravat is described as 'a present from Mr. Grosvenor Bedford' (Walpole's deputy at the Exchequer), who had given the cravat to Walpole by 1769.

Featured in the BBC TV series Handmade in Britain (2013), 'CARVED WITH LOVE: The glorious Grinling Gibbons'

Lent to the exhibition 'The Genius of Grinling Gibbons - From Journeyman to King's Carver' at Fairfax House, York, April 14th - 14th September 2018.

Shown at Strawberry Hill for the exhibition 'Lost Treasures of Strawberry Hill: Masterpieces from Horace Walpole's Collection', 20 October 2018 - 24 February 2019. See below for reference to catalogue.

The cravat is similar to those represented in other schemes of carved decoration by or associated with Gibbons such as the Cosimo Panel, 1682 given by Charles II to the Grand Duke of Tuscany, Cosimo III de' Medici 1642-1723), for which Gibbons was paid £150, his highest payment for a woodcarvng (Esterly, p.131-3)
Chatsworth House, Derbyshire, Panel of small carvings with a point lace cravat, songbird, a medallion and foliage (possibly by Gibbons (See Esterly, p.104)

Cravat, made of limewood with raised and openwork carving, by Grinling Gibbons, ca. 1690

Chapter 5 discusses the cravat and considers Walpole's interest in Gibbons as carver and collector
This object features in 'Out on Display: A selection of LGBTQ-related objects on display in the V&A', a booklet created by the V&A's LGBTQ Working Group. First developed and distributed to coincide with the 2014 Pride in London Parade, the guide was then expanded for the Queer and Now Friday Late that took place in February 2015.
Victoria & Albert Museum: Fifty Masterpieces of Woodwork (London, 1955), no. 30.

Davoli, Sylvia, Lost Treasures of Strawberry Hill. Masterpieces from Horace Walpole's Collection. London: Scala Arts & Heritage Publishers Ltd., 2018. ISBN: 978-1-785541-180-6, p.85 [The Tribune]
David Esterly, Grinling Gibbons and the Art of Carving. (London, V & A Publications, 1998), pl.113, p.136
'Finely-detailed cravats and collars were a well-established arena for technical competition among marble carvers in the 17th century. [n.6] Gibbons was the first and remained virtually the only carver to extend the virtuoso treatment of this subject to wood, most famously in the full cravat later owned by Horace Walpole.' 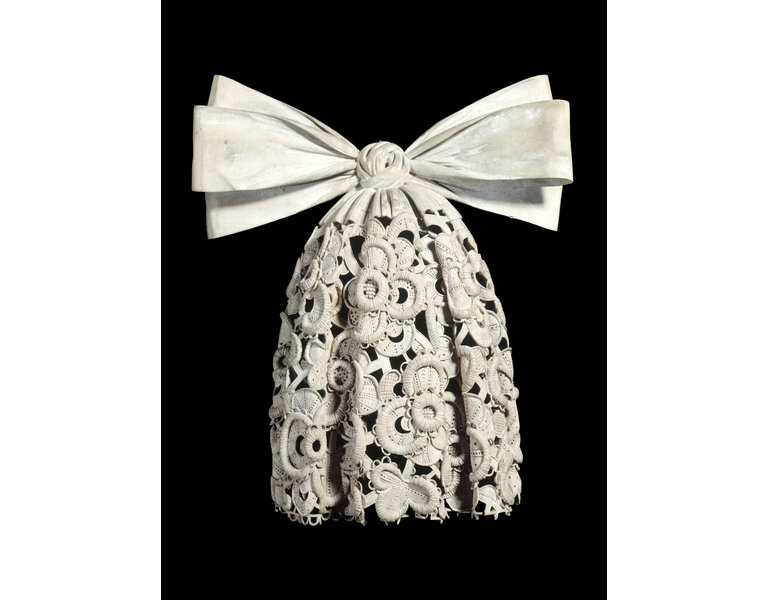