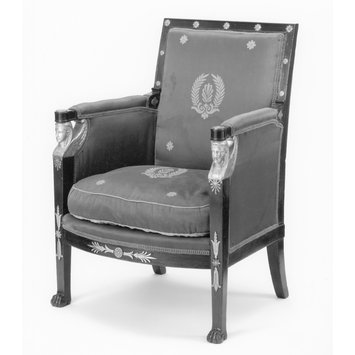 This armchair was part of a set of seat furniture made for the French hero, Maréchal Ney (1769-1815). Ney was one of the Emperor Napoleon’s military leaders, and he came to be known in France as ‘the bravest of the brave’. In 1805, after his marriage, Napoleon helped him to buy a house in Paris, the Hôtel de Saisseval. Ney furnished it lavishly in the fashionable Empire style. He used many of the firms who worked in the imperial palaces. The firm of Jacob-Desmalter, which made these chairs, was the best-known supplier of luxury furniture. They made the chairs for the Petit Salon and upholstered them in brocaded blue silk. In 1815 Ney was executed by the allies who had defeated Napoleon at the Battle of Waterloo.

A bergere or armchair of mahogany, upholstered in brown rayon damask, with a loose cushion. The rails and uprights are mostly of rectangular section, the back legs slightly raked, the front legs carved at the base with lions' paws. The front legs rise to form the arms supports and are carved at the top with winged sphinx heads which are gessoed and gilded. The arms are of rectangular section, the sides panelled, the joint with the back of the chair carved as a lotus head in elevation, the front of the arms enlarging as a circular drum that sits above the sphinx's head. The frame of the back is rectangular, the rectangular-sectioned frame elements panelled in the manner of the arms, the middle (lower) section set with 9 equally set gilt-bronze paterae. The outer sides of the back of the arms are set with lotus head mounts in gilt-bronze and the top surface of the front of the arms with a moulded gilt-bronze paterae. The front of the legs and the bowed seat rail are set with gilt-bronze mounts of paterae and flower heads. The back and sides are upholstered, with long arm pads on the top of the arms. The seat is upholstered and set with a separate cushion. The damask of the back and the top of the cushion is woven with a wreath, with four paterae in the spandrels.

Mahogany, carved, with gilt-bronze mounts, with modern upholstery of silk

One of a large number of pieces of French furniture, ceramics, metalwork, books and other decorative arts, from the Empire period and earlier, acquired in Paris by Sir Charles Stuart (from 1828 1st Lord Stuart de Rothesay) (1779-1845).
This armchair and two others matching (W.2A,B&C-1987) form part of a smaller group of chairs and stools that were made for the Petit Salon of Maréchal Ney at the Hôtel de Saisseval, Paris. In the inventory of his goods taken after the execution of Maréchal Ney, started on 27 December 1815, the contents of 'Une pièce servante [de] Petit Salon' at the Hôtel de Saisseval included a suite of seat furniture 'acajou, satin, bleu brochée, figures égyptienne en bois et cuivre d'oré ['in mahogany, blue brocaded satin, egyptian figures in wood and gilt bronze'].[Paris, Archives Nationales, Min, CXVII 1082]. The whole suite was valued at 900 fr. It comprised 2 large bergères, 2 smaller bergères , 2 other bergères, 2 fauteuils, 4 chaises, 2 tabourets en X and 1 tabouret de pied. In the bail or rental agreement drawn up between Madame la Princesse de Moskowa, Ney's widow, and the Comte de Peralada, the Spanish Ambassador who rented the house from February 1816 to April 1817, the contents of the Salon Bleu are listed as 4 fauteuils, 4 bergères, 4 chaises, 1 canapé, 2 tabourets de pieds and 1 screen, all in mahogany with gilt-bronze mounts, upholstered in 'etoffe de soie fond bleu et chamois' ['silk fabric with a blue ground and buff colour'], with case covers in silk lined with toile royale. [Paris, Archives Nationales, AN.VIC.ET-CXVII-1083]. Though the number of pieces differs it is probable that the same set is being described.

The furniture must have been sold from the Hôtel after the lease of the Spanish Ambassador had expired, in 1817. Lord Stuart de Rothesay probably purchased these peices, together with his other Empire furnishings, during his first period as ambassador in Paris (1815-1824) (whereas the earlier furnishings were probably acquired during his second embassy (1828-1830)). Since there is no traceable public sale of the furniture of Maréchal Ney, it is possible that Stuart bought these chairs from his widow as a private transaction.

Stuart's Empire furnishings may have been intended for a London house. He acquired 4 Carlton House Terrace, where improvements were carried out from 1827 to 1831, and he moved in in 1834. Older furnishings were more probably purchased for his country house, Highcliffe Castle, Hampshire (now Dorset), which was remodelled and enlarged in the most ambitious Gothic style from 1830 to 1834, with some work continuing throughout the 1830s. In 1841 the house in Carlton House Terrace was let, and the family moved their London residence to Whitehall Yard. It was possibly at that time -- or in 1845, the date of Lord Stuart de Rothesay's death -- that the Empire furnishings were moved to Highcliffe.
Lord Stuart de Rothesay's collections were inherited in 1867 by his younger daughter Louisa, Lady Waterford (1818--1891), who maintained Highcliffe Castle. She left the house and its collections to her distant cousin Major-General Edward Stuart Wortley (1857--1934). When his younger daughter Elizabeth ('Bettine') married Montagu Bertie, 8th Earl of Abingdon, in 1928, he bought the castle and its contents from his father-in-law. The Abingdons sold Highcliffe and most of its contents in 1949, but retained the present group of furniture and some other pieces. After her husband's death in 1963, Lady Abingdon lived for much of the time with her close friends Mr and Mrs Tahu Hole, to whom she bequeathed all her personal possessions on her death in 1978. Tahu Hole died in 1985, and a year later his widow Joyce approached the Museum and offered the collection as a bequest. She died in December 1986, and in accordance with her will the Museum chose those items that it wished to add to its collections. Other items from the collection were sold to benefit the Museum, and the proceeds added to the funds bequeathed.

Historical significance: In acquiring this furniture, Lord Stuart de Rothesay showed his admiration -- shared by many of his contemporaries -- for Maréchael Ney; he was distressed that he had to stand aside in the matter of Ney's execution.

Another bergère from this set is in a private collection, on loan to the Bowes Museum at Barnard Castle. The early history of that chair is not known, but it is thought to have been in the collection of Maréchal Canrobert, a hero of the Second Empire, and may have been acquired by him also in memory of Ney, 'the bravest of the brave'. That bergère is slightly smaller than the present group of three, reflecting the listing of two sizes in the inventory. It too has lost its original upholstery.

The firm of Jacob-Desmalter was the largest supplier of fine quality furniture in the period of the Empire. Its founder, Georges Jacob (1731--1814), may have learnt his trade of menuisier from Louis Delanois (1731--1792). He established his workshop in 1765, the year he was granted his maîtrise. Before the Revolution he was much occupied with work for Queen Marie-Antoinette, but his friendship with the painter David ensured the successful continuation and development of the firm during two further generations, when carcase furniture was made as well as carved furniture. The firm became in turn official suppliers to the Directorate and to the Empire, and its clients included most of the imperial marshals. In 1803, on the death of his eldest son, Georges Jacob (who had turned over the running of the firm to his sons in 1796) re-entered a partnership with his second son, François-Honoré-Georges (1770--1841), as Jacob-Desmalter et Cie., which lasted until the end of 1828. The form of stamp marked on chairs W.2B&C-1987 was used by this partnership from 1803 to 1813.

This arm chair bears a fragmentary label '(Marsh) al Ney/ (pet)/ it Salon , indicating that it belonged to Marshal Ney (1769-1815). It later belonged to Lord Stuart de Rothesay (1799-1845). The association of the two Jacob brothers was dissolved on the death of the elder, Georges, in 1803. It seems likely that this chair, and the other Ney pieces shown nearby, were executed around this date. 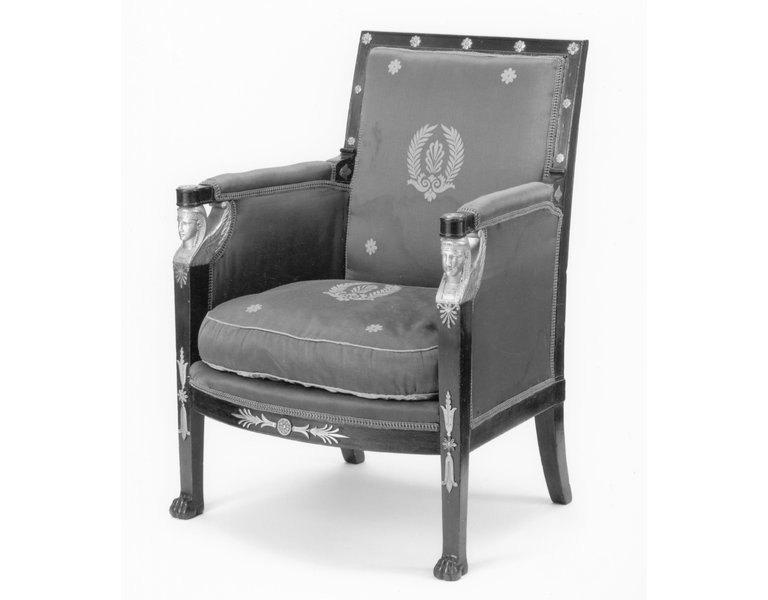