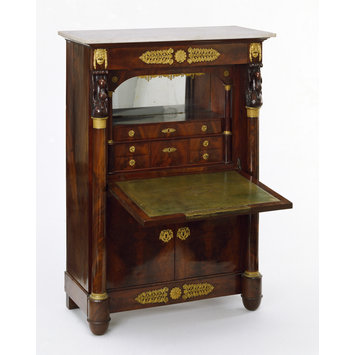 This fall-front secrétaire, or writing desk, in the French Empire style, forms part of a group of furniture purchased in Paris by Lord Stuart de Rothesay, who served twice as British ambassador there (1815-1824 and 1828-1830). Stuart de Rothesay acquired a large quantity of French Empire furniture, which he later brought back to Britain to use both in his London home and Highcliffe Castle, the house in Dorset that he built in 1830-1834.

Mahogany veneered on oak, carved ornament, with chased and gilt mounts and a white marble top

DC, within a circle, extended at the top by a shape reminiscent of an onion dome
Inventory mark, unidentified

One of a large number of pieces of French furniture, ceramics, metalwork, books and other decorative arts, from the Empire period and earlier, acquired in Paris by Charles Stuart (from 1828 1st Lord Stuart de Rothesay) (1779--1845). The Empire furnishings were probably purchased during his first period as ambassador to Paris (1815--1824), the earlier furnishings during his second embassy (1828--30). The Empire furnishings may have been intended for a London house. He acquired 4 Carlton House Terrace, where improvements were carried out from 1827 to 1831, and he moved in in 1834. Older furnishings were more probably purchased for his country house, Highcliffe Castle, Hampshire (now Dorset), which was remodelled and enlarged in the most ambitious Gothic style from 1830 to 1834, with some work continuing throughout the 1830s. In 1841 the house in Carlton House Terrace was let, and the family moved their London residence to Whitehall Yard. It was possibly at that time -- or in 1845, the date of Lord Stuart de Rothesay's death -- that the Empire furnishings were moved to Highcliffe.
Lord Stuart de Rothesay's collections were inherited in 1867 by his younger daughter Louisa, Lady Waterford (1818--1891), who maintained Highcliffe Castle. She left the house and its collections to her distant cousin Major-General Edward Stuart Wortley (1857--1934). When his younger daughter Elizabeth ('Bettine') married Montagu Bertie, 8th Earl of Abingdon, in 1928, he bought the castle and its contents from his father-in-law. The Abingdons sold Highcliffe and most of its contents in 1949, but retained the present group of furniture and some other pieces. After her husband's death in 1963, Lady Abingdon lived for much of the time with her close friends Mr and Mrs Tahu Hole, to whom she bequeathed all her personal possessions on her death in 1978. Tahu Hole died in 1985, and a year later his widow Joyce approached the Museum and offered the collection as a bequest. She died in December 1986, and in accordance with her will the Museum chose those items that it wished to add to its collections. Other items from the collection were sold to benefit the Museum, and the proceeds added to the funds bequeathed.

The inventory mark has not been identified, but makes it clear that this piece was not purchased new by Stuart.

Historical significance: This secretaire is of a standard form but of excellent quality. The finely figured veneers are carefully matched, and the combination of carved mahogany and gilt-bronze mounts enlivens the severe outline. The mounts in the form of theatrical masks, at the top of the front uprights, are unusual and of good quality, though unrelated to the more standard floral mounts elsewhere.
The chased motif of chrysanthemum heads, used on the mounts that form the capitals of the columns, also appears on the plinths of a pair of candelabra in the Museum's collection (M.105-1984), and on a commode that was sold at Sotheby's, New York, 11 October 1995, lot 67.

Fall-front secretaire, of mahogany, with chased and gilded mounts and slab of white marble (not original), made in France, 1815-30.

This fall-front secretaire was in the collection of Lord Stuart de Rothesay (1779-1845) at Highcliffe Castle in Hampshire. It is a high quality example of one of the standard Empire furniture types, unsigned but probably by one of the leading Parisian firms. 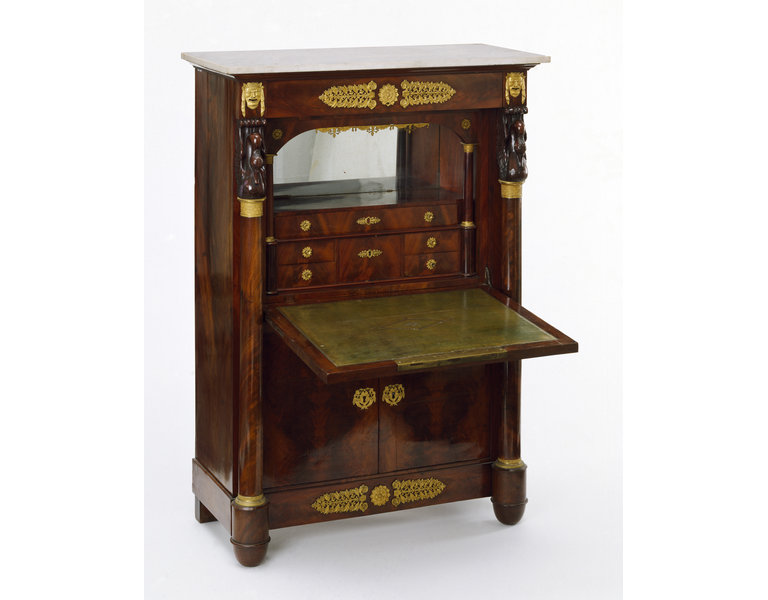