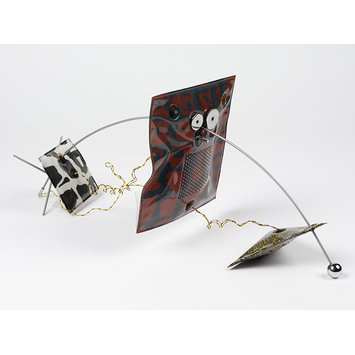 This radio was designed as part of a collection called '2x4 Tango', comprising four radios, all with different and unusual shapes. In this collection, designer Daniel Weil challenged conventions about the appearance of electrical products, introducing elements of colour, pattern, transparency and softness. The components of each of the '2x4 Tango' radios are separated and arranged along the aerial, which becomes the main structural element.

The limited production run of these radios was intended to subvert the normal manufacturing methods for electrical goods. Weil intended to make fifty of each design, but in fact no more than ten of each were produced.

The components of the radio are separated into three PVC covered fabric 'bags'. These are suspended from a curved aerial which is the main structural element of the radio.

The Muralla China radio was part of a collection called '2x4 Tango', which comprised four radios of different shapes.

The '2x4 Tango' was intitiated by Memphis but ultimately the radios were not produced by this influential Italian design company. In fact Weil's name appears on the invitation to the second Memphis collection, shown in Milan in 1982, even though the radio collection was not included. Weil showed the radios independently alongside the Memphis show. Each radio was intended to be in a series of fifty, though Weil does not believe he made more than ten of each.

Acquired together with W.9-1992 from the designer for the radio display in the Twentieth Century Gallery (Room 74).

Historical significance: The '2x4 Tango' designs evolved from Weil's experiments with the form of mass-produced electrical products (see Radio in a bag, W.9-1992). Weil experimented with colour, texture, pattern and transparency to see how these could transform the nature of the product. In each one the components of the radio are separated and reconstituted in different configurations on the aerial so that it becomes a new kind of object. Their softness and their limited run were intended to disrupt traditional notions of radios as hard and mass-produced.

Twentieth Century Gallery, Room 74:
Muralla China Radio
Designed by Daniel Weil (British, born Argentina, 1953)
with fabrics by Graham Fowler (British, born 1958)
Made by Parenthesis Ltd, London, Great Britain, 1982
PVC, silk and cotton, aluminium
W.10-1992
This radio is one of a series of four entitled '2 X 4 Tango', produced in a limited edition. Each one separates the components of the radio and reconstitutes them in different configurations on the aerial as a new kind of object. Their softness and their limited run were intended to disrupt traditional notions of the object as hard and mass-produced. [1992] 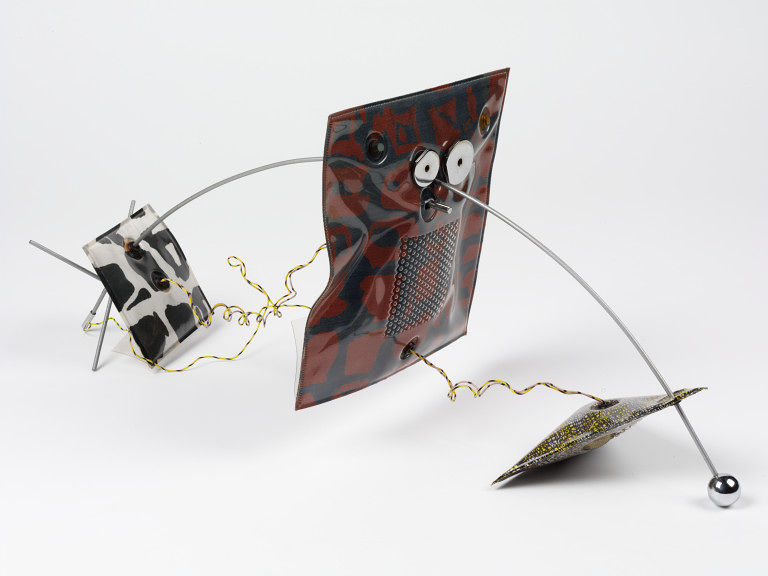