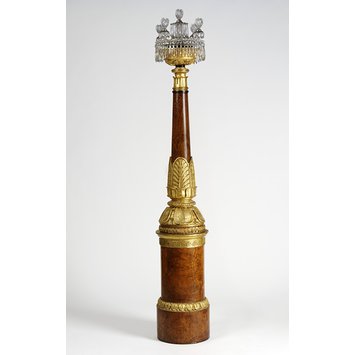 A torchère is a tall stand used for candles or lamps. This example is fitted with candle arms and glass pendants to increase the effect of light. It combines the use of pollard oak, a native wood, with exotic and Classical decoration, including a Greek key design and inverted lotus leaves.

Imposing candle stands were fashionable in Regency Britain. Brighter means of illumination became available during the Regency and far stronger light could be obtained from various new lamps, the earliest being the Argand lamp, available from about 1786. However the use of candles were preferred by many people, and this torchère was designed to hold candles.

Design
A tall, turned candelabrum veneered with pollard oak, articulated with gilt and ebonized moulded and carved ornament, and supporting a four-branch light fitting of silvered metal with cut-glass lustres. The main architectural elements are demarcated by gilt ornament: above the plinth a band of inverted lotus leaf, and at the top of the dado, bands of Greek fret and flower-filled guilloche. The transition from the base to the conical shaft is marked by large spreading inverted lotus leaves, a band of ribbon-twined flower-heads, and a cavetto collar; while the shaft above is sheathed with erect lotus leaves and palmettes. The shaft is capped by highly stylized lotus leaves, between tiers of mouldings above and below, the bottom and top ones ebonized rather than gilt. Finally, the underside of the 'dish' that supports the light fitting is decorated with acanthus and stylized bellflowers. The light fitting consists of a central silvered dish with a rim of numerous suspended glass drops, with four silvered branches each supporting a glass sconce and a circle of ten glass drops.

Decoration
Most of the gilt ornament is made of composition, pressed in a mould; only a small section at the top of the shaft is of turned and carved, gilt and ebonized wood. It is lapped over the pollard oak veneer, which was therefore clearly applied first. The veneer is in large, vertically joined sections: a single piece on the tapering shaft, four equal sections on the dado, and six unequal sections on the plinth; here the bottom edge has been carefully bevelled, to minimize the risk of tearing when scraped along the floor.

Construction
The candelabrum is constructed in four separable parts: a columnar base (plinth and dado), a conical shaft above this; a further gilded 'dish' that sits level with the glass lustres; and the silvered metal light fitting with lustres attached. The base and the shaft - apart from the very top, gilded and ebonized, part of the shaft - are constructed entirely of vertically-grained softwood, in concentric keystone-shaped segments, glued together and reinforced on the inside with vertically-grained softwood glue blocks at each joint. The columnar base (up to and including the gilt guilloche) is made from fourteen concentric segments, glued together, each joint being reinforced inside (in the hollow core) with between seven and nine glue-blocks. In the wide plinth the blocks are in two layers, which must have been blocked together before being cut out in segmental form, as the radial joints are exactly aligned with each other across the two layers. The dado is formed only of the inner layer of segmental blocks, which extends the full height of this columnar part. On the inside the original glue has dribbled down, showing which side the column was laid on to dry after being glued together.

The conical shaft - which sits loosely inside the base when assembled - is made on the same principle, in this case with seven concentric softwood segments, which are double-layered at the bottom, in the core to the spreading gilt-composition lotus leaves, and single layered above this. The top part of the shaft, from the ebonized band upwards, is made of solid beech, pieced out (one wide and one narrow section). The beech element appears to have been wholly ebonized, then water-gilded except for the top and bottom mouldings; within the gilded section the ovolo mouldings at top and bottom are burnished. At the bottom it is recessed to fit over a narrowed extension of the main softwood shaft. The dowel at the top appears to be an integral extension of the beech element.

After assembly of the softwood blocks, both the column and cone were turned, before the surface was decorated; first the veneer, and then the composition ornament were applied, and the composition finally oil-gilded. The top beech element may have been separately turned, carved and ebonized, before being fitted to the softwood core, and water-gilded. An ebonized surface shows behind losses to the gilding. The turning has left lathe marks at the bottom of the cone, and a lathe-fixing hole in the centre of the top, beech dowel.

The 'dish' that fits over the dowelled shaft is made in two tiers. The lower tier, with a central hole to fit over the dowel, is made of softwood, in four quarters, secured with loose tongues, and with moulded composition ornament applied to the underside, and gilded. The upper tier is in four quarters of oak; these may likewise be held with loose tongues, but this is concealed by a central metal disk, screw-threaded in the centre to hold the light fitting.

When acquired in 1987 the provenance for the candelabra given by Christie's was Don Pedro de Souza e Holstein, 1st Duke of Palmella, who was Portuguese Ambassador in London, and then by descent to the Visconde de Torraro; sold from Rua do Sacramento a Laga, 24, Lisbon, by Silva's on the premises 27th-29th April, lot 483; sold Christie's, 25th June 1987, lot 181.

Later correspondence in the curatorial files reveals that the candelabra and other pieces sold at Christie's did not belong to the Duke of Palmella but to the van Zeller family of Portugal. Carlos van Zeller inherited the Bullock furniture in 1914 from his parents and married Maria de Lancastre, granddaughter of the Duke of Palmella's daughter, Teresa, and the Count of Alcacovas. The Visconde Torraro (Luis de Lancastre) inherited the furnitue from Maria, his sister, and Carlos van Zeller.

A related Bullock torchère appears in a hand-coloured aquatint in Ackermann, in 1816, described as ‘Grecian Furniture’. It is shown to the right of a settee, and given the highly symmetrical arrangement of the furniture it is likely that it is one of a pair. The present torchère is one of a pair, suggesting that it was part of a more formal arrangement, perhaps, as Ackermann illustrates, flanking the windows of a boudoir (1809), or a sideboard in a dining room (1816). Ackermann illustrates single candelabra with a library sofa (1809), or together with a sofa, table and footstool for boudoir or lady’s dressing room (1825). The 'Grecian' torchère illustrated by Ackermann in 1816 is shown supporting an Argand lamp.

Lower section of a stand from a torchère, oak veneers with ebonised and gilt decoration, cut-glass and silvered metal light fitting; English; designed and made by George Bullock 1815-8

Upper section of stand from a torchère, oak veneers with ebonised and gilt decoration, English, designed and made by George Bullock, 1815-1818

Gilded dish for a torchère, English, designed and made by George Bullock, 1815-1818

Light fitting for a torchère, cut-glass and silvered metal, English, designed and made by George Bullock, 1815-1818

Almost certainly made in the workshop of George Bullock (1782/3-1818) and probably designed by Bullock himself. This candelabra is one of a set of four made as part of an extensive suite of furniture which Bullock made for the 1st Duke of Palmella (1781-1850) whilst he was the Portuguese Ambassador in London). [pre October 2000]
British Galleries:
George Bullock used British woods and British marbles but he often worked for export. One of his major commissions was for the British Government who furnished the house on St Helena in which Napoleon was held captive after the Battle of Waterloo. [27/03/2003]
Candelabrum (torchère)
1816–18
Designed and made by George Bullock (1782/3–1818)

Large candelabra were a prominent feature in a fashionable interior. As well as providing light, they had an imposing architectural presence.

This example has candle arms and glass pendants to increase the illumination. It was made by George Bullock, a cabinet-maker and sculptor who supplied furniture to Longwood, the house on Saint Helena where Napoleon spent his final years. The candelabrum combines native English woods with the Egyptian lotus motif and the Greek key pattern. [01/12/2012] 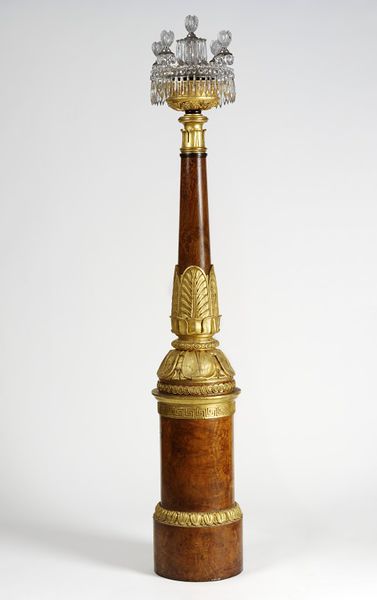