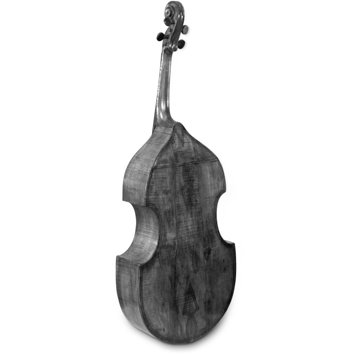 Richard Meares (1647–1725) was one of the most important viol makers and music publishers in London in his lifetime. He supplied at least two instruments to James Brydges, 1st Duke of Chandos (1647–1744), who employed an orchestra of musicians who doubled up as servants. Meares also published works by George Frederick Handel (1685–1759). At the time Meares made this instrument, viols ranging from treble to bass were often played, by both professional and amateur musicians, in an ensemble known as 'a consort of viols'.

'Belly of four pieces of pine, double purfled [bordered]. A formal floral device is inlaid and engraved in the centre. The back is a later replacement, made of two pieces of sycamore decorated with double lines of purfling with a fancy knot-pattern in the centre. The sides appear to be contemporary with the back. Thin wooden sidelining to the back, none to the belly. Neck with a spliced repair. Pegbox with a carved woman's head with her hear tied back with a bow, and with scrollwork carved in relief on the back. Tailpiece, attached to the hook-bar, and fingerboard are of ebony with ivory stringing. Six boxwood pegs. The neck is still partly fretted with gut.' Anthony Baines: Catalogue of Musical Instruments in the Victoria and Albert Museum - Part II: Non-keyboard instruments. (London, 1998), pp. 3 - 4.

Richard Meares, without / Bishopsgate, near Sir / Paul Pinders.[sic] London / Fecit 1677
Richard Meares ... made [this] in 1677.
Printed label. The last two figures of the date written in ink.

This object formed part of the collections of Carl Engel and was valued at £6 - 10 - 00, when acquired by the South Kensington Museum in 1882.

Meares's surviving instruments span forty years; an example in Lisbon dates from 1637. This instrument is one of the best preserved extant bass viols. The ornate tuning box, surmounted with a female head, and the somewhat conservative geometrical patterns on the back are characteristic of instruments of the period. On both the Baker and Meares viols, an inlaid scrolled pattern takes the place of the rosette.