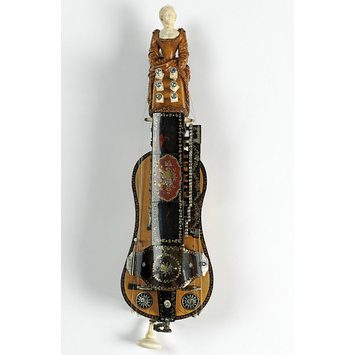 The hurdy-gurdy is a stringed instrument, shaped like the body of a guitar or lute, with a winding handle which turns a disc to sound the strings. The left hand presses the buttons to produce the melody, while the right hand rotates the disc to produce a background drone. It was a widespread instrument in Europe during the Middle Ages in both religious and secular contexts. Although used at every level of society it became particularly associated with itinerant minstrels, peasants, beggars and blind musicians.

The decoration points to the status of this instrument as a fashionable accessory, rather than an instrument to be played seriously. Nevertheless, from 1731 to 1733 the hurdy-gurdy was featured with orchestral accompaniment at the Concert Spirituel in Paris and the renewed interest in the instrument led to the production of a musical repertory. In 1739 the French composer Nicholas Chédeville (1705-1782) published Le printems, ou Les saisons amusantes (1739) an arrangement of Vivaldi's The Four Seasons for hurdy-gurdy or musette, violin, and flute.

'A small sized, highly ornamented instrument, made no doubt as a drawing-room toy. Guitar-shaped body of sycamore. The belly is edged with a band of tortoiseshell with silver and brass piqué work, and has two roses of pierced and stamped silver with sun motifs. The tailpiece, wheel-guard, and keybox lid are likewise decorated, the last having a central panel of reddish-brown lacquer also inlaid with a floral design. On the wheel-guard, a garland within which is a trophy of musical instruments. The main keys are similarly decorated. The short keys are set with paste imitation stones, as are the six ivory pegs. The finial of the pegbox is finely carved in wood with the figure of a woman, her neck and head being of ivory. Her open gown is pulled back to form the sides of the pegbox, while her petticoat forms the top which holds the pegs.'

The instrument was cleaned and restored in the Museum's conservation department in 1963.

During the eighteenth century rusticity was in vogue; Queen Marie-Antoinette of France (1755-1793) created her own village and farm in the grounds of Versailles between 1783 and 1784, and made an idealised version of the peasant life fashionable. The hurdy-gurdy, with its rustic associations, was taken up by the French aristocracy. Disguised as shepherds and shepherdesses, they played the instrument at the fêtes champêtres at Versailles, and ladies and gentlemen at court played this instrument as well as musettes (bagpipes). This small, unsigned but beautifully decorated instrument was more suitable for the drawing-room. The rustic associations of the hurdy-gurdy are reflected in the carved ivory and sycamore female figure on this instrument, who is dressed like an idyllic version of a peasant.

Traditionally, the hurdy-gurdy was a folk instrument associated with beggars and peasants. It became fashionable among the French nobility in the later 18th century as part of a vogue for all things rustic. The delicate floral decoration of this one, executed in expensive materials, highlights that it was a luxury object as much as a functional instrument.

The female is dressed like an idyllic version of a peasant and reflects the fashionable urge to go back to nature from about 1770 until 1789; Queen Marie-Antoinette of France played at being a Milk-maid at Versailles and Rambouillet, and the hurdy-gurdy, very much a pastoral instrument, become fashionable in Paris salons during this period. 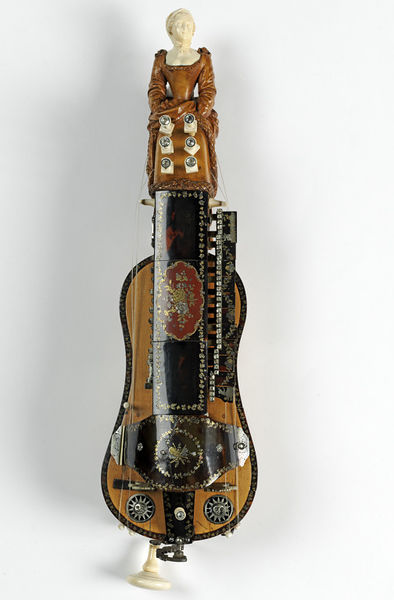