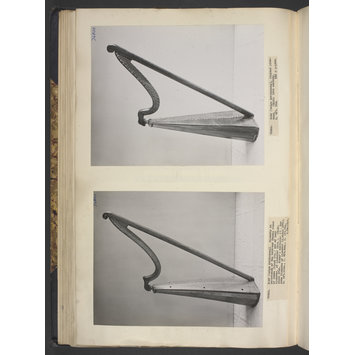 The Welsh triple harp has no pedals but is fitted with three rows of strings, the two outside ones tuned identically and diatonically (i.e. in a major or minor key), and the middle one chromatically. The instrument is said to have been made by John Richards of Llanrwst (1711-1789), Wales' leading harp-maker and player during the 18th century. It belonged to Augusta, Lady Llanover (1802-1896), a leading patroness of Welsh harpists and a champion of the Welsh triple harp.

"A high-headed harp with back of nine ribs of sycamore, similar to 16/1 [triple harp by David Evans, Museum no. 1740-1869], though much less elaborate. Slightly rising belly of two pieces of pine, undecorated, with six small soundholes and the string holes shod with iron staples. The post is undecorated. The neck terminates in a rudimentary scroll." Anthony Baines, Catalogue of Musical Instruments in the Victoria and Albert Museum - Part II: Non-keyboard instruments (London, 1998), p. 77.

J.R.
J.R. is painted three times on the neck.

This instrument originally belonged to Augusta, Lady Llanover (1802-1896), a champion of the Welsh triple harp.

TRIPLE HARP
Welsh; about 1740, with the initials J.R

Originally, the harp had a single row of strings tuned to a diatonic scale. A second row, which provided extra notes, was often sandwiched between two that were tuned normally and in duplicate, hence the term "triple harp". Such an arrangement was developed in Italy and Spain towards the end of the sixteenth century, and used in Wales until the 1890s.

It has been suggested that "J.R." stands for John Richards, harpist to Queen Charlotte.

Given by Lady Llanover. [pre September 2000]

The initials J.R. are painted on the neck of this harp, and were claimed by the donor, Augusta, Lady Llanover, to stand for John Richards. 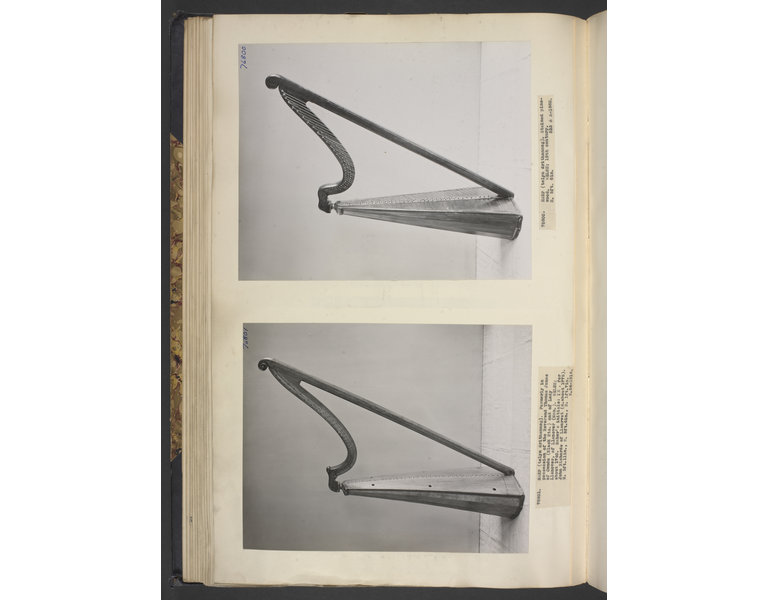