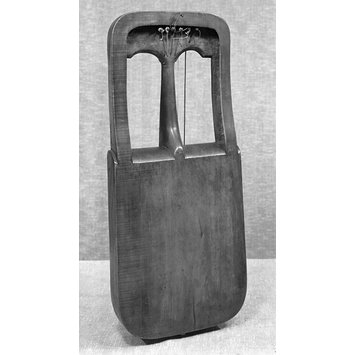 The crwth is a Welsh version of a type of lyre widely played throughout Northern Europe during the 11th and 12th centuries. It continued to be played in Wales as late as the 19th century, featuring in eisteddfods, where it was either plucked or played with a bow. This instrument is a copy of a crwth made by Richard Evans in 1742. Evans's crwth was restored in 1871 by Georges Chanot (1831–1895), a London violin maker and dealer of French origins. So it was most likely Chanot who made this copy, probably soon after 1871.

'Back, sides, arms neck and crosspiece carved from a single piece of sycamore. The sides increase in depth towards the base, and the arms are carved hollow at the rear. Flat belly of pine, 5 mm thick, with grooves along the edges and two circular soundholes. There is no bass-bar. The neck carries a thick and flat, rising fingerboard which extends a little way over the belly. The tailpiece is flat and shaped obliquely. The obliquely placed bridge has a short leg resting on the belly and a long leg which passes through the right-hand (bass side) soundhole to rest against the back; there is also a short central projection which does not reach the belly. The strings pass through holes above the nut to the rear of the crosspiece where they are tuned by six iron wrest pins turned from the front by a separate key. Of the six strings, two run clear of the neck on the bass side.' - Anthony Baines: Catalogue of Musical Instruments in the Victoria and Albert Museum - Part II: Non-keyboard instruments. (London, 1998), pp. 19 - 20.

This instrument was part of the collections of Carl Engel and valued at £5, when it was acquired by the South Kensington Museum in 1882.

English crwth, sycamore and pine, probably made by Georges Chanot of London, 1871-1880.

This instrument is thought to be a copy of the Richard Evans instrument of 1742, done by Charles Chanot, a Bond St. violin-maker, who restored the original, now at the Welsh Folk Museum, in 1871.

According to Canon F.W.Galpin, this instrument is a copy that Georges Chanot made of a Richard Evans crwth (1742) now in the Welsh Folk Museum, St Fagan's Castle, Cardiff. Chanot had restored the Evans crwth in 1871 (Anthony Baines: Catalogue of Musical Instruments in the Victoria and Albert Museum - Part II: Non-keyboard instruments. (London, 1998), pp. 19 - 20.). Baines dates the V&A crwth loosely as '19th century' but if it was made by Chanot, it was probably made some time in the 1870s. 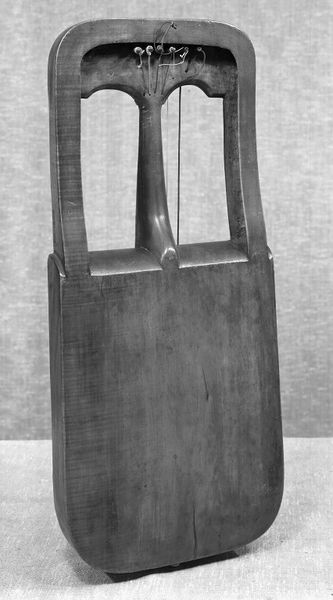