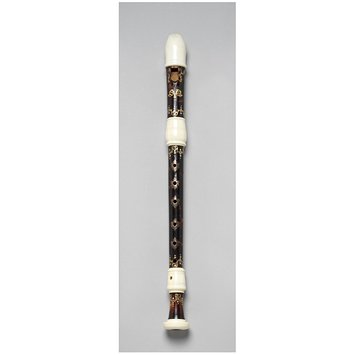 This exquisitely decorated instrument is unsigned but was probably made between about 1730 and 1750 in Naples, where furniture veneered with inlaid turtle shell was a speciality. The treble recorder was played in the key of F, and composers like Johann Sebastian Bach (1685 - 1750) and Antonio Vivaldi (1678 - 1741) wrote music for it. However, by about 1780 the recorder had lost its place in the orchestra to the flute, a louder instrument. Before the museum acquired this object, it formed part of a decorative trophy of old wind instruments that hung on a wall of the Paris apartment of Gioacchino Rossini (1792 - 1868), the great Italian composer of light opera.

Treble recorder of three joints, of turned fruitwood, veneered in turtle shell inlaid with gold piqué, silver and mother of pearl, mounted with ivory, plainly turned. The sections are turned and bored, the outer surfaces wrapped with turtle shell, which is overlapped and welded to itself after heating. The turtle shell would then be polished so that no line of joining is apparent.

This recorder was one of a number of historical wind instruments that formed part of a decorative trophy on the wall of the Paris apartment of the composer of light opera Giocchino Antonio Rossini (1782-1868). As yet the arms of the original owner (inlaid into the turtle-shell) have not been identified.

When it was acquired in 1869, the Museum's Art Referee, Matthew Digby Wyatt wrote from Paris on April 20th:
'This instrument in fine tortoiseshel inlaid with fine piqué work in gold is a fine and rare specimen of the (I believe) Neapolitan work of the middle of the last century. It bears inlaid in gold the arms -[sketch added here]. It belonged to Rossini's well-known trophy, and was well worthy to do so as it is a really fine specimen of the feasability of applying art to musical instruments of a similar class. It general form is somewhat this - [sketch added here] - and very elegant. Upon the whole I think the prices asked reasonable for this object and recomment the purchase. ' The recorder was purchased form M. Bauer, for 600 francs (24). Matthew Digby Wyatt's report included sketches of the instrument.

The technique of inlaying turtle shell with gold, silver and mother-of-pearl had originated in Naples at the end of the sixteenth century and the city remained noted for such work throughout the seventeenth and eighteenth century. Pieces decorated with these materials were popular souvenirs for travellers making the Grand Tour. Turtle shell was extremely soft, and could be worked with gentle heat and polishing, so that joins in the pieces used for covering items could be 'welded' together, as on this instrument, which shows not join lines in the veneer. The arms incorporated into the design of this instrument suggest that it was a particular commission.

Top joint from treble recorder, of fruitwood, veneered in turtle shell inlaid with gold piqué, silver and mother of pearl, and set with turned ivory collars. Probably made in Naples, Italy, ca. 1730-1750

‘35. Treble recorder
(Naples, 1750 c.)
Anonymous
Boxwood covered with tortoiseshell, gold piqué and mother-of-pearl inlay London, Victoria & Albert Museum, inv. no. 1124-1869
This unsigned and undated instrument is thought to have been made in Naples, a city where craftsmen like Gennaro Sarao and Antonio de Laurentiis made items covered with tortoiseshell and mother-of-pearl, ranging from tables to caskets and musical instruments. Like the Anciuti oboe [Cat. 43], this recorder formed part of a large musical trophy that hung in the salon of the apartment of the composer Gioachino Rossini (1792-1868) in Paris, before being acquired by the South Kensington Museum (now known as the Victoria & Albert Museum) in 1869 for £24.
James Yorke
BIBLIOGRAPHY
ENGEL 1874, p. 225; BAINES 1968, p. 86; COLLE 2003,pp. 24, 86-87.’

The treble recorder, played in the key of F, was widely used in both continuo
and solo music until about 1780, falling into disuse with the rise of the orchestra.
Italian composers of this period included Scarlatti and Vivaldi. [pre September 2000]

In Marvels of Sound and Beauty - Italian Baroque Musical Instruments, eds. Franca Falletti, Renato Meucci and Gabrilele Rossi-Rognoni, (Florence, 2007) the date has been given as "c. 1750".