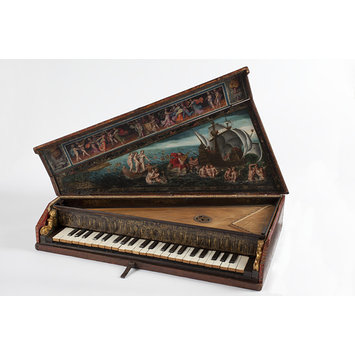 Octave spinets were portable keyboard instruments, widely used in private homes in Italy throughout the seventeenth and eighteenth centuries to accompany singing. Dr Charles Burney (1726-1814), the great English musicologist of his day, wrote in The present state of music in France and Italy (London, 1771): 'throughout Italy they generally have little octave spinets to accompany singing, in private houses, sometimes in triangular form, but more frequently in the shape of our old virginals; of which the keys are so noisy, and the tone so feeble, that more wood is heard than wire'.

The inside lid of this example is painted with the tale of Arion and the Dolphin, a suitable decorative theme for a musical instrument, as the story tells of a famous singer, from ancient Greece, who was rescued by a dolphin after being robbed and thrown overboard by pirates.

'The spinet can be removed from its outer case. The cypress is painted black, on which gold ground decoration is applied. There are sparse arabesques on the inner faces and a delicate arcaded pattern of portière motifs with figures on the panel behind the keyboard. Gilded cherubs form the key-blocks at the ends of the keyboard. The outer case, painted plain brown without, bears two paintings within on the lid and falling front. The larger painting shows a mythological scene, including a large ship and a merfolk. On the smaller hinged flap are depicted a number of dancing figures and musical trophies. (Some draperies added to the nude figures, presumably out of prudery, at some later date, were removed when the case was cleaned in 1964.) The outer case has a lining of cloth to protect the spinet as it is removed and replaced. The nameboard and mouldings are ebony, as is the jack-rail on which traces of the former decoration can still be discerned.'

Cypress body and soundboard, with sycamore bridge and pearwood wrest-plank; painted inside of lid and board above keys, with carved and gilded putti at each end of the keyboard

Many jacks had to be replaced when the instrument was restored to playing order by Mr John Barnes in 1965. The jacks originally had quill springs, Mr Barnes reported, but these had subsequently been replaced by brass wire springs (the new replacement jacks have plastic springs). The instrument was originally quilled and portions of these quill plectra were still present at the time of restoration. The jacks, made of pearwood, are weighted with lead and fitted with double dampers.

In 1965 it was observed that the tone was a little shallow compared with that of a full-sized spinet and that the lowest octave lacked the tone given by longer strings. However, the sound was bright, clear and adequately loud, and the key-noise not excessive. Mr Barnes suspected that the deficiencies Dr Burney observed in 1770 during his tour of Italy may have been due to poor maintenance which may have been general in Italy at that time, judging from the poor standard of the workmanship of the replacements and modifications found on this and several other old Italian instruments.

Octave spinet, Italian, about 1600. Body and soundboard of cypress, the name board decorated in grotesques. The painted inside of the lid illustrates the story of Arion and the Dolphin. The sharps are ebony and the naturals covered with ivory.

Small keyboard instruments like this spinet were portable and convenient. Integral cases allowed them to be closed up and carried around, then placed on a table to be played. Instruments were often decorated with musical imagery. This one shows the classical myth of Arion, who was kidnapped by pirates but saved by dolphins charmed by his music.

Cypress with sycamore and pearwood, partly painted and gilded; ebony and ivory keys [09.12.2015]
OCTAVE SPINET
About 1600; Italian
Body and soundboard of cypress, the name board decorated in grotesques. The painted inside of the lid illustrates the story of Arion and the Dolphin. The sharps are ebony and the naturals covered with ivory. The instrument's range is forty-five notes, C/E - c3.

Dr Burney reported in The Present State of Music in France and Italy (London: 1771) that with such instruments 'the keys are so noisy, and the tone so feeble, that more wood is heard than wire'.

Small keyboard instruments like this spinet were ideal for domestic use. Their softer sound meant that they were particularly recommended for women. Highly portable, they could be played anywhere in the house, often set upon a table. Although their cases were often painted, this is an unusually spectacular example, featuring Tritons and mermaids [5 Oct 2006 - 7 Jan 2007]

When the instrument was acquired in 1870, the paintings were attributed to Frederigo Zucchero. 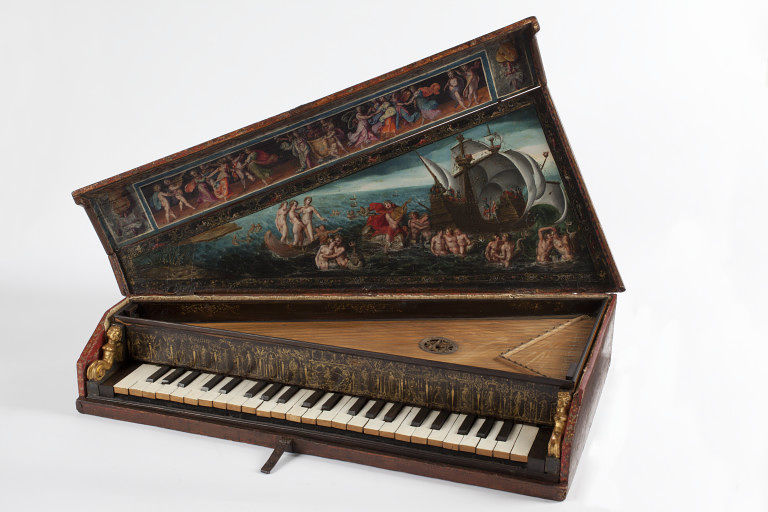