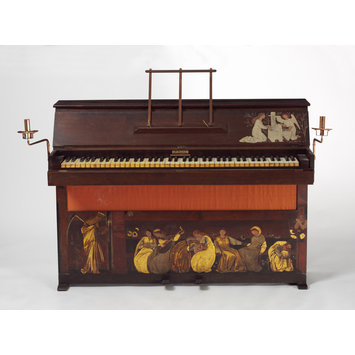 This modest instrument was made by Frederick Priestley, an otherwise unknown piano maker, and given as a wedding present to Edward Burne-Jones in 1860. He subsequently decorated it with a scene from the Medieval Romance, the 'Chant d’Amour' and an allegory of death. In her biography, The Memorials of Edward Burne-Jones, his wife referred to a picture of Death on the panel below the keyboard, 'standing outside the gate of a garden where a number of girls, unconscious of his approach, are resting and listening to music'.

1468
Registration number; Soundboard, next to Patent mark.; written; ink; About 1860

UPRIGHT PIANO, English, about 1860. Inscribed on the nameboard, F.Priestly, 15 Berners Street, Oxford Street; painted by Sir Edward Burne-Jones, with scenes from the "Chant d'Amour" inside the keyboard and Death and the Maidens on the lower half of the instrument. The instrument has a compass of eighty-two notes, CC - a4, with keys covered in ivory and the sharps in ebony. The body is of lacquered American walnut.

Edward and Georgina Burne-Jones were given the instrument by his aunt in 1860, and its simple design enabled the artist to paint the surface with the themes mentioned above. In her biography The Memorials of Edward Burne-Jones, Lady Burne-Jones wrote "On the panel beneath the keyboard there is a gilded and lacquered picture of Death, veiled and crowned, standing outside the gate of a garden where a number of girls, unconscious of his approach are resting and listening to music".

Attribution note: The piano has a serial number, which implies the case form was made on a large scale. However, the decoration by Burne-Jones makes it unique.
Reason For Production: Private 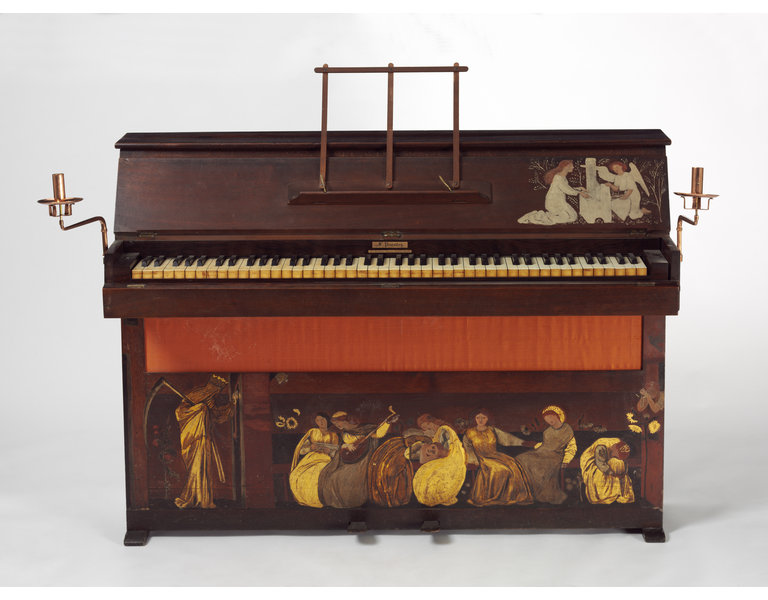