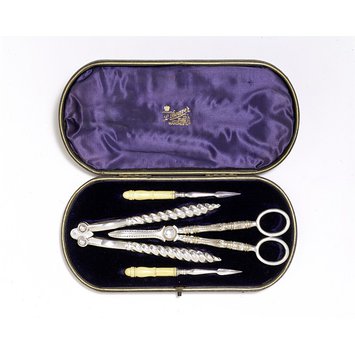 Object Type
The two arms of these nutcrackers are joined at one end by a hinge, and the tops of the arms are recessed to hold the nuts in place when cracking them. The swivel hinge allows nuts of different sizes to be cracked.

Design & Manufacture
These nutcrackers are made of plated steel. The electroplating process was used to cover the surface of a base metal with silver by the action of an electric current. People of limited means were therefore able to decorate their tables with items that had the look of silver, and thus conveyed wealth and status, but at a much more affordable price. At this date the steel would have had a copper wash before being electroplated.

Retailing
Nutcrackers could be bought individually for between 2s (10p) and 13s (65p) or (as here) as part of a boxed set. Boxed sets made ideal gifts and with the inclusion of nut picks and grape scissors could be used to eat the nuts and fruit of the dessert course more elegantly.

Manufacturer
The nutcrackers were made by William Hutton & Sons, a large and well-known firm of manufacturing silversmiths.

Mark of William Hutton and Sons

Manufactured by William Hutton & Sons, Sheffield
Most nutcrackers were silver plated as silver on its own was too soft to apply the pressure needed to crack open the nuts. Mappin Brothers sold similar plated 'nutcracks' in their catalogue of 1897 for 3s 6d (17.5p).

Historical significance: In 1897, Mappin Brothers sold boxes of two nut cracks and a pair of grape scissors with ivory handles for £2 8s.

Nutcrackers - plated steel, William Hutton & Sons, about 1880-1890
- as silver would be too soft for the intended use (i.e. to hold nuts in place while cracking them open), most nutcrackers are silver-plated, while some have silver handles with steel ends and hinge.
- In the William Hutton & Sons catalogue of about 1880, very similar nutcrackers, also plated on steel and with twisted handles, are priced at 6s.
- Mappin Brothers sold "Queen's" Plate 'nutcracks' in their catalogue of 1897. Their similar version with twisted handles, are priced at 3s 6d.
- Elkington & Co. sold electroplated nutcrackers individually and also in pairs with a pair of grape scissors, priced £2.


Grape Scissors - electroplated, late 19th century
- dining implement used to cut the stems of a bunch of grapes; although made in the general form of a pair of scissors, it has - instead of 2 cutting blades - 2 wide flat-faced blades, only one of which has a cutting edge. The handles are quite often very ornate and decorated with vine foliage.
- this example is quite plain : plated examples are illustrated in the William Hutton & Sons catalogue of about 1880. These are priced at 10s for a very plain example to 19s for a pierced and engraved example.
- Mappin Brothers electroplated silver grape scissors are priced at 8s in their catalogue of 1897. A solid silver pair of grape scissors, presented in a case, are priced at £3 7s 6d.

Box - leather, satin, velvet with retailer's name printed inside the lid in gold type. These types of presentation boxes are referred to in the catalogues of the time as 'morocco cases'.

William Hutton & Sons - this large well-known firm of manufacturing silversmiths and platers was established by William Hutton in Birmingham in 1780, transferring to Sheffield in 1832. The business continued under his son William Carr Hutton, who entered the firm's first mark in London, where the business had premises in Holborn. He was joined by his eldest son, Herbert Hutton, in 1864 and the firm became 'William Hutton & Son'. In 1869 they advertised as 'The Sheffield Fork & Spoon Manufactory...Platers and Gilders by Magnetic Electricity, Dessert Knives, Fish Carvers, Nutcrackers & Every Article for the Table'. Shortly afterwards, with the addition of sons Robert Hutton and James Edward Hutton to the business, the firm became known as 'William Hutton & Sons'. The firm acquired the business and plant of Robert Farell & Co, manufacturing silversmiths of London in 1893, and was soon after converted to a limited liability company under the name of 'William Hutton & Sons Ltd.' In 1902, they acquired the Sheffield firm of manufacturing silversmiths, Creswick & Co. They transferred to James Dixon & Sons Ltd. in 1930.

Electroplated nutcracker, made by William Hutton and Sons, Sheffield 1880-90.

British Galleries:
Most nutcrackers were silver plated, as silver on its own was too soft to apply the pressure needed to crack open the nuts. Mappin Brothers sold similar plated 'nutcracks' in their catalogue of 1897 for 3s 6d (17.5p). [27/03/2003] 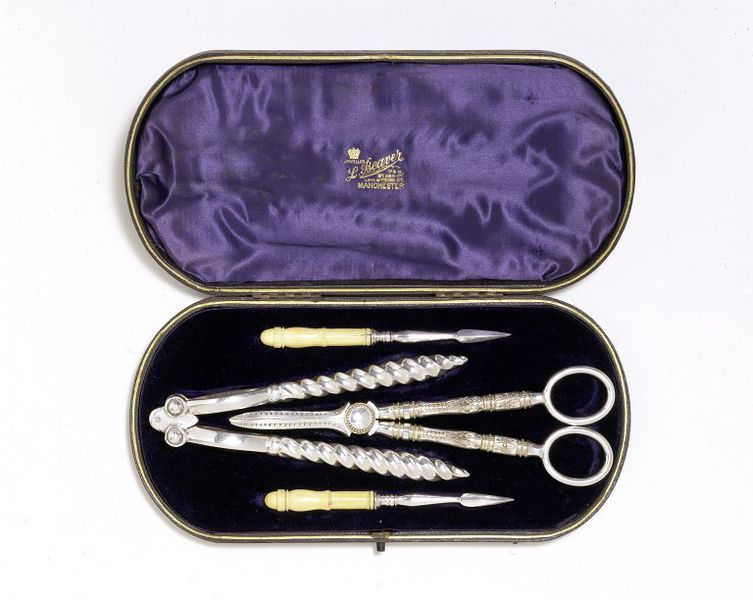