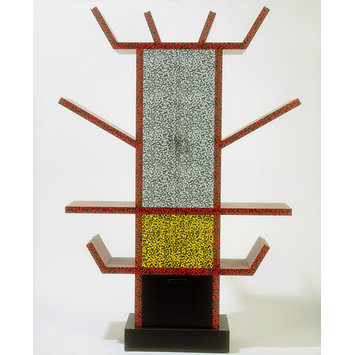 This sideboard was part of the first collection of furniture by the Italian Memphis design group. Ettore Sottsass designed it to combine storage and display while also serving as a room divider. The angled arms are intended to hold wine bottles. Its garish colour, pattern and strange winged shape went against the Modernist belief that form should follow function. The brash decoration, which opposed the purity of much undecorated minimalist furniture designed in the 1970s, was inspired by the everyday products of the 1950s. American 'diner' interiors and the wipe-clean furniture of the kitchenette influenced the use of laminated plastic. Although the patterns and materials of Memphis designs were drawn from popular taste, the furniture was too expensive for the average customer. However, by drawing on so-called 'low taste', the Memphis group introduced a new spirit of fun and fantasy into design.

CASABLANCA SIDEBOARD, 1981
Plastic laminate over fibreboard
Acquired, in part, with the assistance of Memphis

In 1981, the design group and manufacturer Memphis, led by Ettore Sottsass, launched its first collection, in which the designers explicitly challenged preconceptions of good taste. Sottsass believed that contemporary design had become sterile and wished to reintroduce wit, colour, and iconography. (Shiro Kuramata [see his metal mesh chair, no. 195] accepted Sottsass's invitation to be among the founding designers of Memphis.) The improbable form of the Casablanca Sideboard - part of Memphis' first collection - and its bold laminated decoration, inspired by popular taste of the 1950s, identified the design as post-modern. [1999 - March 2001]
"CASABLANCA" SIDEBOARD
Designed by Ettore Sottsass (Italian, b.1917)
Manufactured by Memphis, Italy
Plastic laminate over fibreboard
1981

Although at first viewed as a fringe group intent only on polemical overstatement, designs by the Memphis group have proved to be among the most important and influential of the 1980s. This sideboard is a prime example of their work, embodying their challenge to the canonical Modernist tradition in design.

Memphis objects are bright, even garish, disdainful of the blacks and whites of minimalist design; their forms are irregular and unexpected, never based on strict or even predictable deometry; where modernist design is sober and earnest, Memphis is witty, humourous and outrageous; and rather than look to the favoured sources of recent design, Memphis harks back to the low taste of a period regarded with disdain by purists, the 1950s.

Memphis's effect has been felt in many design fields, especially product design, particularly through the reintroduction of brightly coloured surface decoration.

Although first viewed as the work of a fringe group, Memphis designs have proved to be among the most important of the 1980s. They have influenced other designers to employ brightly coloured, patterned surface and explore the possibilities of plastic laminate. Memphis furniture is intentionally humorous and garish and represents a direct assault on the traditional values of classic Modernist as well as 1970s minimalist design. [1992-1999] 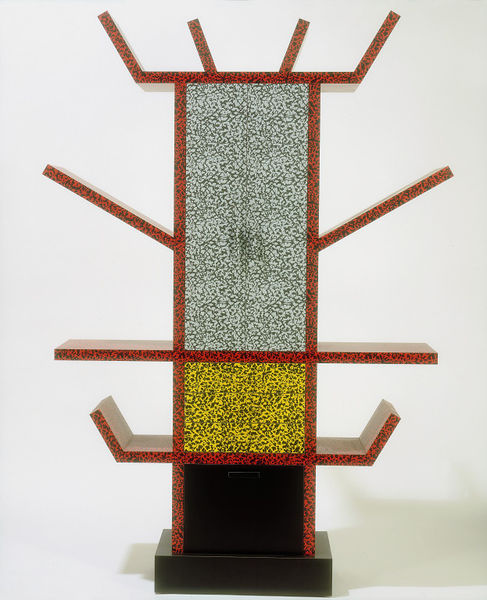