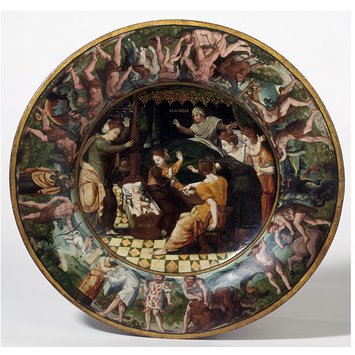 After a Florentine mother had given birth, her friends would bring her refreshments on wooden trays or deschi di parto specially painted for the occasion. By 1600, ceramic bowls in maiolica became increasingly popular for this purpose, and so woodworkers and turners produced wooden bowls in imitation, in order to keep up with the fashion. These shallow wooden painted bowls were known as tafferie di parto and were decorated with birth scenes. Some were based on religious scenes such as the Nativity, others on scenes from ancient Greek myths, as here, showing the hero Hercules as a baby when he strangled two predatory snakes sent to kill him in his cradle. This scene depicts an interior with a bed and carved wooden cradle, the sort of furniture that would have been found in a prosperous Florentine house in the early 16th century. These items help illustrate and bring to life surviving household inventories.

Like its maiolica counterparts, the outside of this bowl has been painted with a large arabesque pattern and decorated with 'grotesque' ornament based on ancient Roman decoration. It shows the extent to which grotesque decoration was applied to domestic objects, as well as palatial ceilings and walls.

Painted bowl, the inside of which depicts the Birth of Hercules , with various incidents in his life including some of his labours and his death, painted round the rim. The centre of the bowl narrates the story of the infant Hercules strangling a pair of snakes in his cradle, while his mother, Alcmena, sitting up in bed, and her female attendants look on in horror. The following stories are depicted on the rim of the bowl, working from the bottom, anti-clockwise: Hercules and the Nemean Lion; Hercules slays a winged dragon; Hercules and the Cretan Bull; Hercules and the Lernean Hydra; Hercules and the 'Pillars of Hercules'; Hercules and Cacus; Hercules wrestling with Antaeus; Hercules with Cerberus; Hercules with another monster; The Rape of Deianeira by the centaur Nessus; the slaying of Nessus; Hercules putting on the robe tainted with Nessus's poisoned blood and consequently being consumed by flames. On the outside of the bowl, both the rim and brim are decorated with cream-coloured amorini, satyrs, grotesques and herms on a green background, and the base with a black moresque pattern on a green background.

This item was purchased by the South Kensington Museum for £70 from S.H.Whitehead

In the 15th century, it was the custom in Florence to bring mothers who had just given birth various refreshments laid out on deschi di parto or birth trays, specially painted for the occasion. By about 1500, painted maiolica bowls were becoming more popular: these were often painted on the inside with biblical births and flamboyant moresque patterns on the outside. So as to keep up with the latest fashions, woodworkers and turners produced wooden bowls, known as tafferie di parto, decorated in a similar manner. Most surviving examples, like this one, date from the 1530s. They were originally often supplied with special cloth covers and sometimes proudly fixed to the walls of a bedchamber, as in the case of a certain Antonio di Nicolaio of Florence, whose inventory was taken in 1570.

Painted bowl, the inside of which depicts the Birth of Hercules

In the centre of the birth of Hercules is depicted, and round the rim the labours of the hero. It is in the manner of Pordenone or of Battista Franco. This may well have been a gift to a mother on the birth of a child, but it is also possible that it was designed as a pattern piece for the decoration of maiolica. The back is painted with grotesques in grisaille. [pre October 2000]

Battista Franco (?1510 - 1561) was born and died in Venice, but worked in Florence between 1536 and 1541, under the patronage of Dukes Alessandro and Cosimo dei Medici. When this work was acquired in 1875, it was described as being in the manner of Pordennone or Battista Franco. Birth dishes and Birth Bowls were mostly made in Florence, and this could date from Battista's years in that city. 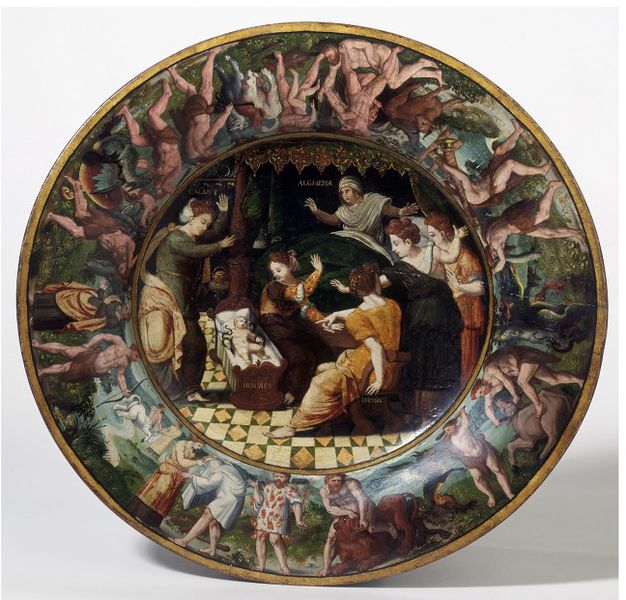