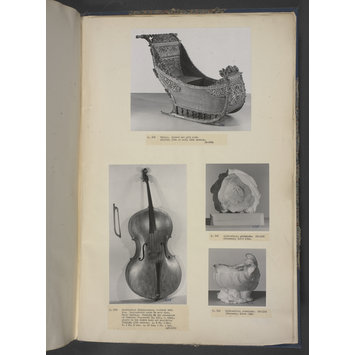 This giant double bass was owned by Domenico Dragonetti (1763-1846), a flamboyant virtuoso from Venice, who settled in England in 1794. Known as 'il Drago' (the Dragon), he enjoyed great success and his playing of this instrument was likened to 'a tame lion, which having lost its ferocity retained all its strength and grandeur'.

Dragonetti collected snuff boxes and dolls, and he was notorious for his very poor command of English, even after having lived in the country for many years. In about 1830 Dragonetti presented this instrument to the 3rd Duke of Leinster (1791-1874), who in turn presented it to this museum, following the 'Special Exhibition of Ancient Musical Instruments', in 1872.

Duke of Leinster
owner's mark; English; On one of the brass plates of the machines of the pegbox.; engraved

D.Dragonetti
owner's mark; On one of the brass plates of the machines of the pegbox.; engraved

"For example, the huge, approximately 9ft high, 17th century Double Bass (487-1882) presented quite a challenge. Attributed to the Italian, Gasparo de Salo, this instrument formed part of the collection of the celebrated double bass soloist, Domenico Dragonetti (1763-1846) who presented it to the Duke of Leinster. In 1872, the Duke presented it to the Victoria and Albert Museum. By 1964, the Double Bass was in urgent need of restoration since it was, quite literally, beginning to fall apart at the seams. The structure (the back and ribs) was made of sycarnore and the belly of pine. Shrinkage had taken place, particularly on its back where a long strip of sycamore had been added to make up the 3/8" gap. This strip was removed during restoration. Prior to closing the gap, other splits running along the ribs were closed by pressure from clamps after the application of Scotch glue. The corner blocks also were temporarily removed to enable the clamps to close these splits on the ribs and, once the rib joint had been re-aligned, one-inch linen tape was applied internally to strengthen the joints. For the crack along the back, I found that a simple, and inexpensive, method of fixing and holding a long split in position was to use a 1" linen tape to criss-cross the instrument to form a soft cage. Padded blocks could then be inserted under the tape at various points to apply pressure where required in order to hold the re-aligned and glued area of the instrument in position. This proved very effective. It took three months to take this double bass apart and put it together again, which is the longest time I spent on any one instrument. lt is now on display at the entrance to the Musical Instruments gallery (Room 40A; via the Costume Court)."

3/10 DOUBLE BASS. Italian; seventeenth century. Fig. 25.
No label.
The belly of this giant bass is of five pieces of pine, with purfling (two black strips, one white) 1 cm wide. The f-holes, un-nicked, are 34 cm long and the bass bar is some 3 cm deep. The back is of three pieces of sycamore, with two internal cross boards, and is half-cut and has double purfling in black, unlike the belly. The neck, replacing an earlier neck which was about 4 cm wider at the root, carries a scroll head with machines for three strings. The brass plates of the machines are engraved Duke of Leinster on one side and D. Dragonetti on the other. The tailpiece was originally drilled for four strings and later adapted for three.

This instrument, unique among old basses on account of its size, formed part of the collection of the celebrated double bass soloist Domenico Dragonetti (1763-1846), who presented it to the Duke of Leinster who in turn presented it to the Museum. Its one-time ascription to the hand of Gasparo da Salo is now considered erroneous.

DOUBLE BASS
Italian; about 1700
The neck is a replacement and the head has been althered. 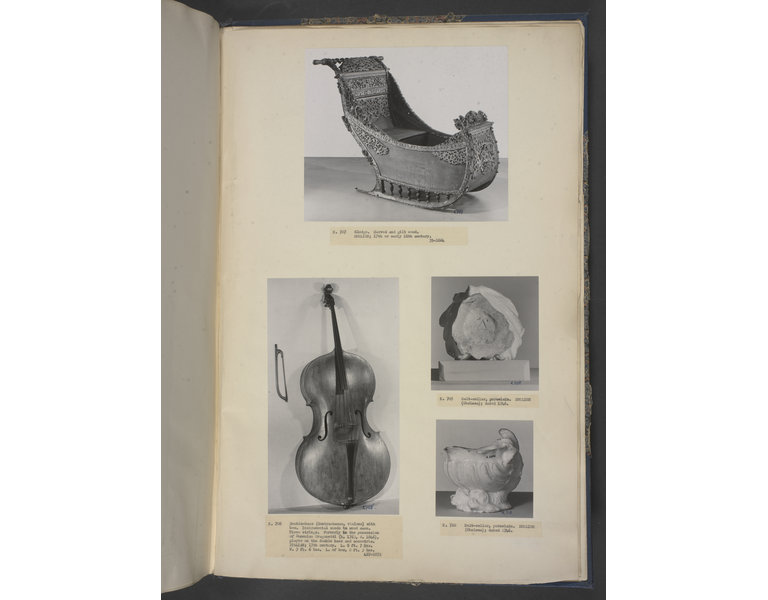