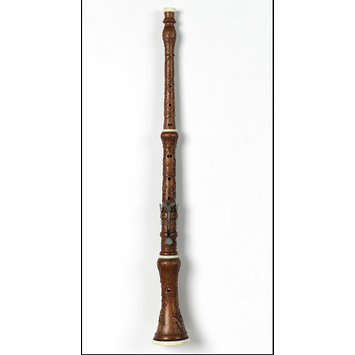 The term 'oboe' derives from hautbois, the French for 'loud’ or ‘high wood[wind]'. Oboes are high-pitched, three-jointed reed instruments which developed from the shawm, a medieval version with an opening like a trumpet and a more raucous tone. This development of the oboe took place in the mid 17th century at the French court, among a group of instrumentalists and instrument makers in the Grand Ecurie, the royal musical ensemble used to accompany open-air ceremonies and festivities. Its invention is often ascribed specifically to Jean Hotteterre (d. 1690), one of the Grande Ecurie musicians during the reign of Louis XIV. The oboe rapidly proved versatile as a solo, chamber and orchestral instrument, its use spreading rapidly from France to Germany, Italy and England.

The bell of this oboe is decorated with two carved scenes representing contemporary men and women in fashionable dress. One shows a man and woman dancing to the accompaniment of a violin. The other depicts a woodwind ensemble of two oboes, a tenor oboe and a bassoon, playing from part-books laid flat on a table. Until the appearance of music stands in the 1700s, this was the normal way of playing from sheet-music.

Boxwood, in three joints, ivory mounted. The joints are carved in low relief with laurel leaves and berries, with acanthus motifs over the sockets. The bell, which has two vent holes and an internal terminal flange, is carved with two musical scenes: on one side, a man and a woman dancing to the violin; on the other, a group of four musicians playing oboes, tenor oboe and bassoon from part books. They wear late seventeenth-century costume. Two double holes, three silver keys, including a central closed key for C with round key-plate and fish-tailed touch, flanked by two closed E flat keys with square key-plates.

Stamped 'W. BEUKERS' overstamped on a previous stamp with the name enclosed in a strap, partially erased and now barely legible but apparently ending in 'en'.

W.Beukers
Makers's mark; signature; Latin; On the bell of the instrument; stamping

.... EN [earlier worn away stamp]
Makers's mark; signature; Latin; On the bell of the instrument

This instrument is thought to be Dutch, although only possibly by W Beukers, since his name is stamped over another, illegible name. In 1992 Jan Bouterse saw the instrument and thought that it could have been made any time between about 1690 and 1710 by a lesser maker "who tried to join in the successes of the big names". A dating of 1690-1700 is also strongly suggested by the style of fashionable dress represented in the two intricately carved scenes around the bell of the instrument. Since the oboe only developed in France in the early to mid 17th century, this is a relatively early example, which highlights the instrument's rapid growth in popularity and spread across Europe.

This is a fairly early example of the oboe, a reed instrument, developed from the shawm and derived from "hautbois", French for "loud wood". It was instrument-makers such as Jean Hotteterre who worked for the French court around 1650 who gave it its three jointed structure. A musical ensemble and dancing figures are depicted. A few of W. Beukers' wind-instruments, mostly recorders survive, and it is thought that he was Dutch.

The instrument is stamped W.Beukers, but there is an otherwise indecipherable name below it, ending in "en". Jan Bouterse thinks it was made any time between about 1690 and 1710 by a lesser maker "who tried to join in the successes of the big names". 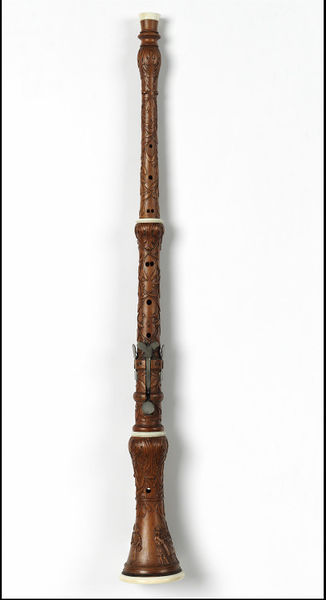