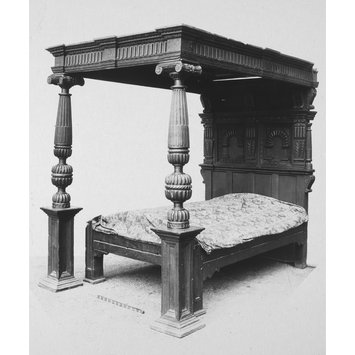 On loan to Shrewsbury Museum and Art Gallery, Shropshire

Bedstead, walnut inlaid with holly and bog oak. The carved and inlaid head-board of architectural character has pilasters, brackets, and inlaid sunk panels; the panelled tester with elaborately carved and moulded cornice is supported by two bulbous, gadrooned and fluted bed posts with square bases and large Ionic capitals. These stand clear of the bedstock, the frame of which has vertical holes for the bed-staves used to retain the bedclothes in position. The frieze of the head board is inlaid with the initials R. C., and the date 1593.

R.C.
This possibly refers to Reynold Corbet, Justice of the Common Pleas for Elizabeth I

This bedstead was formerly the property of the family of Corbet, of Moreton Corbet Castle, near Shrewsbury. The back, in addition to the initials R.C., has carved upon its console brackets a figure of a crow or corbeau, the Corbet crest, which is also inlaid in bog oak upon three sides of the cornice of the tester.

Purchased by the Museum in 1867 from William Chaffers, a prominent London-based collector, dealer of curiosities and the author of several books on antiques. The price was £50 (RP 17135/66).
A memo dated June 26th 1866 by J.C. Robinson notes:
"The carved oak bedstead, sent on loan or on approval by Mr Chaffers, might be left at present on the former footing. The slender balance of the current year grant will be required for objects of more importance, or which more urgently call for immediate consideration. Its purchase might perhaps be taken into account at a more favourable time but Mr Chaffers should be plainly given to understand that the museum in [indeciph.] it on loan, is not in any way pledged to its ultimate purchase."

At some time after 1929 it was displayed with the crewel work hangings (museum no. T.13-1929). Black and white photographs of this set-up are on VADAR, under the number of the hangings.

On long-term loan to Shrewsbury Museum and Art Gallery since 1982. Displayed at Rowley's House, Shrewsbury, 1982-2013. Moved to new premises in the Old Music Hall, Shrewsbury in September 2013.

bedstead of walnut inlaid with holly and bog oak and inscribed 'R.C.', England, 1593

The headboard, tester, and bed posts are elaborately carved. The frieze of the headboard is inlaid with the date 1593 and the initials R.C. carved on the headboard and inlaid on the frieze of the tester are crows, the punning crest of the family of Corbet of Moreton Corbet Castle, near Shrewsbury, whose property the bed originally was. [pre October 2000] 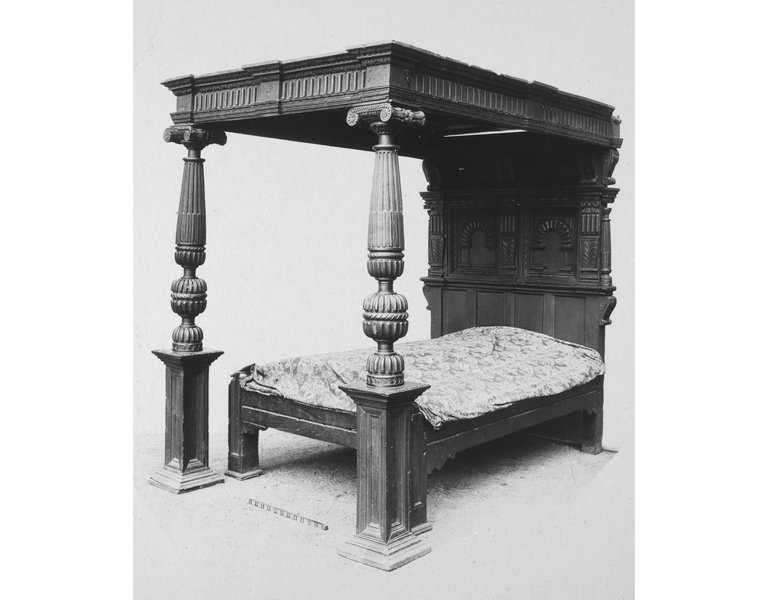