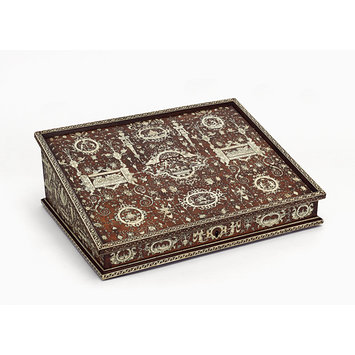 This writing box is unsigned and undated but it bears the coat of arms of Francesco Maria II, Duke of Urbino (reigned 1574 - 1626). His palace in Pesaro on the Adriactic Coast contained a number of workshops for artists and craftsmen ranging from watchmakers and silversmiths to painters and illuminators. This piece is decorated with an elaborate inlay characteristic of German gunstocks made from about 1590, but it could well have been made in the ducal workshops at Pesaro by one of the many German woodworkers who were widespread throughout Italy at this time. The inside of its lid is decorated with two cartouches, one with the Duke's arms and the other left blank, and so it was presumably intended as a ducal present. Writing boxes like this also served as a reading desk for bibles, hence the abundant use of religious motifs both inside and out.

Walnut writing desk with sloping lid and moulded edges, fitted with three drawers and compartments. All the outside and inside surfaces (except the undecorated base) are inlaid with what appears to be ivory, and possibly some horn, engraved, arranged in the form of strapwork cartouches interlinked with grotesques, trophies, birds and hunters. The cartouches contain the arms of Francesco Maria II, Duke of Urbino, (reigned 1574 – 1626) and stories from the bible, as described below. The base moulding is inlaid with vitruvian scroll, and other repeat designs decorate the borders of the lid.

Inside the desk is an open rectangular well with a full-height fitted unit along the back and right. Along the back the unit consists of a narrow recess at the bottom, possibly originally fitted with a single, wide drawer, three small drawers (fitted with stud handles of ivory(?)), and a full-width open tray, inset at the right end with a hinged wood lid which opens on a well, perhaps intended for an ink bottle. The right side of the unit consists of a well with a lift-out tray made of ebony, probably a later addtion. The deep tray has four sections: two small, square compartments (perhaps fitted with lift-out upper trays), a rectangular compartment with removable, bevelled lid, and a longer rectangular compartment with a lift-out upper tray.

Left side: oval cartouche with the Miraculous Draught of Fishes
Right side: oval cartouche with Jonah and the Whale.
Front: four strapwork cartouches with cityscapes.
Two rectangular frames, decorated with grotesques, go round the corners at the back: the one on the left has two opposing satyrs and the one on the right one two opposing warriors.
Back: central rectangular frame surmounted by camels in the top corners with cranes resting on their humps. Within that frame ia a Winged Victory flanked by two charioteers. Either side of the rectangular frame are two oval cartouches either side with boats and fishermen (possibly references to St Peter and St Andrew fishing on the shores of Lake Galilee). Vitruvian scroll runs along the bottom moulding of the desk and a thin vegetal scroll along the top.

Inside
The inside of the lid is decorated with a large oval cartouche containing the crucifixion in front of a rolling landscape with hunters and other figures, a town and beyond, the sea with ships; to the left the coat of arms of Francesco Maria II d’Este within the collar of the Golden Fleece, and (right) a blank cartouche for another coat of arms. The front of the drawer unit with a portico with four caryatids with baskets on their heads, with swags. On each drawer front is a cartouche with townscape. On the back wall of the writing desks are four cartouches for each of the four apostles. Both sides of the central well of the desk are decorated with angels (one female, one male) with censers(?). A lozenge frieze runs along the top edge of all the upper surfaces.

Construction
Dovetails are cut into the front and back of the desk (like an Italian cassone), but they are mostly concealed by walnut veneer plaques at the front. The underside consists of a shallow-chamfered panel held in position by four overlapping slats of wood. The desk is fitted with a modern lock, stamped with a crown and BARRONS and the two lid hinges are replacements for smaller originals that were fitted on the outside of the base and the inside of the lid. The drawers are dovetailed, with the bottoms glued into rebates, with spring catches to prevent movement in transit. The fronts glued.

The desk has been restored; on the inside of the lid, bone inlay has been re-set into rectangular strips of wood inserted to stabilise the lid (there is a long, lateral split across the lid). At both sides of the lid underside, a narrow strip of walnut has been added The moulded, mitred border of the lid is decorated with stringing, scrolling stems and strapwork along all four edges, overlapping small areas of the design, and it has been suggested that it may be a later addition. Some areas of inlay have lost definition, presumably as a result of scraping the surface

Heraldry
Tierced in pale
1. Per fess a) the Empire (single eagle); b) Montefeltro
2. Papal augmentation
3. Per fess a) an oak tree (Della Rovere); b) Paly of four. i) Hungary, ii) Sicily, iii) Jerusalem, iv) Aragon

Walnut inlaid with engraved ivory, and probably small areas of horn; fitted with an internal tray of ebony

INRI
Jesus of Nazareth, King of the Jews.
Inscription placed above Christ's cross in cricifixion, engraved on the inside of the lid.

This desk is emblazoned with the with the coat of arms of Francesco Maria II, Duke of Urbino (1549-1631), who reigned from 1574 until his abdication in 1626. His arms, on this box, are set within the Order of the Golden Fleece, which was conferred upon him in 1586. Therefore this item would have made between 1586 and 1626. The desk has no signature or date but there is also a space left blank for another coat of arms, so this item was probably intended as an princely gift. This desk was acquired by the museum in 1958 but nothing is known about its earlier provenance. Francesco Maria was a notable book collector who founded a library of predominantly printed books, based less on their 'rare material qualities' than their 'intellectual usefulness'.

Historical significance: Italian princes did not look exclusively to artists and craftsmen from their own country to produce luxury items. By about 1550 German woodworkers, especially those near Ausgburg, were renowned throughout Europe, and their work considered prestigeous enough to be thought a suitable gift from a prince or grand duke. This item is an important example of such a process.

This writing desk could have been made in Austria or Southern Germany by gunstock-makers like Wiguleus Elesser (the Elder or Younger) or Caspar Lickinger of Günzberg, who made a similar desk for Schloss Ambras, near Innsbruch (Austria) in 1592, or else by a German craftsman from the extensive workshops in Duke Francesco Maria's palace in Pesaro. It should be remembered that many German woodworkers, such as cabinet and lute makers, came to work in Italy during the 16th century. Hayward suggests that it was perhaps made by a gun-stock maker(who generally only signed presentation pieces) rather than a cabinet-maker. He suggests that the quality of engraving on boxes and gunstocks improved towards 1600 "possibly because it became the practice to employ professional engravers instead of entrusting the work to a member of the gun-stocker's workshop." (p.179) He concludes that without further evidence the desk cannot be attributed to Lickinger because of the "considerable number of skilled Büchsenschafter [gun stock makers] throughout the area of Teutonic culture who were capable of executing similar inlay work." (p.180)

During the 15th century a well-appointed study would have contained a built-in desk unit. Around 1500 a new type of portable writing-desk that could be placed on any available table, became popular. It was of Spanish- Moorish origin, and consisted of a shallow desk with sloping lid for writing on (or resting a text for reading), which contained drawers and compartments for pens, inks, papers and seals. Its size and smooth bottom meant that it was ideal for travellers. Only very grand ones are fitted with feet, which would have been impractical for most travellers. It is clear from Erasmus' fundamental Latin handbook of manners and civility for schoolchildren that the contents of such desks were not just personal, but private. Renaissance images of scholars and ecclesiastics often show them in the act of writing at a sloping writing-desk. Most 16th and 17th century desks were probably neat but plain, while those that have survived tend to be elaborately decorated with veneers inlay or carving.

Adapted from Dora Thornton, The Scholar in his study

Warren Boutcher cites payments by the Duke at his palace at Pesaro, for the 'products of scribal culture' including, 1597 a ‘scrittorio longo d’Ebano Tedesco’ (August, 20 scudi), and in 1614, for a ‘Scrittoio di noc[e] del sordo’ (September, 12 scudi), possbily an item made by or given to the painter Antonio Viviani (referred to as ‘il sordo d’Urbino’). (Florence, Archivio di Stato di Firenze, Urbino, cl. III, fil. 23).

Writing desk for the Duke of Urbino
About 1600

The highly skilled German woodworkers who made this desk may have been based at workshops at the DUke of Urbino's palace in Pesaro. Rulers with court workshops were able to control the manufacture of luxurious objects, which could be used as diplomatic gifts.

In the interior of the desk are the arms of Francesco Maria II, Duke of Urbino from 1574 - 1626. The medallions on the top are copied from engravings of biblical subjects by Etienne Delaune (1519-83). The desk was probably made by a gunstock-maker, probably as a royal gift: its quality is of the highest. [pre April 2001]

This writing desk, which bears the arms of Francesco Maria II, Duke of Urbino, could have been made by Caspar Lickinger, keeper of the Günzberg Armory, who made a similar desk for Schloss Ambras, near Innsbruch (Austria) in 1592. It might also have been made by a German craftsman from the extensive workshops in the Duke's palace in Pesaro. 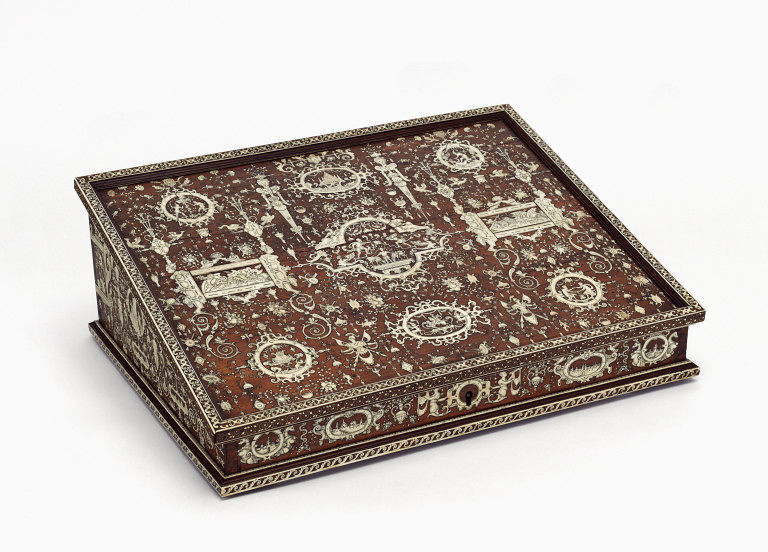