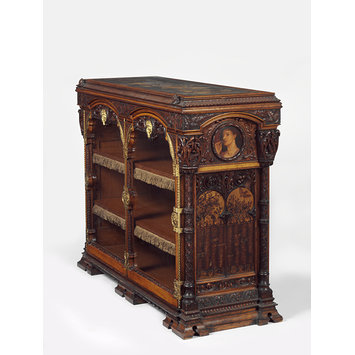 The miliary tailor John Jones died in 1882, bequeathing to what is now the Victoria and Albert Museum his extensive collection of largely seventeenth- and eighteenth-century French fine and decorative arts, along with three bookcases, of which this is one.

Jones commissioned a young architect, Charles Forster Hayward, to design four bookcases for his chambers above his business premises at 6 Regent Street. They were made between c.1858 and 1863 by John Howard & Sons of Berners Street. The first (c.1858; 1079-1882) was of double height and made to contain the prizes of Jones’s library, copies of Shakespeare’s first three Folios (1623–64). Three low carved oak bookcases followed; the first (1859; private collection) was elaborately carved but has no painted decoration, and was not part of the Jones Bequest. It was followed by a bookcase which was painted and partly designed by Edward John Poynter (1860–1; 1081-1882) and finally, this one, painted by Dante Gabriel Rossetti (1862–3).

Hayward may have first become aware of Rossetti’s work in January 1859, when he visited the first major exhibition held by the Hogarth Club, a short-lived Pre-Raphaelite venture. In 1862 numerous examples of painted furniture were displayed in the Medieval Court of the London International Exhibition, including the ‘King René’s Honeymoon’ cabinet (1861; V&A W.10-1927) designed by John Pollard Seddon (1827–1906). It incorporated ten panels painted by members of Morris, Marshall, Faulkner & Co., including two by Seddon’s friend Rossetti. Hayward had probably known Seddon since the late 1850s, and it was through Seddon that he approached Rossetti in relation to Jones’s final bookcase, asking the artist to paint two roundels to match those on the Poynter one.

The titles of Flos and Fructus are inscribed towards the upper left edges of the roundels in medieval style lettering. Flos clutches a red rose, symbolic of love, and appears to be modelled on Fanny Cornforth (née Sarah Cox, 1835–c.1906), artists’ model and Rossetti’s intimate companion. Fructus is a portrait of Agnes (‘Aggie’) Manetti (dates unknown), another of Rossetti’s models. Jones must have approved of the roundels, and Hayward probably persuaded him that Rossetti should provide painted decoration for the four panels below them. After some discussion regarding the subject of these panels, Rossetti painted wattle fences, recalling those made of hazel that he would have seen at the Morris’s home, Red House, Bexleyheath, Kent. Rossetti also followed Hayward’s suggestion of filling the tops of the panels with the heads of trees. The trees are populated with birds, the inclusion of which complements the romantic theme of the roundels, as emphasised by Rossetti’s choice of a bird that same year to symbolise love and loss on a watch case (untraced) for which designs survive. The top was made of enamelled slate using a technique patented in 1840 by George Eugene Magnus (1801–73), proprietor of the Pimlico Slate Works.

In February 1859 Hayward attended a meeting chaired by the critic John Ruskin (1819–1900) at which Venice was discussed, falling under the influence of the author of The Stones of Venice (1851–3), who called for architectural ornament to represent nature. The formalised and densely arranged carving on the Poynter and Rossetti bookcases reflect Ruskin’s influence as well as Jones’s fondness for carving. The finest parts of the carving were executed by William Henry Baylis (1836–1909) – son of a gardener – who may well have carved the Poynter bookcase; he supplied work to various firms and his exhibits had recently been praised at the London International Exhibition of 1862 for ‘a repose and vigorous touch which are not often united in so young an artist.’ A carved oak panel in the Renaissance Revival style made by Baylis in 1867 is also in the collection of the V&A (852-1868).

In 1867 Jones lent the Rossetti bookcase for display at the Paris Exposition Universelle. It was praised by John Hungerford Pollen in his 'Report on Fancy Furniture (Class 14)', in Reports on the Paris Universal Exhibition, 1867, Vol. II, p. 300:

‘A small press, about 3ft. high, in the Architectural Court, by Mr. Hayward (16), in oak, is worth notice, and may be mentioned here. Small medallions, in oil painting, are let in at the sides, and the spandrils [sic] of the door frames are decorated with carved foliage, wiry and dry, but elegantly composed. It is a great difficulty to get furniture of this kind fairly appreciated at its real worth. Our national architecture and special usages give us a greater taster for pieces of this special style in England than is to be found amongst Continental nations. Mr. Holland is producing a considerable quantity of this kind of furniture. It is but justice to state here that, for domestic uses, there is not Continental work throughout the Exhibition comparable to our own in this style. As ordinary room furniture, such specimens as we see are absolutely unworthy of notice.’

Later in life, Hayward restored the late fifteenth-century Guest House in Lingfield, Surrey, between 1896–7, living there until his death. In 1930 the house was inherited by his son, Arthur Baldwin Hayward, who bequeathed the house to Surrey County Council in 1954. A photograph of the Guest House, taken by Hayward c.1900, is in the collection of the V&A (E.5252-2000).

William Maskell, Handbook of the Jones Collection in the South Kensington Museum (London 1883), pp.34 and 43.

Hayward was an architect who designed three Gothic Revival bookcases to house the library, particularly the early editions of Shakespeare, of John Jones, the donor of the V&A's collection of French applied art. At least one of them was shown at the Paris International Exhibition of 1867. The naturalistic carving of ferns to the upper section of the bookcases is an example of John Ruskin's principle - rarely applied to furniture - that only ornament derived from natural sources could be truly beautiful. [pre March 2001] 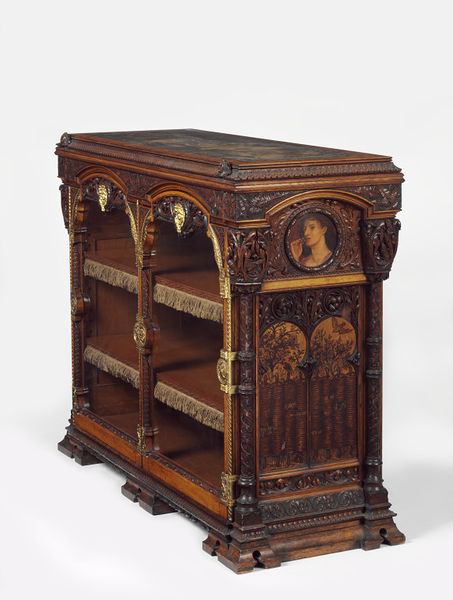