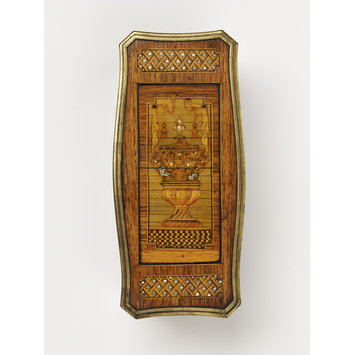 Initially designed as a stand for an embroidery frame, this object was made by the ébéniste George Jansen (master 1767) in about 1770-80. The marquetry scene shown on its base panel was used by Jansen, with minor variations, on a number of other objects.

In the 18th century, domestic pursuits such as spinning and embroidery were used to demonstrate a woman’s manual dexterity, as well as her refinement. Decorated stands such as this can be seen in use in contemporary paintings and prints. They formed part of a wider group of furniture and accessories used for domestic work, including work tables to house sewing materials and small lap-held spinning wheels.

This object was converted into a writing stand at some point in the early 19th century.

Writing-stand, composed of three parts: a base panel, with a raised compartment at each end. Each raised compartment contains a single drawer. The substrate is birch, veneered on the underside with yew and on the top with tulipwood. A gilt-brass frame runs around the base panel and each of the compartments.

The base panel is inlaid with a marquetry scene in which are represented, against an architectural background, two amorous couples. On the left a man and woman are conversing, on the right a seated woman extends her leg to a man who appears to be undoing her garter. The bodies of the figures are inlaid in ivory. The rest of the marquetry is in stained sycamore, stained holly and other woods.

One the tops of the raised compartments are marquetry panels of vases of flowers, with details picked out in ivory and mother-of pearl. The sides of the compartments are inlaid with architectural scenes of villages.

The underside of the base panel is stamped 'G JANSEN'.

birch with yew and tulipwood veneers, gilt-brass, marquetry in stained sycamore, holly and other woods, ivory and mother of pearl.

Stamped on the underside of the base panel: 'G JANSEN'

Made by the ébéniste George Jansen (master 1767) in around 1770-80, this object was originally designed as an embroidery-stand. When first built, the lids of the raised compartments would have been fitted as tambours. These would have folded back into the base of the compartments to allow for the uprights of an embroidery frame to be fitted on either side of the base panel. An example of this type of embroidery frame in use can be seen in the gouache Le Billet Doux, by Nicolas Lavreince (Waddesdon Manor, England).

The conversion into a writing-stand was done through the fitting of drawers with fixed tops, at some point in the early 19th-century. The stand is first recorded in March 1855, when it was sold at Christies in the Ralph Bernal sale (lot 4197). At this point it was described as a 'beautiful book and inkstand, of fine old marquetrie', meaning that the conversion must already have taken place.

The stand was given to the Museum in 1882 as part of a large bequest from the military tailor John Jones. It is not known when Mr Jones acquired it, but he also had in his collection a pair of tables, stamped by Jansen, with very similar marquetry tops (Museum numbers 1039&A-1882). 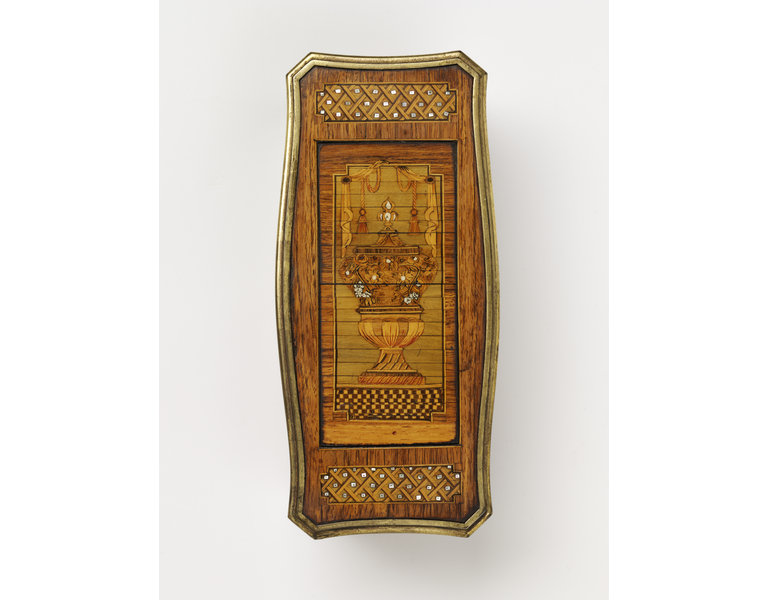