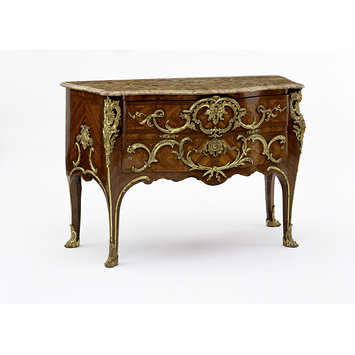 Charles Cressent came from a family of sculptors and is best known for the impressive sculptural mounts on his pieces. They provide a lively sense of movement on the relatively sobre surfaces of his furniture, which were often, as here, veneered with restrained geometric patterns in bois satiné (a wood related to mahogany), sometimes combined with amaranth (purplewood).

In eighteenth-century Paris it was strictly forbidden for members of the guild of cabinet-makers to make their own gilt-bronze mounts. They were supposed to buy them from the gild of caster and gilders. Cressent disregarded this ban, employing metal-workers within his own workshops to executre his own models. He was the subject of complaints from the casters and gilders on several occasions.

Cressent’s business premises included workshops for cabinet-making and metalwork on the ground floor, with three display rooms on the first floor, where Cressent sold pictures as well as furniture, in rooms hung in red damask or green satinade.

A two drawer commode on tall legs, with serpentine sides and front, veneered in bois satiné on a carcase of oak and pine, set with extensive gilt-bronze mounts, including the motifs of crossed palms and dragon heads on the front, and bats with outspread wings on the sides. The slab is of brèche de Tholonet marble. Although the drawers are constructed with a separate rail between that is visible on the front, the treatment of the gilt-bronze mounts, which create an overall framework on the front of the commode, ensure that the front is read as a single panel of decoration.

Veneered in bois satiné on a carcase of oak and pine; gilt-bronze mounts and a slab of brèche de Tholonet marble

C crowned
Stamped on the mounts in various places [exact locations to be checked]. This mark was a tax mark showing tax levied on copper between 1745 and 1749

The Handbook to the Jones Collection, 1883, (p.23) recorded that this stood on the first floor landing in John Jones house at 95 Piccadilly until his death in 1882 ('A small landing which measured scarcely eight feet by six and half left sufficient room for people to pass, although it contained (placed against the wall) the large Riesener [sic] commode (No. 1119))'.

A commode of the same model is in the collections of the National Trust at Blickling Hall, Norfolk (NT 35422). There are minor differences in the mounts between the two commodes but it has a similar, brecciated marble slab.

Charles Cressent (1685-1768) is best known for the quality of his mounts. He trained as a sculptor and was received into the Académie de St. Luc in 1714. In 1719 he married Claude Chavanne, widow of the ébéniste Jacques Poitou whose workshop he took over as well as his role as fournisseur to the Regent and his son Louis d'Orléans. Although he did not mark any of his pieces he did hold regular sales of stock and of his collection and the detailed catalogue entries give substantial information about the nature of his work.

He is known to have made a very large number of commodes. In the sales of stock which he organised in 1749, 1757 and 1765, commodes constitute the largest group in each sale. This concentration on such pieces is confirmed by the large number of surviving commodes that can reasonably be attributed to him. These fall into a number of groups, suggesting that Cressent took every opportunity to make the most of the forms of commode which he created and the rich mounts that he designed for them.

This model of commode can be identified with an entry in Cressent's sale of 1765. Number 80 in that sale was described as Une commode de même bois que ci-dessus, les ornamens legers, il y a un tiroir où il y a dessus deux têtes de dragon, le marbre en petites pieces d'agathe, tout ce qu'il y a de plus rare, de quatre pieds trois pouces de long, d'or moulu [a commode in the same wood as the one above, the mounts light, there is a drawer with two dragon heads, the slab in little pieces of agate, four feet three inches long, with gilt bronze]. The measurement of the width (equivalent to 137 cm) is very close to the width of this piece.

Cressent appears to have shown a marked preference for bois satiné in his marquetry, sometimes together with amaranth, but his choice of veneers was always subordinate to the design of his mounts and intended to provide a rich background only for the gilt bronze.

Commode of two long drawers, on tall legs, the carcase of oak and pine veneered in bois satiné, with mounts in gilt-bronze including palms, the heads of dragons and bats. French, attributed to Cressent, 1745-50

The exotic veneers of this commode are purely a background to the gilded metal mounts. Cressent trained as a sculptor and was known for lavishly mounted furniture. His prestigious clients regarded these pieces as works of art rather than functional objects. The ‘C-shape’ ornamentation is typically Rococo, and creates a unified panel of decoration on the front.

France (Paris)
Probably by Charles Cressent
Oak veneered with bloodwood and purpleheart; gilded copper alloy mounts; marble top
Bequeathed by John Jones
[09/12/2015]
COMMODE
FRENCH (Paris); about 1745-50
Veneered with bois satiné and purplewood; furnished with elaborate gilt bronze mounts, many of which bear the crowned "C" mark used between 1745 and 1749 to signify that the required duty on goods containing copper had been paid.
Top of Brèche d'Aleps marble

A number of commodes similar to this survive, one in the Wrightsman Collection resembling it very closely. They are usually attributed to Charles cressent who was the ébéniste to the Duc d'Orléans. Whatever the case, they were clearly the product of a leading cabinet-making establishment.

Veneered with bois satiné and purplewood; furnished with elaborate gilt-bronze mounts, many of which bear the crowned 'C' mark used between 1745 and 1749 to signify that the required duty on goods containing copper had been paid. Slab of brèche d’Alep marble.

A number of commodes similar to this survive, one in the Wrightsman Collection resembling it very closely. They are usually attributed to Charles Cressent, who was ébéniste to the Duke of Orléans. Whatever the case, they were clearly the products of a leading cabinet-making establishment.

One of a series of commodes of this model. See refs. (Pradère, 2003, pp. 154-5). Pradère suggests that the V&A commode can be identied with that sold in Cressent's sale of 1765, lot 80, because the dimensions are almost identical. This may be the same model as was sold in his 1749 sale, no. 16, but the description of that lot is too slight to allow of secure identification. The mounts on this commode are stamped in several places with the crowned C stamp which indicates that duty was paid on them in the period 1745-49. Pradère suggests that the series was made in the period 1745-50 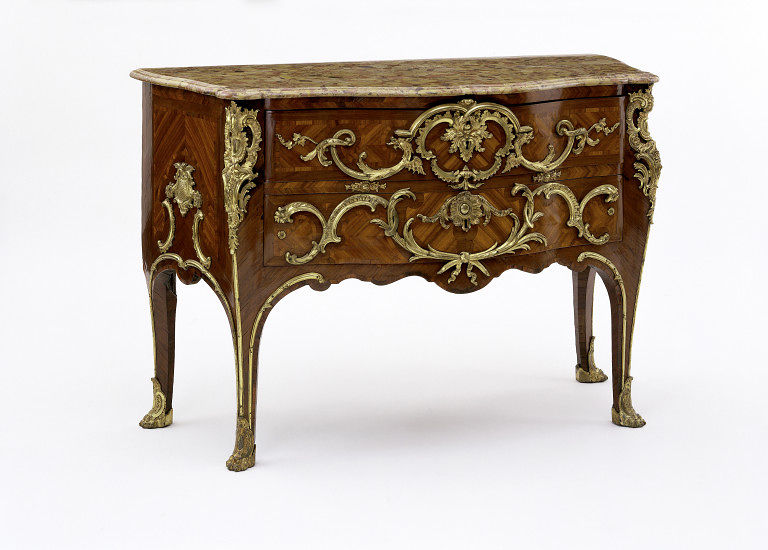