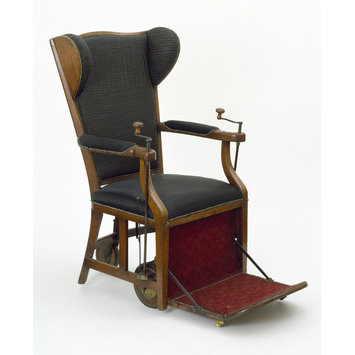 This chair is designed as a comfortable wing arm-chair on wheels. Winding handles on the arms propel the chair along. Invalid chairs had been used since the 17th century but chairs of this type were popularised by the inventor John Joseph Merlin (1735-1803), who designed a more up-to-date version. We do not know who made this example, but similar chairs were made by the cabinet-making firm Gillow & Co. of Lancaster, London, in about 1800 described as 'Gouty chairs', for people suffering from the medical condition gout, which caused great pain in the feet.

An oversized wing-back mechanical armchair, with mahogany frame, upholstered in satin-weave horsehair, with padded arms and ears, elevated on three large wheels and controlled by winding handles in the ends of the arms.
The four legs are of a tapering square section, with the back legs raked. All the stretchers are of rectangular section, with rounded tops. The side and back stretchers are joined to the seat rails by central uprights, of rectangular section. Between the front legs, there is a hinged mahogany foot-rest with a rounded, upward-tilted section that hinges off its front edge. The footrest is hangs from flat iron arms on either side and runs on two small brass castors on the underside. A strip of crimson Brussels carpet, decorated with a stylised floral motif of light red and black, set diagonally within a light red diamond shape, fills the space between the front legs and covers the upper side of the footrest.
The seat is upholstered in black horsehair. It has a straight front rail and a curved one at the back. The arm supports are square section, with rounded fronts, and are a continuation of the front legs, curving back in an ‘S’ form at the top to join the arms. The arms of the chair spring from about a third of the way up the back uprights and end in outward scrolls, which overhang the ‘S’ form arm supports.
The back uprights – square section with rounded backs – are a continuation of the back legs and splay outwards from the seat. They support thick, upholstered, ‘D’ shaped wing pads at the top, which have solid mahogany outer faces. The back is topped by a serpentine crest rail. This crest rail, a central cross bar and the lower rail of the back, all have rounded outer edges and are curved in plan to create a concave seat back. The front face of the seat back is upholstered in black horsehair but the back is covered with black painted canvas, the upper part of which, above the central cross bar, has been replaced.
The striped, satin-weave horsehair on the seat, back and wings, is the original upholstery of the chair. The plain-weave seat fabric is a later substitution.

Construction and mechanism:
The hinged footrest, when closed, shows as a solid mahogany panel between the front legs, with brass castors at the upper corners and large screws in the lower corners. A spring catch in the centre of the top edge can be pressed down to release this panel so that, when lowered, it forms a foot-rest supported by two metal arms. These metal arms are fitted to countersunk brass plates, halfway down the side edges of the foot-rest, and have large hooks on their upper end. The hooks fix over a metal rod, which is hidden behind the carpet, and are joined by a flat iron bar that also runs behind the carpet. To close the foot rest, these joined hooks have to be lifted free of the rod and pushed backwards. There are some remains of what was possibly a black painted or lacquered finish on the metal arms.
The front edge of the foot rest is fitted with a hinged ‘D’ shaped flap, which rests against a raked front edge, so that it is always tilted slightly upwards when open. The Brussels carpet is fixed to the foot-rest with brass nails through a woollen twill-weave tape, but also continues from the back edge of the footrest and runs up to the inside of the front rail, thus concealing the mechanism. There is a brass stop for the folded footrest, which is fixed to the back of the front rail, behind which is a small additional fillet that allows the carpet to be fixed further back to accommodate the folded, thicker, top section of the footrest.
The chair can be propelled forwards, backwards, or turned, by winding both or one of the two large brass clock-winding keys, fitted into the hand rests of the arms, which have turned Boxwood handles. Each key slots onto a metal rod that is fixed through the arm rests and, running in a groove down the outer edge of the arms supports, then through the side rails, and is fixed into a horizontal cogged wheel set on top of the side stretchers, near the front legs. The cogs of the horizontal wheel engage with a vertical cogged disc of brass, which is fixed to the outer face of the large front wheels, which are of mahogany with a brass rim. The wheels are on an axle, which is fixed with iron brackets to the lower edge of the side stretchers.
The wheels of the chair can be locked by pressing a gilt brass stud, which protrudes through the upholstery above the right seat rail near the front edge. This is fixed to a rod, which is attached to the end of a large hook, hinged from a plate attached to the inside edge of the front leg. When the gilt brass stud is pressed the hook is pressed down into the cogged plate on the wheel, to lock it. The hook is joined by a crossbar to a hook which controls the left wheel. A grooved flap set into the main vertical rod is held by a flange attached to the base of the seat rail, and this controls the amount that the brass stud can be depressed.
The large back wheel, which is of mahogany with a brass rim, is held by a pin between curving iron arms, projecting from a stout iron rod which slots into a metal plaque attached to a large wooden block, fixed in the centre, between the back seat rail and back stretcher.
The right front leg, at the juncture with the seat rail, has a brass plate with a large eye facing sideways. The left leg has a similar plate set with a small eye facing upwards. It is unclear what the original purpose of these may have been.
A hole is drilled through the top of each arm rest, just behind the joint with the uprights, but the purpose of this is uncertain.
There are open corner struts under the seat rails.

Naomi Yin Yin Szeto, The Extraordinary in the Ordinary. Chairs for Viewing the World Through Time. Hong Kong, 2014, p. 261. Catalogue of the exhibition held at the Hong Kong Heritage Museum, 2014, to which the chair was lent.

Similar chairs are recorded in the Gillows' records of about 1800. The upholstery of this example seems to be original, as does the carpet on the foot-rest. [pre October 2000] 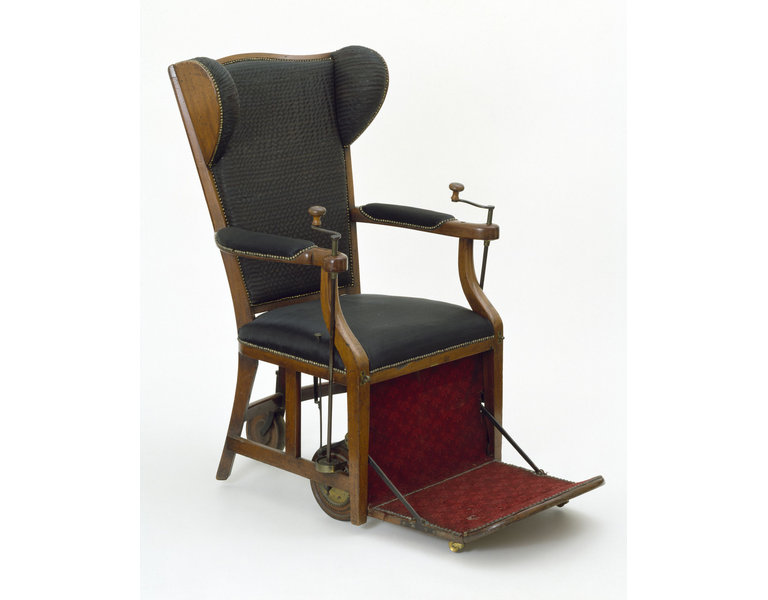