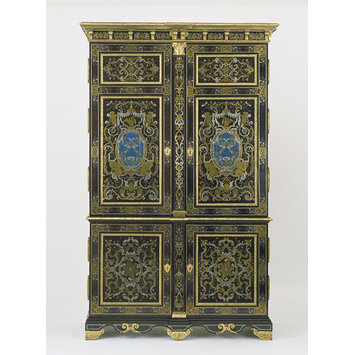 Large cupboards in which to keep clothes and other objects had been in use in France for some time before this type of furniture was adapted in the later 17th century to serve in rooms of state. An impressive appearance could be heightened by means of the materials used, as in this example, which is finely decorated with boulle marquetry - veneers (wafer-thin sheets that are glued and then cut out to a design) in ebony, turtleshell, brass, pewter and horn. The Paris workshop of André-Charles Boulle (1642-1732) became synonymous with the most important pieces of furniture of this kind, but this example, although of high quality, is probably the work of another cabinet-maker.

Armoire or cupboard, constructed in three parts: an upper and lower case (the lower with integral plinth) and a cornice. The case is oak with partitions and shelves of pine. The interior of the lower case is fitted with two stong boxes. The outside of the case is veneered in ebony, with twelve marquetry panels of brass and pewter. The inner surface of the doors is veneered with snakewood and padouk. The front and frame of the strong boxes is veneered with purplewood.

The armoire has four doors, two in each part of the case. An oval cartouche in the centre of each of the upper doors is decorated with two crossed 'L's in engraved brass and pewter, inlaid into clear horn with turquoise pigment behind. The cartouches may be a latter addition - it appears that the ovals may originally have been wholly of ebony.

The cornice is a later replacement, probably English.

Ebony veneer, with marquetry of engraved pewter and brass and panels of clear horn over blue pigment, on an oak carcase

The armoire was bequeathed to the V&A in 1882 as part of the John Jones collection. Jones made his fortune as a military tailor, kitting out the armies of the British Empire. He was also an avid collector of French furniture and porcelain, particularly of items made between about 1660 and 1800.

Jones had a large collection of boulle furniture, of which this was the largest piece. He kept the armoire in the dining room of his house at 95 Piccadilly, where it was flanked on both sides by two important boulle pedestals (1025 and 1025A-1882). When the armoire entered the Museum, it was said to have come to Jones from a collection on Carlton Terrace. It is likely that Jones bought it privately sometime before 1882.

The armoire's distinctive cipher, bearing crossed 'L's, suggests at first glance that it may have had a royal owner. The armoire does not, however, appear in royal inventories of the period. Given the fact that the cartouches appear to have been added at some later date, it is possible that the 'L's represent a 19th-century attempt to associate the armoire wth Louis XIV.

Such large cupboards had long been in use in France before the form was adapted in the late 17th-century as a piece of furniture designed primarily for its impressive appearance in state rooms. Marquetry composed of a combination of turtleshell, horn, brass and other metals is known as 'boulle' marquetry, after André-Charles Boulle (1642-1732), cabinet-maker to Louis XIV. Boulle was only one of several cabinet-makers to develop such marquetry in Paris; his status as royal cabinet-maker is likely to have ensured that it was his name that became synonymous with the technique. Boulle marquetry was termed 'première partie' when the brass decoration was inlaid into a dark ground (usually of turtleshell or ebony) and 'contre partie' when the ground was of metal and the decorative inlay of turtleshell or other contrasting material (A. Pradère, pp.67-109, see References).

A drawing attributed to Boulle's workshop, and possibly by his hand, shows two alternative designs for a cupboard on this scale. Though a number of armoires of this date are attributed to Boulle (some including panels of marquetry in wood for which he was also noted), the decoration of the panels on the V&A piece shows no similarities to boulle marquetry firmly associated with his workshop.

Boulle marquetry remained high in esteem throughout the 18th and 19th centuries and was one of the first enthusiasms of the early 19th-century collectors of antique French furniture.

Armoire or cupboard; oak and pine carcase veneered with ebony, with marquetry of ebony, snakewood, purplewood and padouk, turtleshell, brass, pewter and clear horn with turquoise pewter behind; gilt bronze mounts and locks.

This very grand armoire has extremely fine marquetry and would have been an important and expensive commission. Although we do not know who it was made for, it must have been produced in a leading workshop. The crossed 'L's on the fornt may have been added in the 19th century, perhaps to associate the armoire with Louis XIV.

Oak veneered with ebony, with marquetry of engraved pewter and brass; the oval panels of horn backed by a blue pigment. Gilt bronze mounts. Inside the lower section are two strong-boxes of oak.

It was been suggested that the monogram of coupled 'L's' on the doors may stand for Louis, the Grand Dauphin (d.1711), rather than for Louis XIV himself.

The cupboard has been attributed to André-Charles Boulle, but the marquetry is not very like that normally associated with him, and it seems likely that this impressive piece of furniture was made by one of the other leading Parisian cabinet-makers of the period. The entablature has apparently been altered at some point. In 1883, it was stated that John Jones acquired this cupboard 'many years ago from a house in Carlton Terrace, for a moderate sum'.

The maker is unknown, but it is clearly the product of a highly-skilled workshop working in the manner of André-Charles Boulle.

Attribution note: This armoire is exceptional for its monumental scale and fine decoration and especially for the quality of the design and workmanship of the panels of engraved marquetry. 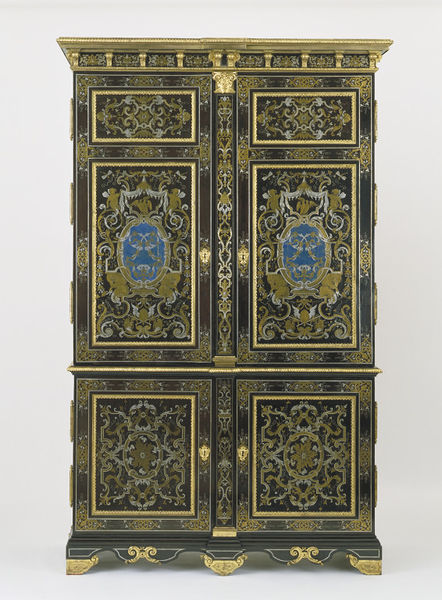