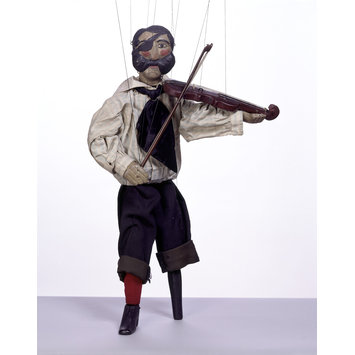 The figures were carved, painted, dressed and performed by members of the company. This is Tommy One-Leg, a one-eyed, one-legged sailor fiddler who was specially made for the popular comic music hall song 'How Cruel Were My Parients' (sic). It was sung by his wife, relating the fate of her husband who lost his eye and leg when he was press-ganged into the navy, and how he was reduced to busking in the streets with her.

Carved wooden marionette in the form of a character from a music hall act - a one-legged sailor playing the violin. Carved and painted hair and heavy mutton-chop whiskers, with a black painted leather eye patch over his right eye; the other eye and eyebrow painted with black pupils. Ivory painted face and hands, with more pink colouring on the cheekbones. He carries a violin in his left hand which rests on his left shoulder, and a violin bow in his right hand. He has a wooden leg from the left knee joint.

He wears a blue and white striped cotton shirt (possibly old), and black serge trousers, (probably recycled since there are old seams visible), the waistband is finished with a hand-sewn strip of brown cotton to thread the draw-string.

Three control bars, the third to work the bowing motion of the right hand. There are staples in the side of the neck for the run-through, again for the bowing movement.

This figure specifically represents the sailor violinist who featured in the popular Music Hall Song 'How Cruel were my Parents' (composer and date unknown; published in The Musical Bouquet). The cover of the music sheet is illustrated with an engraving of a woman begging, accompanied by this figure, fiddling. The lyrics, sung by the begging woman, explain the fiddler's appearance:

HOW CRUEL WERE MY PARENTS

My Love he plays the Fiddle, and wanders up and down,
And I sings at his Elbow, thro' all the Streets in Town,
We spends our days in harmony and wery [sic]seldom fights
Except when he's his Grog aboard, or I get queer at Nights
Singing too rol loo rol loo rol too rol loo rol loo.

Then Ladies take all the warning, by my true Love and me,
Tho' cruel fate should cross you remember constabncy,
Like me you'll be rewarded and have all your heart's delight
With fiddling in a Morning and a drop of Gin at Night
Singing too rol loo rol loo rol too rol loo rol loo.

A manuscript letter written by Harriet Clowes to Gerald Morice (Gerald Morice Collection, Theatre Museum), gives the shorter version that she said they performed, with patter:

Verse 1 (Mary):
Ladies and Gentlemen, I will sing to you a song
It's but a little ditty and I'll not detain you long
It's all about my husband as you can plainly see
He lost his right eye and his leg
When going out to sea

Patter:
Mary
You did lose your eye in the battle, didn't you Tommy?

Tommy
Agh, that I did, Mary. I have only got one left now

Mary
Never mind my darling I love you just the same

Verse 2 (Mary):
My love he plays the fiddle through every street in town
And I sing at his elbow as he wanders up and down
We spend our lives in harmony, we very seldom fight
Unless he takes some grogg on board
And I take gin at night

Patter
Tommy:
Ah, you like your drop of gin at night don't you Mary?

Carved wooden marionette from the Tiller troupe. Speciality act figure representing a character from a popular Music Hall song, the one-legged fiddler sailor known as Tommy One Leg. Made by the Tiller family circa 1870 to 1890.

The Saturday Book - 25
Edited by John Bradfield, published by Hutchinson, 1965
Article entitled 'A Troupe of Puppets'

It is impossible to identify the precise maker of this marionette since the company made, altered and used figures throughout its career. It is possible, however, to distinguish distinct types, and therefore groups, made by different makers, due to the type of carving. The carver of this object has not been distinguished however. 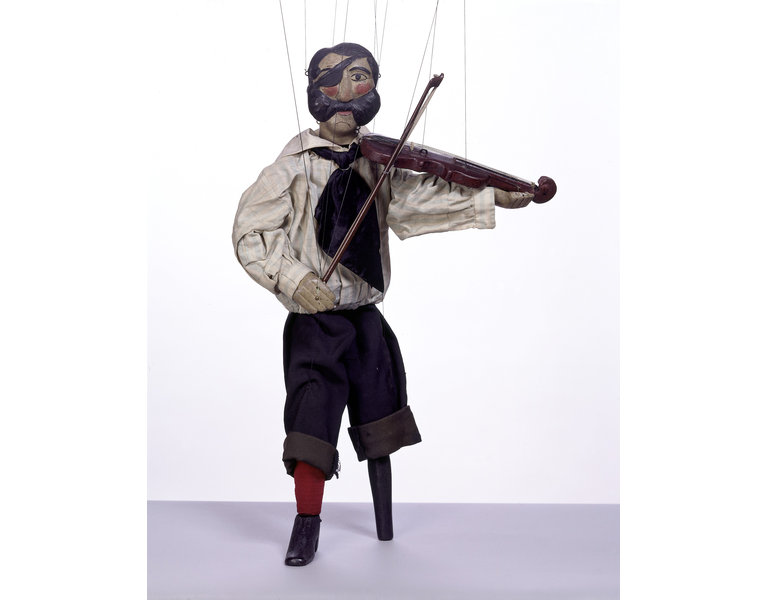