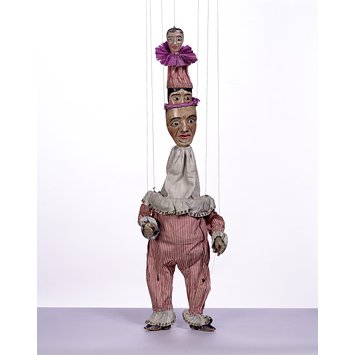 The figures were carved, painted, dressed and performed by members of the company. This is a trick figure dressed in its original costume. It has three heads which fit inside the neck and would have been raised for comic effect. It is based on the boastful character Scaramouche from the Italian knockabout comedy called 'Commedia dell'Arte', and may have appeared in a marionette music hall or pantomime.

Carved wooden marionette in the form of a three-headed Scaramouche, the two smaller heads inserted into the larger heads, and the largest head sunk into the body. The costume of the main body is of red and white striped cotton, with blue and white cotton frills, decorated with sequins at the shoulders, ankles and wrists. The large head wears a purple silk hat (rather rotten) and a stripey neck frill. The second head has a stripey cotton hat with a purple silk neck frill.

Two control bars, one pulling the string through the other, with the fixed strings on the other only attached to the sides of the large head.

Carved wooden marionette from the Tiller troupe. Speciality act figure representing a three-headed Scaramouch. Made by the Tiller family circa 1870 to 1890.

It is impossible to identify the precise maker of this marionette since the company made, altered and used figures throughout its career. It is possible to distinguish distinct types of carving in the human figures, but not in this case. It has deeply carved nostrils, no ears, and a nose a little more prominent than those of Maker D. 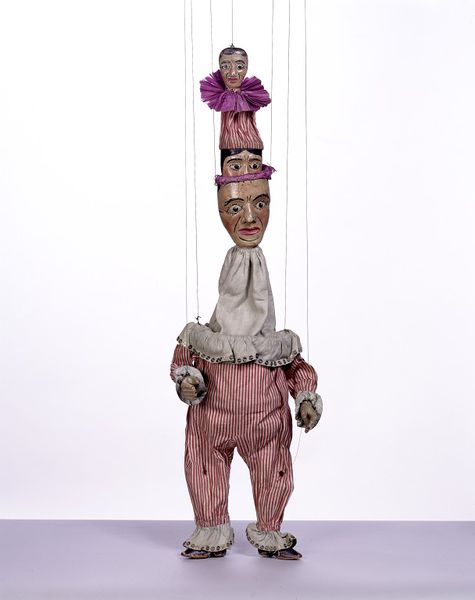