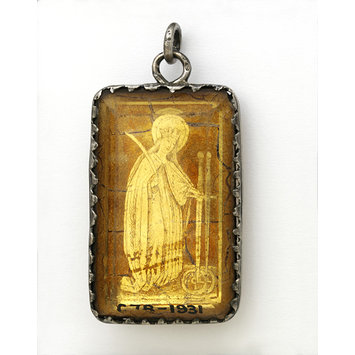 This pendant composed of two panels of rock crystal backed by gold leaf engraved with images of St. Catherine of Alexandria and St. Christopher was probably worn as jewellery although this technique was also used for reliquary pendants. The workmanship is probably Italian though the images derive from fifteenth century German print sources. Both saints were very popular in the late 15th century. The wearer of the pendant probably believed that the saints depicted would protect him or her. Wearing the pendant also demonstrated the owner's piety and served as a reminder of the holy lives of the saints on which the owner might model his or her own life.
The technique used here is known as 'verre églomisé', even though in this case rock crystal has been used instead of the more usual glass. The term is also used anachronistically as Glomy was an eighteenth-century picture dealer who specialised in frames painted and gilded behind glass. The technique of engraving gold leaf backed onto glass seems to have been invented in Alexandria in the first century B.C. The deeper the line is engraved with a fine pointed stylus, the darker the effect, while a shallower mark is used to render half-tones.
This object was one of a number of outstanding objects presented and bequeathed to the Museum by the American collector Alfred Williams Hearn and his French wife Ellen, nee Joubert.

Rectangular pendant consisting of two panels of rock crystal back-to-back, each panel with bevelled edge and backed with engraved gold leaf. The panels are held together with a silver mount or frame with wavy edge and small fixed hook at the top through which passes a single link. One engraved image is of St. Catherine who stands in long robe and cloak, turned slightly to her left. She wears a crown over her long loose hair behind which is a halo. In her right hand she holds a palm and in her left a large sword which she points downwards at a wheel lying flat on the ground. The other engraved image is of St. Christopher who wears a large cloak and long robe and has a beard and long hair. Holding a staff in the form of a branch with leaves at the top, he wades across a river bearing the Christ Child with halo on his shoulders.

Engraved gold leaf behind rock crystal, in a silver mount

This object was one of a number of outstanding objects presented and bequeathed to the Museum by the American collector Alfred Williams Hearn and his French wife Ellen, nee Joubert. The dealer Thomas Sutton of Eastbourne and 180 Piccadilly assisted Hearn in the formation of his collection which was built up largely in 1870s through judicious purchases at auction. Ellen added pieces herself before passing over the bequest to the Museum. The couple owned a house in France - the Villa St. Louis, Menton, which was subsequently bombed in the Second World War. It is possible that Alfred Williams Hearn who is said to have owned property in New York was related to the wealthy New York retailer George A. Hearn who was a Trustee and donor of paintings to the Metropolitan Museum of Art in the early years of the twentieth century. Alfred Williams Hearn's gift and bequest shows a varied collection strong in pewter but also other base metals, weapons, powder flasks and armour. He also bequeathed silver, medieval and later church and private devotional relics including manuscripts, tableware, cutlery, caskets, watches, snuff boxes and compasses, as well as tapestries and embroideries, ivories (some dating from 14th century), lacquer and inro, Limoges enamels, and ceramics including Italian maiolica, Meissen porcelain and English earthenware.

St. Catherine of Alexandria is regarded as the patron saint of learning. Though still regarded by the Roman Catholic Church as a saint, she was removed from the Catholic Church Calendar in 1969 owing to doubts about her historicity. Catherine is said to have converted to Christianity after she became queen and on being baptised by a desert hermit she had a vision in which she underwent a mystic marriage to Christ. The Roman emperor Maxentius was said to have been in Alexandria in the early 4th century and desiring her, sought to undermine her faith. After failing to do so, he sent fifty philosophers to her but they were converted. Catherine comforted them as they were burnt at the stake unbaptised. Maxentius bound Catherine to a device consisting of four wheels with iron spikes but a thunderbolt from heaven destroyed it. She was subsequently beheaded and her body was said to have been carried by angels to a monastery on Mount Sinai. Her crown symbolises her royalty, the palm is a sign of her martyrdom and the sword indicates her method of execution.
St. Christopher ("Christ-bearer") is patron saint of travellers and was said to sustain all who looked at his image. Like Catherine, he is still regarded as a saint by the Roman Catholic Church but was removed from the Catholic Church Calendar in 1969 owing to doubts about historicity. The Council of Trent (1545-63), had failed four centuries previously to abolish his cult. The popular version of his story derives from the Golden Legend which describes him as a Canaanite of huge stature who sought to serve only the most powerful person in the land. He left his first master who feared the Devil. Next he left the Devil's service because the Devil quaked at the Cross. So he served Christ and, guided by a hermit, devoted himself to carrying the poor and weak over the river. One night, he carried a small child who grew heavier at each step. The child revealed he was Christ so the saint carried the weight of the world on his shoulders. He told Christopher to plant his staff (a palm branch) in the ground and the next day it blossomed and bore dates. It is also said that two harlots who tried to seduce him to make him renounce his faith were instead converted. The King of Lycia finally tried to kill him. Forty archers failed to harm him yet one of the deflected arrows hit the king in the eye. Christopher was therefore beheaded instead.

This small rock crystal pendant containing two images of saints delicately engraved with a fine stylus on gold leaf was probably used as jewellery, reminding the wearer of the lives and deeds of the depicted saints, Catherine and Christopher and demonstrating piety. Both saints (though now demoted in rank being removed from the Catholic Church Calendar in 1969) were among the most popular in the late 15th century, largely owing to the the dissemination of the accounts of their lives through the newly-invented printing-press. Their stories were described in Latin in Jacopo da Voragine's 'Golden Legend' of about 1260-75, which during the second half of the 15th century was published in every major European language. It is likely that the wearer of the pendant believed that the images of the saints would afford him/her the protection of those saints. There is no concealed receptacle in the pendant and the silver mount seems original to the piece, so it does not appear to be a reliquary pendant or to have been converted into jewellery from two reliquary pendants. The images are confusing and one can be seen behind the other when held to the light, but worn against clothing, only one saint can be seen at a time.

Both these images are derived from engraved prints by one of the early German Masters such as Israhel van Meckenem (Lower Rhine, born ca. 1440/45, died 1503), Martin Schongauer (Colmar, born ca. 1450, died 1491) or the Master signing himself E.S. (also fifteenth century).

The technique used to create the two panels forming this pendant is now known as 'verre églomisé' ('verre' as the usual material is glass rather than the rock crystal used here). Originally a dealers' term for a style of frame created by an eighteenth-century picture dealer named Glomy, it has come to denote, for want of a better term, the whole class of such work, whether engraved or painted and gilt and however anachronistic its application. The term was first used in a published museum catalogue in 1852 (Musée de Cluny). The engraving of gold leaf backed onto glass seems to have been invented in Alexandria in the first century B.C. and some attractive late Roman examples exist. The technique was first mentioned by the tenth century chronicler Heraclius and by the early twelfth century Westphalian monk known by the pseudonym Theophilus, but both probably described the traditional methods rather than having first-hand experience. The best-known account is in the manuscript called 'Il libro dell'arte' by Cennino Cennini, which, being late 14th century, is more or less contemporary with this pendant. He describes it as a branch of devotional art used for the decoration of reliquaries which requires confident draughtsmanship as mistakes cannot be rectified. He says that thick gold leaf should be applied to a piece of fine glass with the use of albumen. He then suggests placing the glass on black cloth on a flat wooden board. Under good daylight, the artist should then draw lightly with a very fine needle fastened to a stick. The deeper the line, the darker the contrast, while a shallower mark is used to render half-tones. 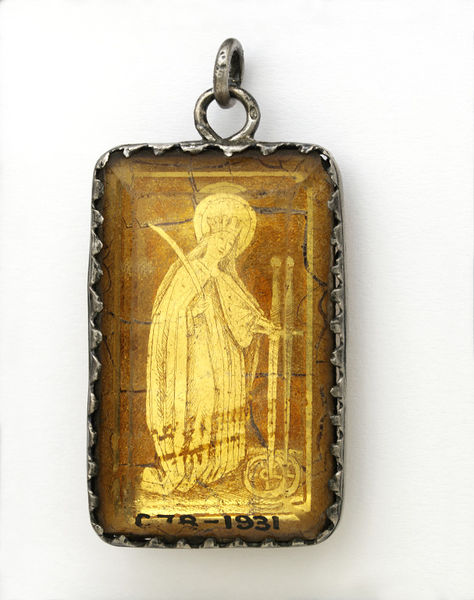