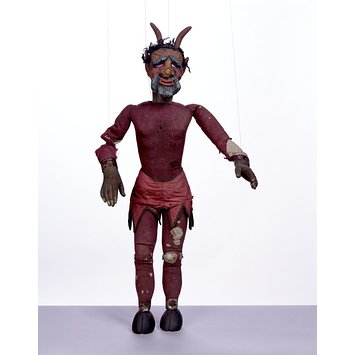 The figures were carved, painted, dressed and performed by members of the company. This is a devil with flashing purple eyes made from foil paper. He may have been used in the harlequinade of a pantomime, or any play requiring such a character. His face, beard, hands and fingernails are very strongly carved with more detail than is usual for this troupe. One horn and his hooves were missing and have been recently reconstructed, and the crepe fabric covering his body has been conserved.

Carved wooden marionette; a horned devil, originally with broken horns and no hooves, but these have been replaced by Plowden & Smith. The arms are padded from just above the wrists. His body is covered in red synthetic fabric, and he wears a silk-effect brief red skirt, with pointed hem, decorated with sequins and edged with black cotton. He has a strongly carved beard and features, and a contortionist-style body, with an extra bar between the pelvis and the shoulders. The hands are more carefully carved than is usual, with carved fingernails. He has forward arm movement and no lateral movement, and up-down forward elbow movement. His wrists have up and down movement, and his legs are attached by screw eyes at the top, slung on wires attached to the pelvis.

There were originally strings to the ears and the top of the head, and there is a staple in his head for a head string. There are eyelets to the knees, but the figure is unstrung.

Carved wooden marionette from the Tiller troupe. Red horned devil. Made by the Tiller family circa 1870 to 1890.

It is impossible to identify the precise maker of this marionette since the company made, altered and used figures throughout its career. It is possible, however, to distinguish distinct types in the collection as a whole, and therefore groups, made by different makers, due to the type of carving. The carver of this object has however not been distinguished. 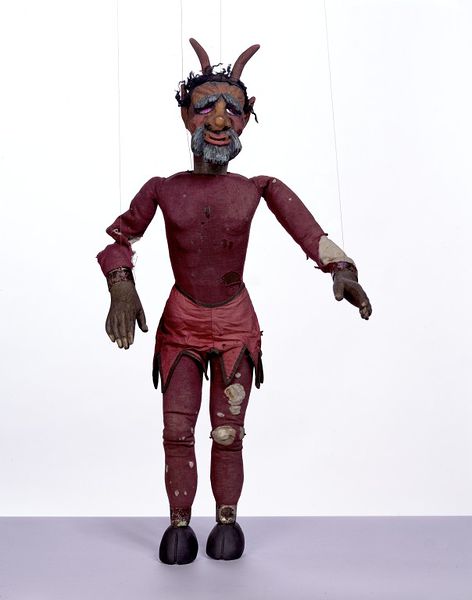