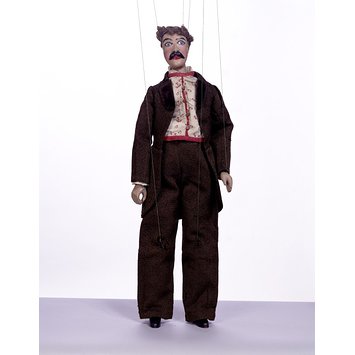 The figures were carved, painted, dressed and performed by members of the company. This is a middle-aged man with a carved moustache who would have been a stock character, used in any play requiring such a role. His right hand is carved closed to hold props, the left is open for gesture.

Carved wooden marionette; a young middle-aged man with a carved full moustache and blue glass eyes. He wears a modern two-piece tweed suit with a white cotton floral sprigged waistcoat edged with red braid and fastened with four metal buttons. He has a cotton collar and shirt, and wears old wool stockings. His right hand is closed to hold props; his left hand is open.

Wooden oval yoke, hollow for the shoulders. The pelvis is more solid, and the buttocks are shaped. The hand and the forearm are all in one piece; the upper arm is slightly stuffed.

Two control bars; bar 1 with two notches, with leg strings; bar 2 with four notches plus a vestigial staple/wire hook in centre (possibly for suspension, or the remnants of a head wire, but no trace of head rod centre back). Present stringing: head to ends of bar, also hands attached to same place. Back string (between shoulders to allow for dramatic head movements and speech) attached to one of the inner notches - this cannot correspond to the original stringing. Brass screw eye centre chest for run-through string to facilitate special gestures.

Carved wooden marionette from the Tiller troupe. Stock character representing a young middle-aged man. Made by the Tiller family circa 1870 to 1890.

It is impossible to identify the precise maker of this marionette since the company made, altered and used figures throughout its career. It is possible, however, to distinguish distinct types, and therefore groups, made by different makers, due to the type of carving. The carver of this object has been distinguished as Maker A because of its small head. 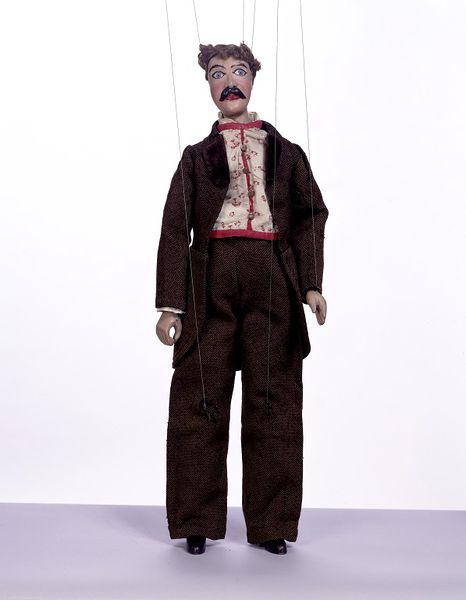