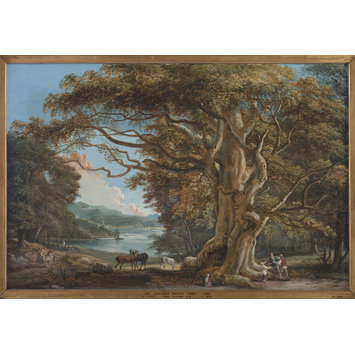 Paul Sandby (1730-1809) painted this watercolour in an unknown location. It is one of his most powerful and striking works, almost a portrait of a tree.

Sandy painted a similar landscape that is now in the Yale Center for British Art in New Haven, USA. This has been recognised as showing a view of Bridgnorth seen from the other side of the River Severn in Shropshire.

[Provisional label written by Ronald Parkinson for his travelling exhibition and accompanying book British Watercolours at the Victoria and Albert Museum, V&A Publications, 1998.]

One of Sandby's most powerful and striking works, this is in effect a 'portrait' of a magnificent tree. Its massive twisted trunk and its many branches dominate the composition and dwarf the figures in the foregound. The figures consist of two men, one holding a hat apparently filled with mushrooms, with a young girl, and a man and a woman in a donkey cart riding on the path towards the river.

There are several drawings of ancient trees by both Paul Sandby and his brother Thomas. Such trees, apart from their majestic appearance, were also natural objects of curiosity. For instance, a great beech tree in the grounds of Windsor Castle, where both artists worked, was supposed to have been so enormous that a woodman, his wife and four children, a sow and several pigs, lived in its trunk. When it was eventually cut down, the residue left on the wood by the burning of peat by the family provided, so the story goes, the Sandbys with a good supply of bistre pigment for their paintings and drawings.

The location has not been identified, but there is a similar landscape by Sandby in the Yale Center for British Art in New Haven which has been recognised as a view of Bridgnorth seen from the other side of the River [] 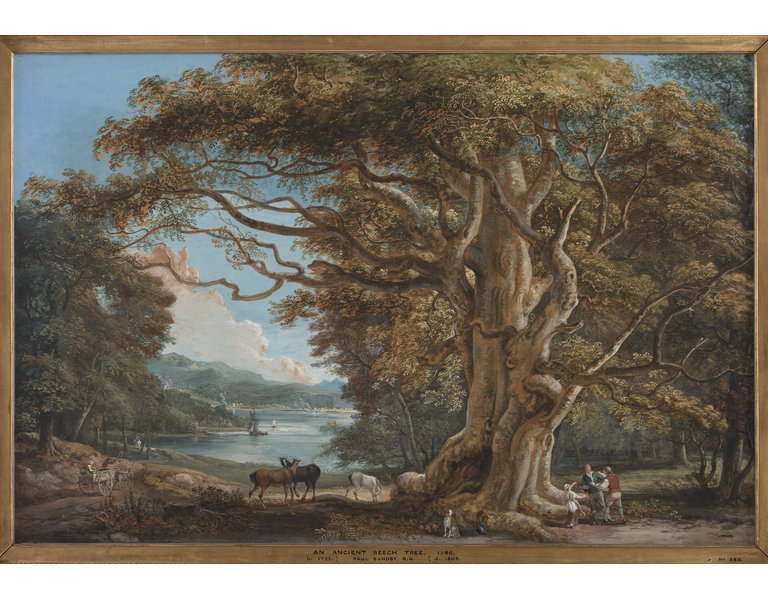