If you would like a larger file, or to use the image in other ways, contact our Licensing team.
+2
On display at V&A South Kensington
British Galleries, Room 52b
This object consists of 3 parts, some of which may be located elsewhere.

A Family of Three at Tea

Oil Painting
ca. 1727 (made)
Object Type
When painting 'conversation pieces' (relaxed portraits of family groups or gatherings of friends), artists were expected not only to show their sitters in fine clothes, but would also be obliged to include valuable possessions, indicating their wealth and social status.

Subjects Depicted
The painter shows a fashionable family sitting around a tea table, obviously proud of their up-to-date and valuable silver and porcelain, and also of their knowledge of the correct manner of taking tea. The tea equipage is a typical one of the first half of the 18th century. It includes a sugar dish, a tea canister, sugar tongs, a hot-water jug, a spoon boat with teaspoons, a slop bowl and a teapot with a lamp beneath it to keep the contents hot.

People
Richard Collins (active 1726-1732) was trained under the Swedish-born, London-based portrait painter Michael Dahl (born about 1659; died 1743), and worked as a portrait painter in Leicester and Lincolnshire. A painting by Collins of the same family drinking tea called The Tea Party is at Goldsmiths' Hall, London. The V&A version is attributed to Collins because it is so similar. 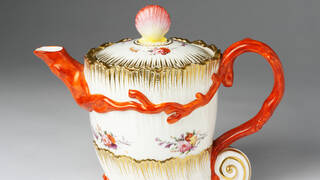 read Teapots through time Tea, the world's most consumed beverage after water, has a long and global history stretching across centuries and continents. Discover some of the finest examples of the most ubiquitous of all kitchen utensils: the teapot.
Object details