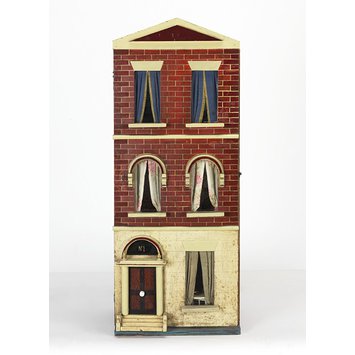 This type of house was widely commercially available through mail order catalogues as well as department stores and toy shops in the early tears of the 20th century.They made excellent presents for children and are much sought after by collectors in the early years of the 21st century.

This is a three storey wooden house with three rooms. This type of house was made by Lines Bros at the end of the 19th century, and was also made by small workshops and family concerns. It is known as a box back house because there are windows only in the front, the back and sides have no architectural details. These are confined to the front section which is also a hinged door. The lower portion of the front to the top of the first storey is painted a cream coloured stone pattern with the main part painted to resemble brick. A length of wood painted cream marks the dividing line between the first and second storey and also the second and third storey. The top of the house has a cream pointed arch with a red one set within it. The two windows on the third and first storeys are plain, with curtains that are unlikely to be original to the house. The two windows on the second storey are surmounted by semi-circular carved frames painted cream with details picked out in red. All five windows have plain sills. The door is stained brown and divided into four sections with a cream pillar on each side. A set of four steps also painted cream leads downward from the door. The door has a semi-circular carved wooden feature above it with a small cream and gold finial on each side. Inside, the first storey is papered with a small blue and white floral design. The second storey is papered with large roses framed in a pink border and the third storey is papered in a blue and white floral design set in a blue frame made of paper. Pages from scrapbooks are gliued to the upper ceilings, but not on the lower level. None of the papers are original to the house. The fireplaces have been removed at some point therefore some damage has taken place, but the house is otherwise a good example of the type. The house is on a green base.

Formed part of the doll and toy collection of Mrs Marcia Gore.

Dolls’ houses like this, with plain sides, a flat roof, and a brickwork front, are known as ‘box back’ houses. Just like the terraced houses they imitate, they were manufactured in huge numbers by mostly anonymous makers in the second half of the nineteenth century and into the twentieth.

There is no maker’s mark on this small, neat house, and we don’t know where it came from. The style of the windows – having a fanlight over the door and round arches on the first floor – imitate earlier, Georgian architecture. The architraves over the windows are moulded and painted, which suggests this wasn’t the cheapest model.

The inside of this dolls’ house has been redecorated with cut paper borders and scraps of wallpaper. Its busy, cosy appearance does suggest the interior of a late Victorian house.

Box back houses could be bought in the department stores and ‘fancy goods’ dealers of Victorian London, for example Gamages and Silber and Fleming. They were made in Britain, but also imported from Germany in large numbers. The toy companies G & J Lines and Swan made them in different sizes, and small local toyshops had their own popular models. The small size of many box back houses made them suitable for children’s bedrooms and nurseries, and they lend themselves to active play rather than pure display.

Marcia Gore
This house was donated to the Museum by Dr Leo Gore, in memory of his wife Marcia. Her collection of dolls’ houses focussed on small toy houses from around 1900. She was a member of doll clubs and societies, and enjoyed restoring old dolls’ houses.

Marcia Bundy met Leo Gore at Liverpool University, where he worked as a Technician in Dental Pathology. Marcia was a member of the Liverpool University Staff Social and Athletic Club, and Leo took this photograph of her on the badminton team, in about 1952. They married two years later.

Leo (1929 – 2002) remained working at the Dental School for most of his career, becoming Senior Chief Medical Laboratory Scientific Officer. He shared his wife’s interest in history, and was secretary of the Medical Sciences Historical Society. After he retired in November 1987, Marcia and Leo moved to Richmond in South West London.

Marcia died in 2000, and Leo donated a number of houses, dolls, and Marcia’s collection of books to the Museum of Childhood. He died two years later. 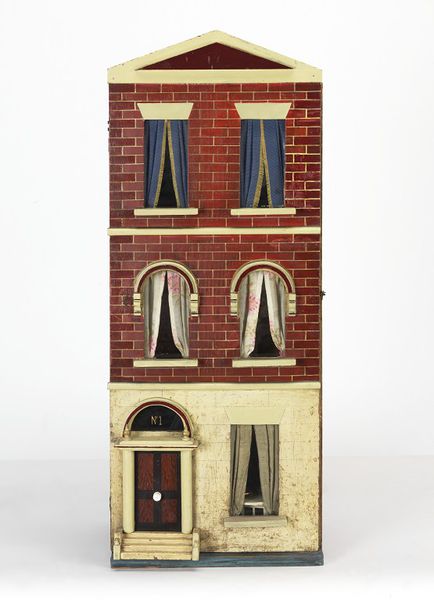