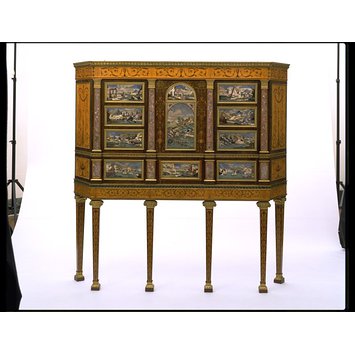 Object Type
Cabinets were usually fitted with many drawers and used to store small curiosities. However, the inside of the Kimbolton Cabinet is an empty space with a door at each side. It was used purely for show and to display a series of pietra dura plaques on the outside. Although the marquetry and inlay are so lavish, the gilt-bronze mounts by Matthew Boulton cost even more than the actual cabinet.

Materials & Techniques
The pietra dura plaques include a selection of different marbles and hardstones. The first stage in preparing this work would have been to make a full-size working drawing. Paper cut-outs, traced from the drawing, were then glued to selected slices of stone. The stone pieces were placed in a vice and cut with a bow-saw, then placed face down on a flat surface. A single piece of slate was stuck to the back of the design to form a support when it was turned over. Finally, the front of the plaque was rubbed smooth with fine abrasives. This type of work had been a speciality of Florence since the 16th century.

Place
Kimbolton Castle was first built in 1525. It was remodelled by Sir John Vanbrugh (1664-1726), the playwright and architect of Blenheim Palace, between 1707 and 1710. Robert Adam, in addition to this cabinet, designed the gatehouse and entrance screen for the castle in 1764-1765.

Cabinet of mahogany and oak with marquetry in satinwood and rosewood, designed to display eleven Florentine pietra dura panels made by Baccio Cappelli in 1709. It has ormolu mounts. It is so designed that the panels appear to suggest drawer and cupboard fronts, although the only real doors are the two in the angled ends.

London (made)
Florence (pietra dura plaques, made)
Birmingham (mounts, made)

Mahogany and oak, with marquetry in satinwood and rosewood, pietra dura plaques and ormolu (gilt-bronze) mounts

'Baccio Cappelli fecit anno 1709 Fiorenza'
Inscribed into the back of the central door-shaped panel. Baccio Cappelli was active in Florence, Italy, 1700-1730.

Designed by Robert Adam (born in Kirkcaldy, Fife, 1728, died in London, 1792). Commissioned by Elizabeth, Duchess of Manchester (1730-1832), for their London House. Cabinet made in London by the firm of John Mayhew and William Ince; mounts made in Birmingham by Matthew Boulton (born in Soho, Birmingham, 1728, died there in 1809). In a 1790 inventory of Kimbolton Castle, the cabinet was placed in the state bedroom, described as a 'cabinet of inlaid marbles, mounted in Ormolu, very fine'.

Designed by Robert Adam for Elizabeth, Duchess of Manchester in 1771 to display eleven panels signed Baccio Cappelli fecit anno 1709 Fiorenza. The cabinet was made by Ince and Mayhew and the ormolu by Matthew Boulton. The cabinet was designed solely as a vehicle for displaying the marble panels: it has little practical function, having no drawers, and access to the interior is only through doors in the angled ends. [pre October 2000]
British Galleries:
This cabinet has no practical function but was designed solely for the display of 'pietra dura' (Italian hard-stone) panels. Such architectural cabinets had been made since the 17th century. In its design Robert Adam used the most up-to-date Neo-classical ornament. This included unusual flat pilaster capitals of a type recorded by Adam on an ancient Roman temple he had visited in Split, Croatia. [27/03/2003] 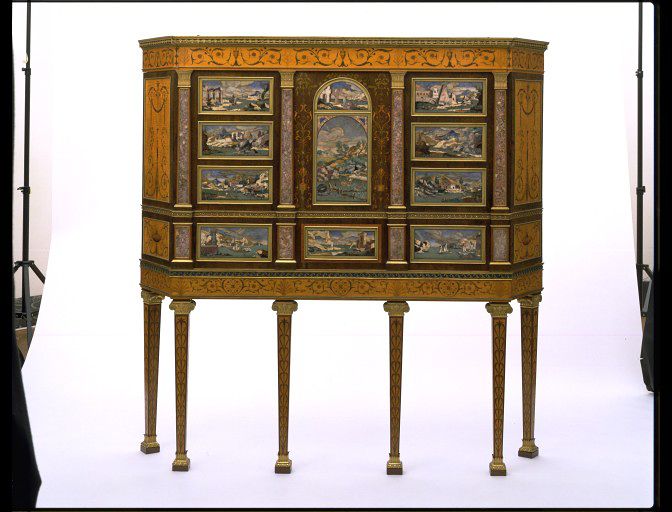