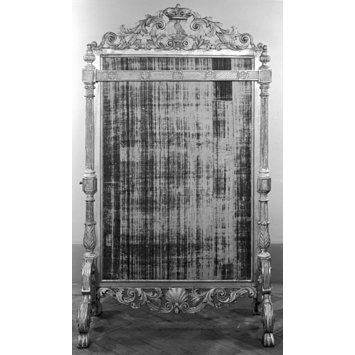 This firescreen is of very ambitious design. Such richly carved and gilded pieces were perhaps made to imitate the slightly earlier silver furniture which had been the preserve of royalty or nobles. The carving at the top of the screen includes the crest and coronet of Richard Temple(1675-1749), a notable military leader and politician, who was created Baron Cobham in 1714 and Viscount Cobham in 1718. This means that the screen must have been made between those two dates, because after that time he would have been entitled to show a viscount's coronet.

In 1715 Lord Cobham married Anne Halsey, the daughter of the owner of the successful Anchor Brewery which flourished in Southwark, under various owners from 1616 until 1981. She brought him the wealth that allowed him to undertake ambitious work to re-model the house and landscape at Stowe House, Buckinghamshire. Work to remodel Stowe, however, did not start until after 1718, so it is always possible that this screen, and a related table (W.30-1947, one of a pair) were made for a London house. Neither the screen nor the table can be identified for certain in the famous sale of the contents of Stowe in 1848 but the descriptions of lots in that sale are very brief.

A trestle firescreen with frame of carved, gessoed and water-gilded wood (probably softwood, probably pine), with a panel covered in crimson velvet. The two supports are turned and carved, above paired trestle supports at each end, carved as broken S-scrolls and supported on paw-like feet. The supports are each carved in two sections, with a central block, separating a lower section that emerges from a baluster-like base formed of upright leaves and an upper section in the form of a fluted column rising to a leafy capital, below a square block, to which is jointed an upper cross-rail carved with five floral rosettes, in reserves, against a ground of trellised panels. The uprights are capped by gadrooned urns. The plain, inner framing of the the panel is surmounted by a carved and pierced cresting of symmetrical scrolls interlaced with foliage, supporting a central motif of the crest of the Temple family, a martlet (heraldic bird) on a ducal coronet, below a baron's coronet. At the base of the panel is an apron of similar openwork carving of scrolls and foliage, but here centreing on a shell.

The crest on this firescreen indicates that it was made for Richard Temple (1675-1749), the British soldier and Whig politician, probably for Stowe House, Buckinghamshire. A number of firescreens were listed in the enormous catalogue of the sale of the contents of Stowe House in 1848, but none are clearly identifiable with this screen.

Richard Temple inherited the baronetcy of Cobham from his father in 1697. After an illustrious career in the army during Marlborough's campaigns and others, he was created Baron Cobham in 1714 and elevated to Viscount Cobham in 1718 (these changes of status allowing us to date the firescreen to these years). In September 1715 he married Anne Halsey, daughter and heiress of Edmund Halsey (d. 1729), who had made a very substantial fortune as owner of the Anchor Brewery in Southwark, a London institution which had been founded in 1616 and continued in varying ownership until 1981.

This firescreen is attributed to the workshop of James Moore Senior (c. 1670-1726). Moore originally worked with John Gumley, the manufacturer of mirrors but from about 1712 he was in business on his own, in Nottingham Court, Short's Gardens, St-Giles-in-the-Fields, London. He worked for royal household, for the Dukes of Marlborough and Montagu and for a number of other noble clients, specialising in this form of carved and gilded work, which used a thick gesso layer, with much of the finest details worked in the gesso. The scrolls and shells are similar to designs published by Daniel Marot (1661-1752).

The screen cannot be identified in the catalogue of the sale of the contents of Stowe House in 1848 but it is always possible that this screen was made for another house (perhaps in London) or was moved from the house before the sale separately.

A table (W.30-1947) is close in the manner of its armorial carving to the carving on this screen and is also attributed to James Moore. That table is also traditionally associated with Stowe but, as with the screen, no connection is fully documented and it may also, like the screen, come from another house of Lord Cobham's.

Purchased from Messrs Philips of Hitchin Ltd, The Manor House, Hitchin, for £165 (Registered Files 1674/49). They reported that they had bought it at a sale in Chippenham, Wilts., early in 1949, but no further intermediate history is known.

A trestle firescreen with carved and water-gilded frame, probably pine, the panel covered in crimson velvet. Probably originally from Stowe House, Buckinghamshire, and carved with the crest (a martlet or bird on a ducal coronet) below a baron's coronet, for Richard Temple, Lord Cobham.

Bearing the crest of Temple (on a ducal coronet a martlet or) below a Baron's coronet for Richard Temple, Baron Cobham (1714) and Viscount Cobham (1718) of Stowe House, Buckinghamshire. 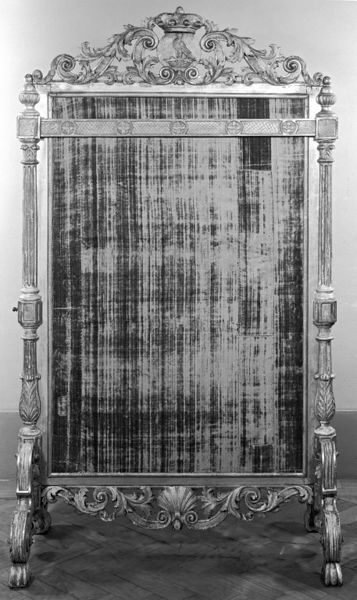