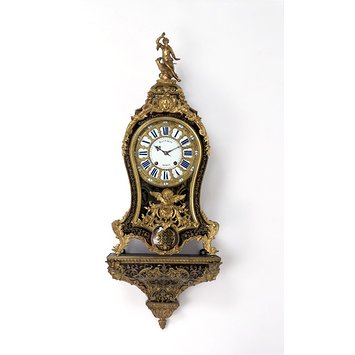 This was the standard form for a fashionable wall clock in France from about 1735 to 1760. The sweeping lines of the case follow the fashionable curves of the Rococo style. However, the decoration of clocks was often rather old-fashioned in comparison with that of other furnishings. In this example the tight, symmetrical scrolling pattern of the boulle marquetry – which combined brass and dark tortoiseshell and was named after André-Charles Boulle, cabinetmaker to Louis XIV – is closer to designs of the period before 1720 than to those of 1740. The dial is more up-to-date in style, with 13 separate plaques of enamel set into a gilt-brass framework.

A clock on a separate bracket, of waisted, serpentine form. The clock case is probably of oak and the bracket is of pine. Both clock and bracket are veneered with boulle marquetry of turtleshell inlaid with engraved brass, with gilt-brass mounts, the dial set with a centre and 12 hour plaques of white enamel with black Roman numerals. The cresting of the clock is a separate section and is surmounted by a sculptural group of young woman carried aloft on an eagle.

The carcase probably of oak, the bracket of pine, both veneered with boulle marquetry of turtleshell inlaid with engraved brass; with gilt-brass mounts; movement of brass and steel; dial plate of tin? enamelled in white, blue and black; glass; hands of blued steel; iron hooks to the bracket

BASTIEN À PARIS
In black enamel on the dial

Bastien Aparis
Engraved on outside of backplate of movement

Ladoüé Janvier 1740
Engraved on both mainsprings. Mainsprings were often signed in such a way by their specialist makers.

Carcase probably of oak, the bracket of pine, both veneered in boulle marquetry of turtleshell and brass, with gilt-brass mounts; the dial plate enamelled in white, blue and black

The boulle technique of marquetry using tortoiseshell and brass with other materials remained fashionable for clocks, even when it use on contemporary furniture had fallen out of fashion.

The boulle technique of marquetry, using tortoiseshell and brass, with other materials, had been highly fashionable in Paris in the first decade of the 18th century. By 1730 it was becoming old-fashioned, though it never entirely fell out of fashion. Its complex technique and luxurious materials continued to be valued by some clients, and boulle marquetry panels were often re-used or adapted for new furniture, as is clear on the adjacent table (1021-1882). Clockmakers in France, as in England, tended to be conservative in the styles they chose for their clock cases and so boulle marquetry continued to be used for clocks even after it had fallen out of favour for furniture. 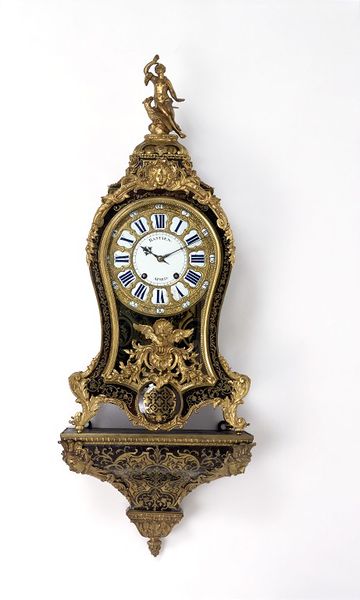