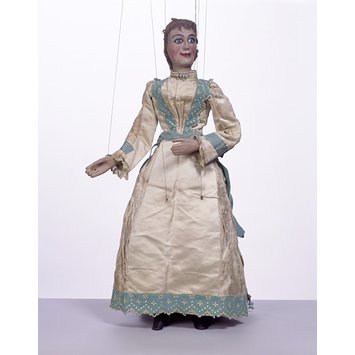 The figures were carved, painted, dressed and performed by members of the company. This is a young woman who would have been a stock character. Both hands are carved open for gesture so she would not have been able to hold props.

Carved wooden marionette; a young woman with a pink-toned painted face, red mouth, and glass eyes with heavily outlined lids and eyebrows. She has a real hair, light brown, wig and wears an ivory silk dress (rotted and fraying in places), lined with gauze and edged with turquoise blue wool trimming with silk embroidery. She wears a cotton underskirt. There is turquoise petersham at her wrists and as a sash, and a small brooch in the form of a flower spray at her throat. Both hands are open.

Lightly-stuffed torso, and therefore a flexible waist. Also shows the technique of attaching slightly stuffed tubes of cloth to the top of the legs, sewn across and tacked to the body.
One control bar; the other probably lost, since the legs are equipped with eyelets, and the costume has reinforced eyelet holes for the strings.

Carved wooden marionette from the Tiller troupe. Stock character representing a young woman lead character, wearing a cream silk dress with turquoise embroidery and trimming. Made by the Tiller family circa 1870 to 1890.

It is impossible to identify the precise maker of this marionette since the company made, altered and used figures throughout its career. It is possible, however, to distinguish distinct types, and therefore groups, made by different makers, due to the type of carving. The carver of this object has been distinguished as Maker ???????????? because of ????. 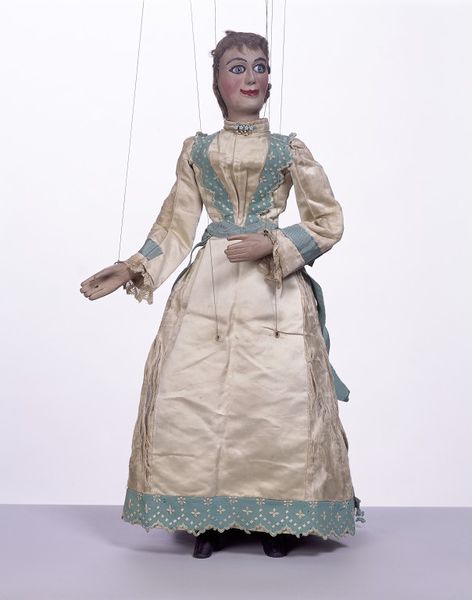