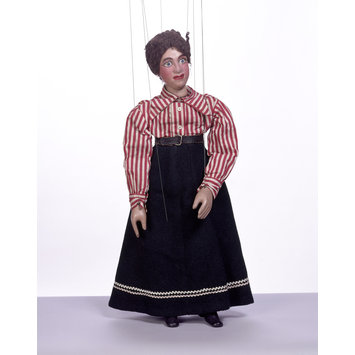 The figures were carved, painted, dressed and performed by members of the company. This young woman would have been a stock character. Both her hands are carved open in gesture, so she would not have held props.

Carved wooden marionette; a young woman with a pink painted face, red mouth, and eyes with painted blue pupils. Her wig is attached over carved hair, and her carved hands are open. She wears a red and white striped cotton Edwardian-style blouse with mock buttons on the front, and working buttons on the cuffs and back. The skirt is of a heavy wool fabric decorated with two rows of white rick-rack braid above the hem line, and she has a leather strap belt. She wears brown knitted tockings, white cotton frilled under-pantaloons, and a thin black wool underskirt.

There are heavy staples at the ankle joints.

Two control bars - a two-notch leg bar, and a seven-notch bar, possibly used as a single bar control on another figure. Two strings are attached to eyelets on the shoulders (probably not original). Run-through hand strings with eyelets, not using notches.

Carved wooden marionette from the Tiller troupe. Stock character representing a young woman. Made by the Tiller family circa 1870 to 1890, but possibly re-dressed later.

It is impossible to identify the precise maker of this marionette since the company made, altered and used figures throughout its career. It is possible, however, to distinguish distinct types, and therefore groups, made by different makers, due to the type of carving. The carver of this object hasnot been distinguished. 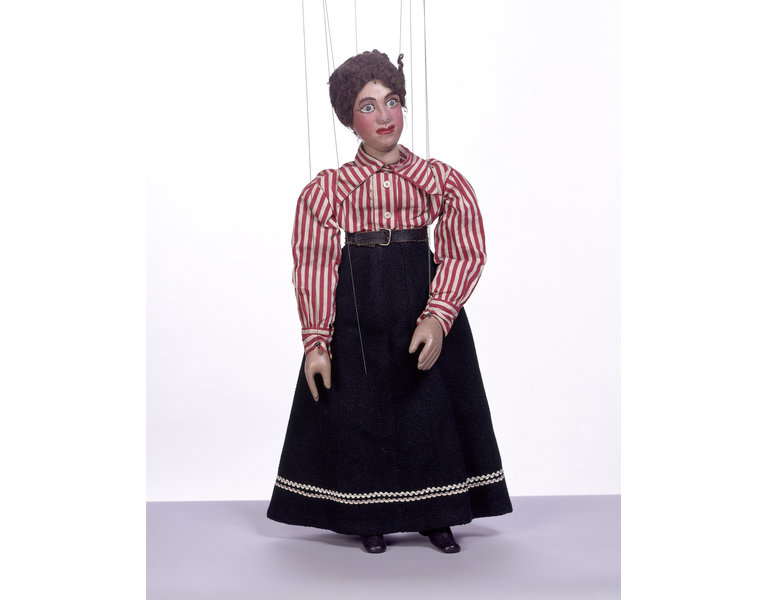