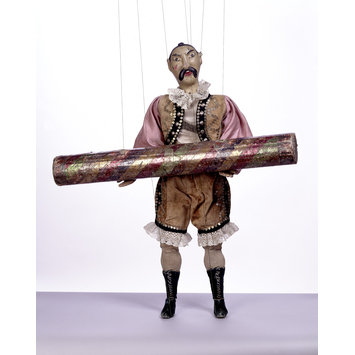 The figures were carved, painted, dressed and performed by members of the company. This is a pole balancer, or 'polander'. His existence in marionette troupes owes its origin to the fame of 'The Great Polander', a performer who had great success with his pole-balancing act at Sadler's Wells Theatre, in London, in the late 18th century. He is wearing his original costume, and is complicated to operate since his pole can be transferred to his hands and his feet.

Carved wooden marionette in the form of a Variety Act pole juggler, probably 'The Great Polander'. Ivory, black and red painted face and eyes with black dots for pupils, originally carved as a Chinese head but with the pigtail painted out and full black hair painted in. With a pole covered in multi-coloured metallic paper, with five holes through it; also eyelet holes. No stuffing in the centre body or upper arms. Legs attached by cloth tubes, and wooden ankle joints, reinforced by a staple, with a pin through.

This marionette was used as Carlos della Cucina di Cordoba, the Spanish Tranka!
in the Variety performance preceding the production of The Floating Beacon at the Theatre Museum in April 2004.

ca.1780-1805 'The Famous Polander' appeared at Sadler's Wells Theatre, designated 'The Famous Balance Master', and in 1803 a bill for The New Circus, Hull, reveals that 'the astonishing Polander' was on the bill, whether or not it was the same as the one who appeared at Sadler's Wells. In any case, this shows that pole balancing was a popular Circus and Variety act which was being represented by this marionette figure.

Carved wooden marionette from the Tiller troupe. Speciality act figure representing a pole-balancer. Made by the Tiller family circa 1870 to 1890.

It is impossible to identify the precise maker of this marionette since the company made, altered and used figures throughout its career. It is possible, however, to distinguish distinct types, and therefore groups, made by different makers, due to the type of carving. The carver of this object has been distinguished as Maker D. 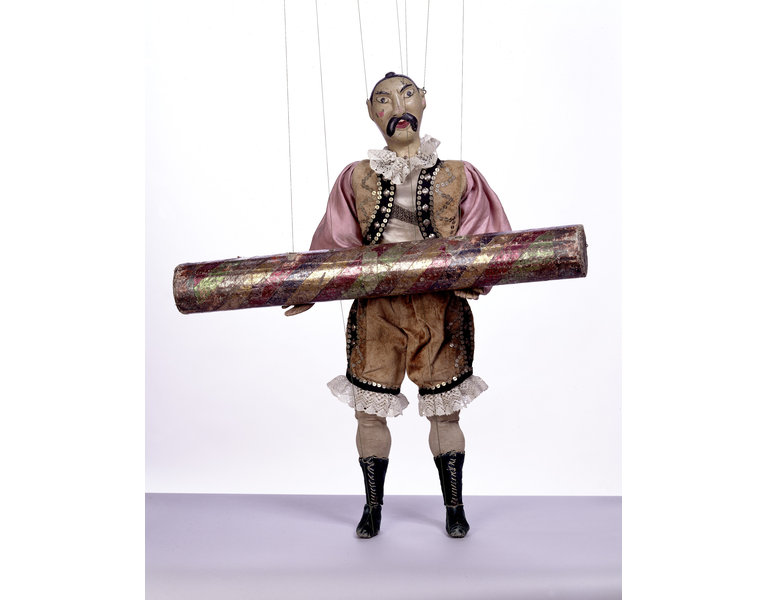