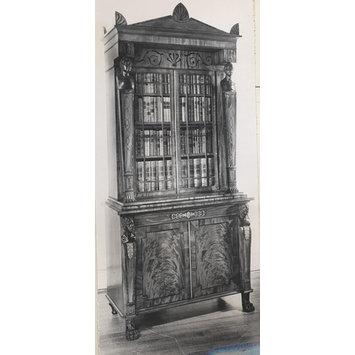 The bookcase has an upper section with glazed doors and a lower section with solid doors. The upper section is formed of a pediment, entablature supported by a pair of terms, and the cupboard with glazed doors, both of which stand on a stepped plinth. There are acroteria, inlaid with anthemion motifs, in the centre and at the corners of the pediment. Below the pediment the entablature, inlaid with scrolling foliate motifs either side of an anthemion motif, is supported by a pair of terms, with bronzed busts of Charles James Fox on the left and William Pitt the Younger on the right, and ebonised fluted feet. Between the terms are the pair of glazed doors, which have glazing bars of mahogany edged with a darker wood, and enclose an interior with three adjustable shelves. Both doors have a brass keyhole and there is a central brass strip running top to bottom of the right hand door.

In the lower section, above the pair of solid doors is a frieze, with dark stringing and an omolu mount in the form of a central foliate mount flanked by anthemions. The doors each have a brass key hole and there is a brass strip fitted to the left hand edge of the right hand door.On either side of the doors stands a term with a bronzed plaster bust, that of Admiral Lord Nelson on the left and Admiral Lord Duncan on the right. Below each bust is a ormolu foliate mount.

The sides of the bookcase are plain, inlaid with dark stringing, and it has front feet in the form of hairy paws and turned feet at the back.

The design of the bookcase is based on a plate in Thomas Sheraton's Cabinet-Maker, Upholsterer, and General Artist's Encyclopaedia, dated 12 June 1806. The four bronzed plaster busts represent the Whig politician, Charles James Fox (1749-1806), the Tory prime minister, William Pitt the Younger (1756-1806), and two naval heroes, Admiral Lord Nelson (1758-1805) and Admiral Lord Duncan (1731-1804). Giovanni Domenico Giannelli, whose name with the date July 29 1808 is inscribed on the busts of Fox and Pitt, was a member of a family firm of sculptors and modellers, with premises at Cock Hill, Snow Lane, London. The Giannelli firm were well known for their plaster casts, including busts, and figures for lamps. One of their commissions was for full-length figures for the hall at Carlton House, the London home of the Prince of Wales.

There are various possibilities for the sources used by Giannelli for his busts. Both politicians were commemorated in busts, Fox in two versions of 1791 and c. 1802, and Pitt, from his death mask of 1806, by the sculptor, Joseph Nollekens, who produced numerous marble versions and plaster casts of these busts. Many likenesses were taken of Admiral Lord Nelson, including busts by L. Gahagan (1804) and Peter Turnerelli (plaster cast of 1805), which might have inspired Giannelli's version. The bust of Admiral Lord Duncan, victor of the battle of Campderdown (1797), may be based on the portraits of him by John Hoppner (1797) and Henry Raeburn (1798).

The Giannelli firm would have supplied the bronzed busts of famous politicians and popular naval heroes for the maker of the bookcase, who has not yet been identified.The bookcase was presumably made shortly after July 1808, the date inscribed on the busts of Fox and Pitt.

The bookcase is thought to have been made for Clifton Castle, near Ripon, Yorkshire, which was built 1802-10 by John Foss for Timothy Hutton, a local landowner. The interiors must have been sufficiently furnished for a dance which was held in June 1810. Gillows of Lancaster supplied furniture for the drawing room and dining room between 1811 and 1818, but not the bookcase. Ownership of Clifton Castle passed through two marriages to the Herrick-Curzon-Howe family who sold the estate in 1963.

In Britain, a thriving trade in the marketing of three-dimensional images made of plaster, particularly sculptures, busts and brackets, developed from the late 1730s. John Cheere (1709-87), who took over an existing business producing lead garden sculpture in about 1738, may have been the first craftsman to produce plaster casts with either a bronzed or marbled and gilded finish. The trade in these plaster models, which could be reproduced cheaply and easily, rapidly expanded with the establishment of plaster shops, run by modellers, who provided a wide range of casts. These were produced for the use of cabinet-makers, clock-makers, goldsmiths, jewellers, pottery and porcelain manufacturers, and other trades. Modellers may have used a range of sources for their designs, including sketches, engravings, architectural specifications, or original sculptures.

The technical ease with which original sculptures, busts and other models could be copied in plaster, combined with the competition between the plaster shops, encouraged the spread of plagiarism and resulted in protests from a group of sculptors. An Act, sometimes called the Garrard Act after the sculptor George Garrard, was passed in June 1798, giving those responsible for a original design copyright protection for fourteen years over their work, provided each piece was signed and dated. The signature and date inscribed on the busts of Charles James Fox and William Pitt the Younger on this bookcase are an example of this copyright protection.

The development of plaster shops, descriptions of some individual firms and their products,and the influence of the Garrard Act, are explored in an article by Timothy Clifford, The Plaster Shops of the Rococo and Neo-Classical Era in Britain, Journal of the History of Collections, Vol. 4, No. 1, 1992, pp. 39-65.

Closely related to a design in Thomas Sheraton's The Cabinet-Maker, Upholsterer and General Artist's Encyclopaedia, 1806. The busts are of Charles James Fox, William Pitt, Admiral Nelson and Admiral Duncan. The bust of Fox is inscribed 'publed (sic) on the Act dir. July 29th 1808, J.D. Gianelli, No.33 Cock Lane, and statues, and the Act referred to of 1789, copyrighted'. [pre October 2000]

The bookcase was presumably made shortly after July 1808, the date inscribed on the busts.