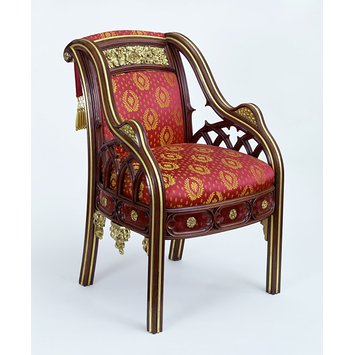 Object Type
The red and gold upholstery of this chair is based on the original scheme, using fragments of material found on the chair and John Buckler's illustration of the drawing room published in his Views of Eaton Hall (1826). The unusual method of hanging the fabric from the back of the chair was intended to emphasise the Gothic design and to make the backs look more interesting.

Ownership & Use
Lord Grosvenor also commissioned a simplified version of this chair for the dining room at Eaton Hall. Another set of dining chairs was ordered by Lord Berwick from the furniture makers Gillow & Co for his house, Attingham Park, Shropshire. That set, covered in blue leather and carved with vine leaves in the back, are still in the dining room at Attingham.

Gilded mahogany; modern upholstery based on the original

One of a set of gothic chairs commissioned by the 2nd Earl Grosvenor for the Drawing Room at Eaton Hall, Cheshire. Probably designed by Augustus Charles Pugin (born in Paris, 1769, died in London, 1832); made by Gillow & Co. in Lancaster or London.

mahogany, carved and gilded, with modern silk top cover and fringe; possibly designed by A.C. Pugin and made by Gillow & Co. for the Drawing Room, Eaton Hall, Cheshire, British 1822-3 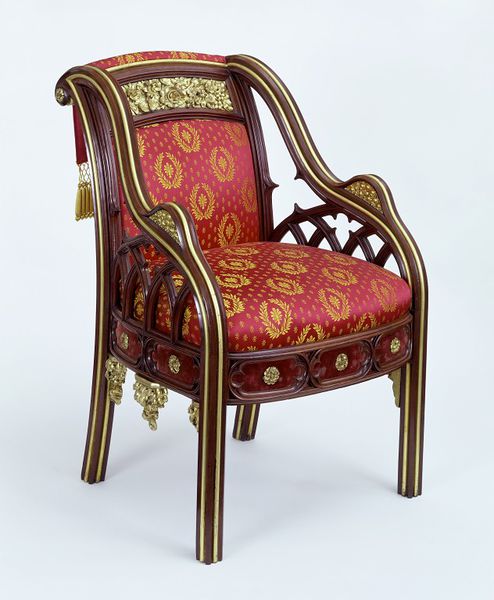