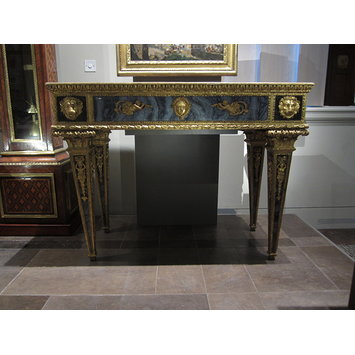 This table is one of a pair: the other is at Temple Newsam House, Leeds. They form part of a small group of known furniture made in Sicily in the last decades of the 18th century, characterised by the use of panels of reverse-painted glass (or painted paper glued to the back of glass) to imitate marble or hardstones such as onyx and agate. In this case, like several other surviving examples, the glass panels are set within a carved and gilded wooden frame, and are also decorated with carved and gilded ornaments glued to the front of the panels.

In both its rectilinear form and its decoration, the table shows the impact of Neoclassicism on furniture design in southern Italy. This style represented a reaction against the asymmetrical curves and rocaille motifs of rococo design, and a return to the order and formality of the classical language of architecture. It was inspired in particular by the discoveries made at the excavations of archaeological sites including Herculaneum (from 1738) and Pompeii (from 1738).

The painted glass decoration of tables such as this was intended to evoke the ancient and modern tradition of using polychrome marbles and hardstones in interior decoration, widespread in Sicily. In addition, certain decorative motifs, such as the corinthian capitals formed of acanthus leaves and the basket-bearing figures known as canephorae show the direct inspiration of classical ornament.

On the top of the table rests a slab of marble, composed of a central slab of Rosso Levanto, bordered by a frame of lighter red marbles, possibly Breccia Pernice, bedded onto slate.

The table frame is of carved and gilded wood. The front and sides of the apron are each divided into three compartments, with bead-and-reel frames: at each corner are two compartments, each containing a gilt head of a lion, holding a ring in its mouth on a background of glass and dark grey paper, imitating marble. The front central compartment contains the gilt head of a goddess with plaits of hair tied under her chin flanked by two horn-blowing amorini, the lower half of whose bodies are each made up of a short acanthus skirt from which a tendril sprouts. They are set on a background also of glass and paper, which imitates veined light and darker blue-grey marbles. The central compartments at the sides are each decorated with a husk, partly covering a pine cone. The top of the apron is composed of a frieze of egg and husk moulding, and the bottom of the apron of a frieze of laurel. The table legs have Corinthian capitals, with a guilloche frieze immediately below. The shafts of each leg are decorated on each side (bar the back of the back legs which are painted in imitation pine) with a gilt female herm or kanephoros ('basket bearer') figure, with entwined snake tails in place of legs terminating in a fig leaf, placed against an imitation marble background similar to those in the central compartments of the apron. They are enclosed in a bead-and reel-frame. The feet are in the form of tapering sabots.

Construction. The legs are glued to broad blocks, around which the planks forming the aprons and the back are fitted with the help of narrower blocks, placed in between. The back right leg has a plank fitted between the top of the capital and the bottom of the apron. The frame that supports the marble top is made up of four narrow planks and a central stretcher: they are linked to each other by mortice and tenon joining and nailed to the blocks below. The frames which hold the glass to the painted paper surfaces on the apron and legs are formed from strips of wood, nailed to the original surface, as are the laurel leaf frieze at the bottom of the apron. The egg and husk moulding, immediately below the marble slab, is nailed to the front of the apron, and also at the back by means of a strip of wood, tucked into the angle.

The surface and ornaments are almost all water gilt in all visible areas excluding those covered with glass painted at the back with imitation marble. The horn-blowing amorini in the central section of the front of the frame, however, are oil gilt.

The components of the table look old, with the exception of the narrow supplementary blocks, which must have been added or replaced at a later date.

(The horn-blowing angels on the Temples Newsam Table are modern restorations in gilt plaster, cast from those on an identical pair of tables from the collections of Lady Anne Tree, sold at Christie's on 4th June, 1970, lot 152. There is no record of such work being done on the V & A table).

W.18-1970 painted above lion compartment above the back right leg.
Museum label

'IXI' scratched on inside of right apron.
Unknown

This table, and its pair, acquired by Temple Newsam House, Leeds, are both decorated with the same technique of glass panels painted to look like coloured marbles or hardstones. This seems to have been a fairly widespread practice in Sicily in the last decades of the 18th century, as evidenced by the survival of a number of pieces of furniture made using it. An identical pair of tables was sold from the collection of Lady Anne Tree, Mereworth, at Christie's on 4 June 1970, lot 152. Other survivals include a pair of tables in the Borghese collection in Rome, and a set of at least 20 side chairs and 4 settees which in the early 20th century was in the collection of the earl of Derby at Derby House, London. Later dispersed, individual pieces from this set are now in the collections of the Metropolitan Museum, New York, the Ringling Museum of Art, Sarasota, and the Art Institute of Chicago.

Much of this furniture has traditionally been linked to the Villa Palagonia at Bagheria, near Palermo, since furniture in this technique is known to have been supplied to the prince of Palagonia for the villa in the 1780s. This rather eccentric villa (bizarre in both its exterior and interior decoration) was known to 18th-century travellers as the 'Villa dei Mostri'. Goethe described his visit there in April 1787 in his 'Italienische Reise' and specifically mentioned the use of this technique that he had seen there. He was impressed with both its decorative effect and practical possibilities for architects and craftsmen, since it could be produced in much larger panels than real hardstones.

No specific history links the V&A table or any of the other surviving pieces to the villa, despite claims made in the past, but there seems to be little doubt of their Sicilian origins.

Console table of carved and gilded wood, decorated with panels of glass and painted paper imitating marble, and with a dark red marble slab

This table is decorated with panels painted to look like marble. The design derives from ancient Roman architecture. The sides recall the form of an architectural frieze supported by columns. The table is carved with gilded masks of a classical goddess and lions’ heads, a common feature of ancient Roman decorative work.

Attribution note: One of a pair. The other is in the collections of Temple Newsam, Leeds. An identical pair of tables was sold from the collection of Lady Anne Tree, Mereworth, Kent at Christie's, 4th June 1970, lot 152. 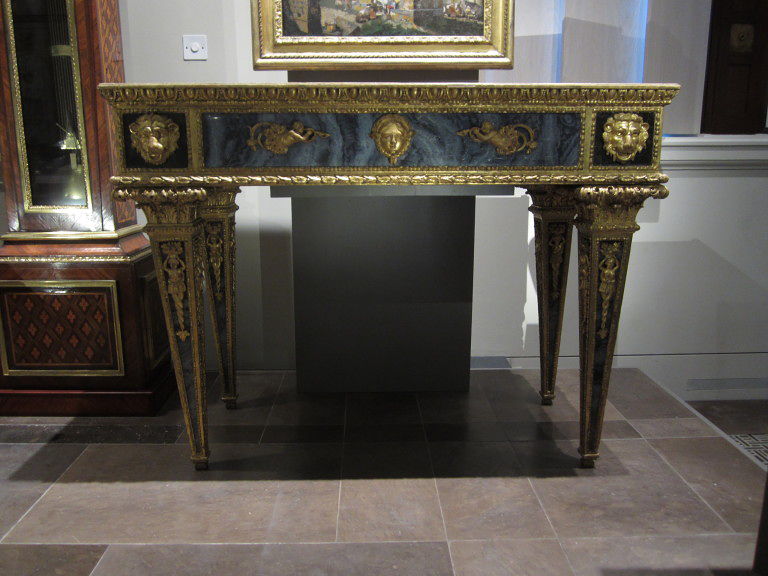