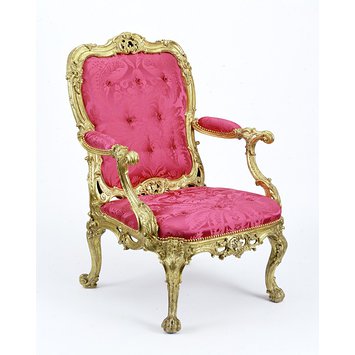 The interest in this chair lies not just in its fashionable Rococo appearance, but in its later use as a prop by the artist Richard Cosway (1742-1821). It was probably made in the 1750s, when such chairs were the height of fashion. Cosway probably bought the chair second-hand in about 1770. He used the chair in several paintings.

The chair was used as a prop for the painting 'Charles Townley with a group of connoisseurs', 1771-1775, now in Towneley Hall Art Gallery and Museums, Burnely.

A sitter in another Cosway portrait showing the chair is Elizabeth - or Eliza - Draper (1744-1778), best known for her friendship with the British author Laurence Sterne (1713-1768). Mrs Draper lived in India for most of her life, and met Sterne in 1767, when she was visiting England. Sterne mentioned Mrs Draper in ‘A Sentimental Journey through France and Italy’ published in 1768. He also wrote a ‘Journal to Eliza’ which was published long after his death. Mrs Draper again visited England in the mid-1770s, when Cosway painted her sitting in this chair.

The chair has been covered in modern silk damask (2001), copying the upholstery which is visible in Draper portrait. The stuffing gives rounded profiles to the seat, back and arms.

A pencil drawing in the V&A collection (Museum no.2848:149) by Matthias Lock (ca. 1710-1765) appears to be the design for this chair. Lock, as well as designing and making his own furniture, also supplied some of the furniture designs for Thomas Chippendale's book ‘The Gentleman and Cabinet-Maker's Director’, published in 1754.

Carved and gilded rococo armchair in the style of the 'French elbow chair' of the 1750s and is upholstered in red damask. The serpentine frame has open-work carving decorated with C and S scrolls, scrolling acanthus leaves, flowers, husks, and fish-scale ornaments. The front cabriole legs terminate in hairy paw feet and balls and the back legs in volutes. The upholstery of the back and seat is tufted. The upholstery is nailed to the arms and seat, but at the back has first been screwed into place.

This chair appears in several portraits painted by Richard Cosway (1742-1821). It epitomises the Rococo style in English furniture. It matches an undated drawing by the carver and designer Matthias Lock. The outlines of the chair are entirely composed of curves and the legs show the fashionable, curving 'cabriole' form with naturalistically carved paw feet.

Naomi Yin Yin Szeto, The Extraordinary in the Ordinary. Chairs for Viewing the World Through Time. Hong Kong, 2014, p. 392. Catalogue of the exhibition held at the Hong Kong Heritage Museum, 2014. However this chair was not lent to the exhibition.
'The Discovery of Cosway's Chair, by John Hardy, in Country Life, March 15 1973.
'Richard and Maria Cosway; Regency Artists of Taste and Fashion', by Stephen Lloyd (Edinburgh, Scottish National Portrait Gallery, 1995), pp.32-33.

ARMCHAIR
From the studio of Richard Cosway
About 1755
This chair appears in several portraits painted by Richard Cosway (1742-1821). It epitomises the Rococo style in English furniture. It matches an undated drawing by the carver and designer Matthias Lock. The outlines of the chair are entirely composed of curves and the legs show the fashionable, curving 'cabriole' form with naturalistically carved paw feet.
Lime and pine, carved and gilded, modern silk damask upholstery
Designed and made in London by Matthias Lock (born in London, about 1710, died there in 1765)
Bought with the aid of funds from the Brigadier Clark Bequest
Museum no. W.1-1973 [01/09/2001]
ARMCHAIR
ENGLISH; about 1760
Carved and gilt wood

Designed and carved by Matthias Lock (d.1765). This chair was at one time in the possession of the artist Richard Cosway (d.1821) and appears in three of his portraits. [pre October 2000]
This chair appears in a portrait attributed to Richard Cosway, of Elizabeth Draper (1744-1778), better known as Stern's 'Immortal Eliza'. It is one of the finest known examples of the type known as 'French chairs', designs for which were published in Chippendale's Gentleman and Cabinetmaker's Director. [pre 1980]
A highly important carved and gilt-wood rococo open armhair of asymtetrical form; the cabriole legs with hary paw feet in front and volutes at the rear, the cartouche shaped back, arms and seat rails excellently carved with acanthus scrolls, C scrolls and flame ornaments. English, circa 1760
Note:
This chair is stylistically very close to some of the so-called 'French Chairs' in Chippendale's 'Director' drawing book. The carver, in this case, has used limewood for the back and arms and pine for the legs and seat rails. The extremely high quality of the carving and the subtlety and sophistication of the design certainly does not preclude a possible attribution to the workshop of Thomas Chippendale. There is, however, no positive evidence to support this. [pre 1990] 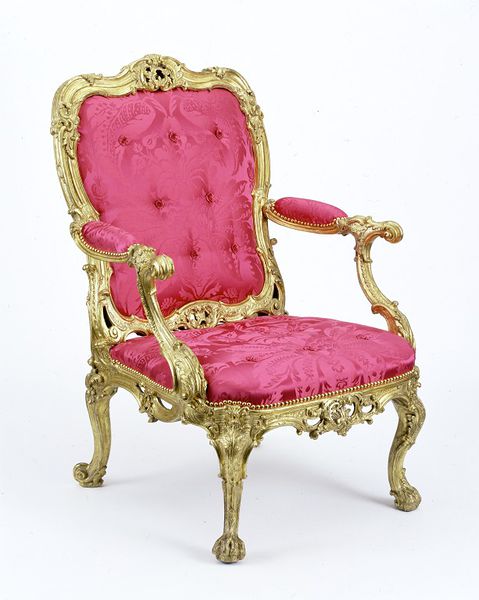