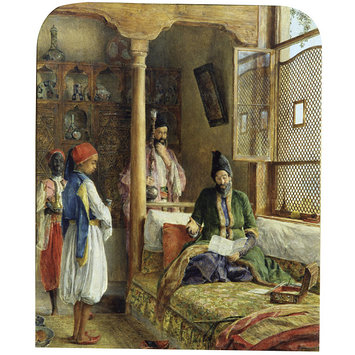 At first sight, this painting is an exotic and rather subtle version of what must have been a fairly common Victorian domestic drama. In a Turkish interior, a rich Persian is upbraiding his shifty-looking servants, having been presented with alarmingly high household bills. For some unexplained reason, Lewis does not indicate that it is also a portrait of Prince Hulugu Mirza, the cousin of the reigning Shah of Persia.

Lewis and the painter David Wilkie were both in Constantinople in 1840, and both had visited and produced several portraits of the Prince, his servants and his new Circassian slave. Hulugu was in exile, as his father had tried unsuccessfully to seize the throne. According to David Wilkie the Prince was 'living at Constantinople on a pension allowed him by the Turkish Government. Having been active in political intrigue, his return to his native country would be unwelcome to the existing power, and dangerous to himself.' Presumably the pension was not big enough to pay all the bills. Wilkie had wanted to use the noble head of the Prince as a model for a figure of Christ, while Lewis (perhaps aware of Wilkie's intention) slyly portrays the Prince as an all-too-human being.

Oil painting on panel showing a bearded Persian wearing a fur trimmed robe and a kalpak, seated on a divan, reading a set of accounts in the presence of three of his servants who are bringing him his coffee and his nargile (hookah.)

Bequeathed by Joshua Dixon, 1886
This oil painting was exhibited at the RA in 1864 with the title`A Startling Account'. This title [instead of `An oriental interior'] is confirmed by the fact that a watercolour version of our painting, almost identical, though slightly bigger, probably made before the oil, was sold at Christie's June 12th 1973, lot 127, illustrated in sale cat. plate 8. as:-

A rich Persian is upbraiding his servants for the alarmingly high household bills. This is a portrait of Hulagu Mirza, a cousin of the Shah of Iran. At the time of Lewis's visit, Hulagu was in exile in Istanbul after an unsuccessful attempt by his father to seize the shah's throne. 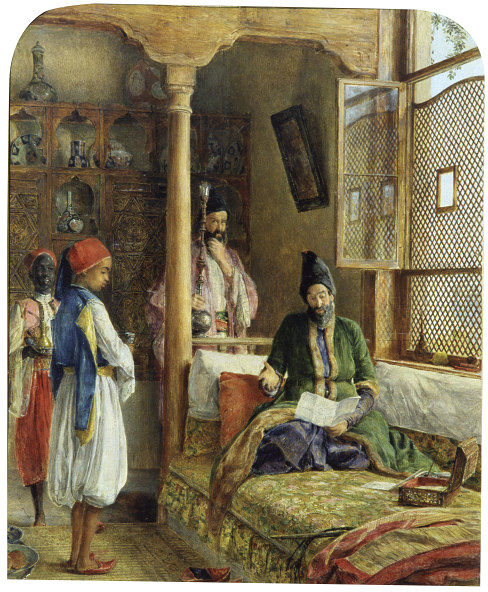