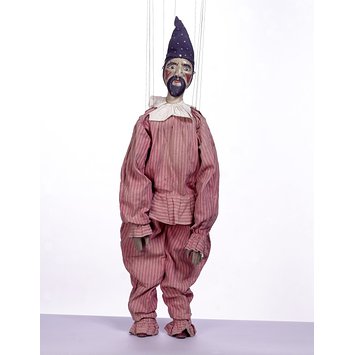 The figures were carved, painted, dressed and performed by members of the company. This is one of a pair based on the music hall performer J. H. Stead (d.1886) in his red and white striped costume. Stead shot to fame in the 1870s with the song 'The Perfect Cure', which created a furore, mainly due to Stead's curious frenzied jumping dance that accompanied it, performed with his hands held rigid at his sides.

Carved wooden marionette (one of two in this troupe - see also S.280-1999), in the form of a contracting and extending Scaramouche, dressed in the outfit worn by the music hall performer J.H. Stead.

Ivory, black and red painted face and eyes with black dots for pupils. Strongly carved moustache and beard, painted black. Wearing a pointed dark blue hat with yellow dots, and a dark pink and white striped suit, with separate white cotton ruff at the neck, and integral ruffs at the wrists, waist and bottoms of the trousers. Thighs and upper arms each containing two basket rings with run-through strings for contraction. One ring between pelvis and shoulders for contraction.

Two control bars; bar one with five notches, the centre one not in use; two strings to each of the inner notches running through bar two, and to shoulders, arms to elbows. Bar two with seven notches - two in use on either side of the centre to support the head, and the centre string to the backside for bowing.

Carved wooden marionette from the Tiller troupe. Speciality act figure representing an extending Scaramouche, dressed as a 'Cure'. One of a pair. Made by the Tiller family circa 1870 to 1890.

It is impossible to identify the precise maker of this marionette since the company made, altered and used figures throughout its career. It is possible, however, to distinguish distinct types, and therefore groups, made by different makers, due to the type of carving. The carver of this object has been distinguished as Maker D. 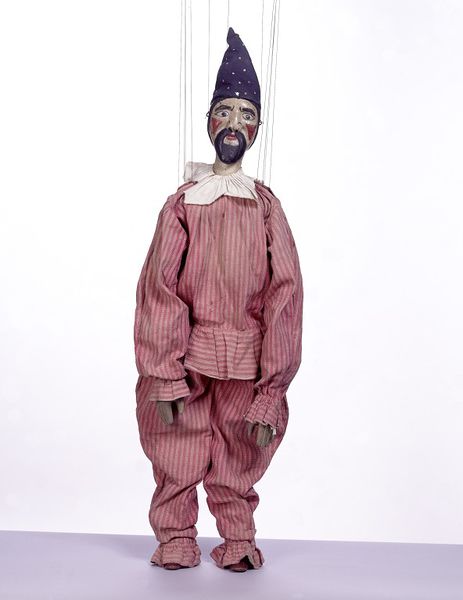