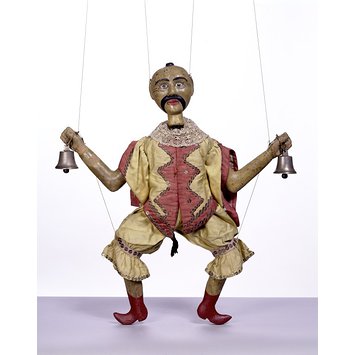 The figures were carved, painted, dressed and performed by members of the company. Dressed in its original costume and adorned with bells, this is one of three Chinese bell-ringer figures which would have featured in the marionette music hall. They were probably based on an act which appeared on the London stage at around the time of the Chinese exhibition which opened in Hyde Park in 1841.

Carved wooden marionette in the form of a Chinese bell ringer, with a small 'cow bell' in each hand (each with a good tone - probably not the originals). Ivory, black and red painted face and eyes with black dots for pupils. Carved mandarin-style moustache and a carved pigtail on the top of his head, with a loose black and brown braid pigtail attached. Carved legs ending in red painted boots, carved with turned-up toes. Similar to S.284-1999 and almost a pair to S.282-1999). Legs and arms allowing for lateral movement only; jointed at hips and at shoulders, each member of three pieces of wood made rigid and shaped as one. The body solid, shoulder and hip, taking joint, with shaped thin pieces added for front and back, producing a hollow effect.

Original yellow silk costume scattered with silver steel sequins. Cream lace ruff at neck. The costume has elbow-length bell sleeves and knickerbockers ending mid-calf, with bands of sequins at the knees, and at the lower edges of the trouser legs. The jacket section is decorated with a band of pink silk appliqué at the end of the sleeves and lower part of the jacket, and as a diamond shaped pattern, edged with sequins, down the front, centre.

Two control bars; bar one with four notches, only one in use, with strings run through the other bar and attached to hands. Hands attached to feet by strings. Bar two with holes for run through at ends; notches with head strings attached.

This marionette along with the rest of the troupe and three of their original backcloths had been stored in a blacksmith's shop in Lincolnshire for over thirty years, but after cleaning and re-stringing, most were restored by Gerald Morice and George Speaight who purchased them in 1945. They began working on recreating some of the puppets' original repertoire. Since the original cloths were too fragile for performance, new backdrops were painted, and in August 1951 as part of The Festival of Britain celebrations, the marionettes took to the stage again as The Old Time Marionettes, at the Riverside Theatre, Festival Gardens, Battersea Park. In the 1980s George Speaight lent the troupe to puppeteers in Germany but in the late 1990s he sold them to John Phillips, an expert puppet carver, manipulator and puppet historian, whose widow sold them to the museum after his death in 1998.

This marionette was used as one of Chu, Chin & Chow, the Celebrated Chinese Bell Ringers! (with S.282-1999 and S.284-1999) in the Variety performance preceding the production of The Floating Beacon at the Theatre Museum in April 2004.

Carved wooden marionette from the Tiller troupe. Speciality act figure representing a Chinese bell-ringer, one of three in the troupe. Made by the Tiller family circa 1870 to 1890.

It is impossible to identify the precise maker of this marionette since the company made, altered and used figures throughout its career. It is possible, however, to distinguish distinct types, and therefore groups, made by different makers, due to the type of carving. The carver of this object has been distinguished as Maker D because the treatment of the nostrils and beard is similar to that in the Cures (S.279-1999; S280-1999). 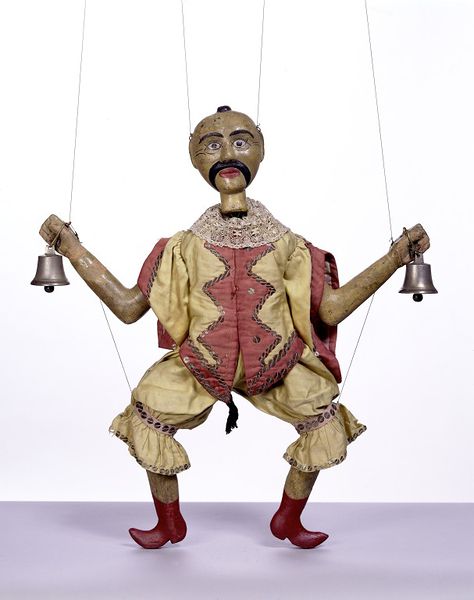