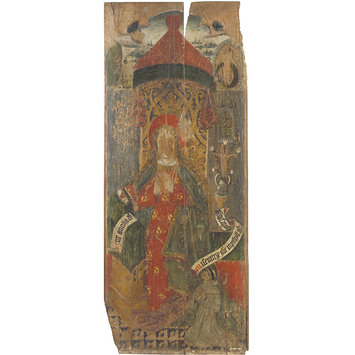 Object Type
Solid, lower panels were a common feature of church screens in East Anglia. Usually they were painted in rich colours and elaborately gilded. This panel is typical of such late 15th-century church decoration in its combination of religious imagery with intricate patterns and naturalistic detail.

Historical Associations
The face and hands of the Virgin Mary and the figure of Christ were almost certainly defaced after the Reformation which was established in England after Henry VIII (ruled 1509-1547) broke with Papal authority in 1534. Religious objects were either removed or else modified to rid them of their associations with Roman Catholic worship. The churches of East Anglia were also cleansed during the Civil War (1642-1646) on the orders of the 2nd Earl of Manchester. This included the modification of images in wood and glass.

Ownership & Use
The panel includes a portrait of a friar. His presence in the image suggests that he could have been the donor, the person who ordered the work. Paintings with donor portraits were usually commissioned in thanksgiving or commemoration. They signified the patron's piety and devotion, as well as their wealth and status in society.

Subjects Depicted
To the right of the enthroned Virgin Mary is a vase of lilies, an image commonly associated with the Annunciation. Lilies also symbolised purity and were therefore an attribute of the Virgin. Amongst the stems of the flowers is a figure of Christ crucified. The use of this motif in this position was characteristically English. A dove by the Virgin's head represents the Holy Spirit. The seascape above the throne's canopy may refer to one of the Virgin's titles, 'Star of the Sea', although this is more usually represented by a star on her cloak.

Panel showing the Virgin, dressed in a blue mantle over a red robe with stylized gold flowers, standing beneath a canopy with gold brocaded back. On a desk is a scroll inscribed `Ecce ancilla do[mini]' On the right is a kneeling figure of the donor, a Grey Friar, named Michael; a scroll issuing from his mouth inscribed: 'Miseratrix a[n]i[m]e mychyll ab hoste protege' Above is a pot of lilies with a figure of Christ crucified among the stems; also, in a rayed border, is a a figure of the First Person of the Trinity; near the head of the Virgin is the Dove; on the top of the panel is an estuary or sea-shore with ships. The floor is tiled.
The face and hands of the Virgin and the figures of the Persons of the Trinity have been defaced

Given by A. H. Fass, 1921
The face and hands of the Virgin and the figures of the Persons of the Trinity have been defaced, presumably during the Reformation when images were often repainted or modified. In the 19th C the panel was in the collection of Sir Henry Bunbury who removed it from Holy Innocents, Great Barton, Suffolk, some time before 1850.
H. Smith in the Antiquaries Journal, 1921, suggested that the seascape in the spandrel at the top of the panel might indicate that painting was made for the Franciscan House at Dunwich. Nicholas Rogers (in a letter to V&A 1979) has suggested that the work is more likely to have been connected with the house at Babwell. He also claims that the panel is: 'undoubtedly a product of the Bury school, about 1470-90, and may have been painted by a member of the Albreed family'. It might have also been painted at Great Barton, Suffolk, as this panel is from a parclose screen in the north nave aisle of the church there. It shows a traditional composition of the Virgin Mary enthroned. It has been adapted to represent the Annunciation by the addition of the words 'Ecce ancilla domini' ('Behold the Handmaid of the Lord'). The careful erasing of the face may be an effort to rob a traditional image of its power while leaving it in its original position.

In the Church of the Holy Innocents, Great Barton, Suffolk, before 1850 Probably painted in Suffolk

Painting of The Annunciation, Anonymous English, 1470-1490