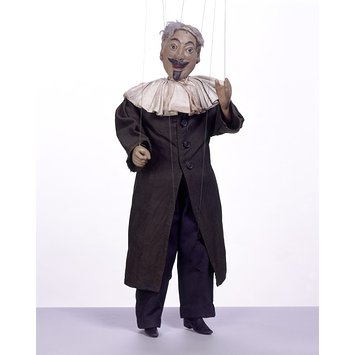 The figures were carved, painted, dressed and performed by members of the company. This is a figure from the Italian knockabout comedy called Commedia dell'Arte, probably a Dottore or doctor, or used as a noble father. The Dottore figure may have been used in the Harlequinade, along with Harlequin, Columbine, Clown and Pantaloon, but could also have been used as a stock character in plays.

Carved wooden marionette; an older male figure. He has a carved moustache and goatee beard, and crêpe wig hair. He is strongly carved, with a flat-topped head and the face painted in an ivory tone. His eyes have black pupils with white flecks, and red dots in each corner. He is dressed in a long black coat (possibly old cassock material) with a braided edge and four buttons, the revers lined. He has navy twill serge trousers and a large white silk ruff. He wears old green socks or stockings cut down to cover the lower leg.

Flat wooden yoke and pelvis; no joint at ankle; leather joint at hip over wire placed in front of the pelvis. There is a tongue on the end of the upper leg which fits into a slot in the lower leg. The torso is stuffed but flexible. There is a string between shoulders for speech, and an unconnected eyelet in the backside for bowing.

Two control bars; bar one with leg strings; bar two (five notches), the head to the outside, then the hands with the shoulder string attached to one of these. There is nothing attached to the centre notch.

Carved wooden marionette from the Tiller troupe. Stock character representing an older man, possibly a noble father figure, or a Dottore figure based on a Commedia dell'Arte character. Made by the Tiller family circa 1870 to 1890.

It is impossible to identify the precise maker of this marionette since the company made, altered and used figures throughout its career. It is possible, however, to distinguish distinct types, and therefore groups, made by different makers, due to the type of carving. The carver of this object has been distinguished as Maker C because of the attention given to the carving of the ears. 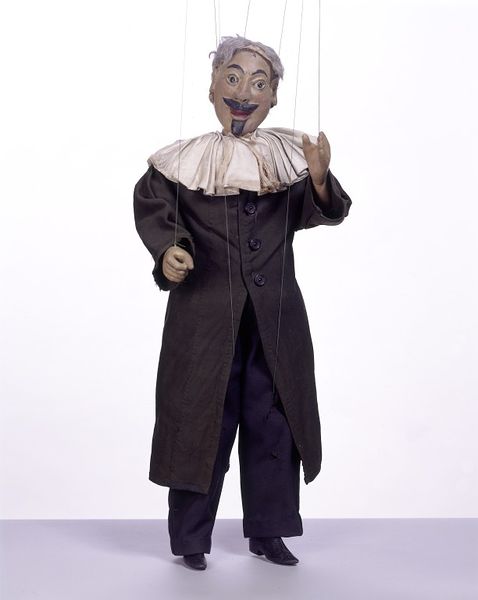