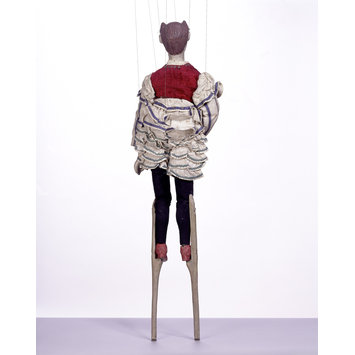 The figures were carved, painted, dressed and performed by members of the company. This is one of two white-faced clowns with articulated mouths who performed a comical drunken stilt-walking act. The clown's feet and calves are attached to his stilts; he has a beer bottle in his right hand, and his left hand is carved closed. The act was very popular in the marionette music hall, and figures like this featured in several different companies.

Carved wooden marionette in the form of a white-faced drunken stilt-walking clown, a speciality act. He is wearing a white cotton knickerbocker suit trimmed with blue braid, the thigh-length knickerbockers with four flounces around each leg. The jacket has puffed shoulder sections with flounces above the elbow, below which are straight, fitted sleeves, to the wrist. The white jacket features a central blue silk panel with a silver sequin surround, and he wears a red velvet waistcoat, trimmed with sequins. He has black knitted stockings, and carved shoes, painted red. His feet and the sides of his calves are attached to white stilts, which are padded on the ends to reduce slippage. Both hands are closed, and he holds a beer bottle in his right hand.

He has hair carved with points either side of a bald pate, and a white painted face and head, decorated with clown's stylised make-up of a red diamond on each cheek and one on his forehead. He has an articulated mouth with a hole in the centre of the head for string, which is not connected..

There are joints at the ankle, knees and pelvis. The lower arm is in one piece, and the upper arm is stuffed, with joints at elbow and shoulder. The body is in two pieces but strongly stuffed, with some movement. The neck/torso is a two-stapled joint. There is a small staple on the upper lip for the bottle string to pass through. The thigh joint is a cotton 'bag' going 5.5cm down thigh, with padding inserted in the top 3cms. It is sewn across at the top, then 3cm of the flattened cotton is attached by tacks to the base of the pelvis. The whole is cut like a pair of pants and tacked to the pelvis.

There is a hole through the head for a string, which is not connected, and a staple in the upper lip for control of the bottle string. There is a string to the backside for bowing. There is no padding in the central section of the body and the legs are attached to the body section by a piece of rexine, tacked front and back, under which are remnants of an older cloth joint.

The clown is worked by two doweling control bars, possibly replacements for the originals. Bar one controls the knees for walking. Bar two has seven notches (three without strings attached); the head is controlled by two strings (from the notches third left and right); there is a bowing string (to waist) from the centre; a pull through bottle string, left of centre (through screw eye), and the left hand is controlled from the extreme left notch.

This marionette was used with his fellow stilt-walker (S.287-199) in the double act Joe and Joey, the Comical Stilt Walkers, in the Variety performance preceding the production of The Floating Beacon at the Theatre Museum in April 2004.

Carved wooden marionette of a white-faced stilt-walking drunken clown from the Tiller troupe, a speciality comedy act. Made by the Tiller family circa 1870 to 1890.

It is impossible to identify the precise maker of this marionette since the company made, altered and used figures throughout its career. It is possible, however, to distinguish distinct types, and therefore groups, made by different makers, due to the type of carving. The carver of this object has been distinguished as Maker C. 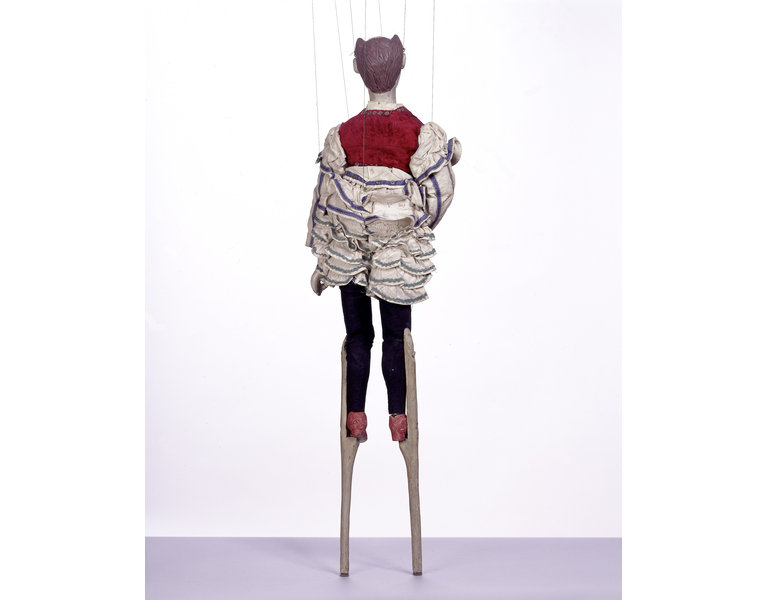