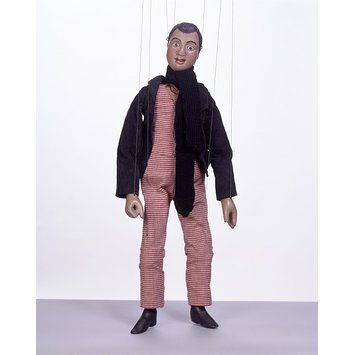 The figures were carved, painted, dressed and performed by members of the company. This is a fresh-faced young man who would have been a stock character, used in any play requiring such a role. His right hand is carved closed to hold props, the other shaped for gesture.

Carved wooden marionette; a fresh-faced young man wearing red and white checked waistcoat and trousers with a russet synthetic silk bow tie and dicky, black cotton cord jacket with buttons made from old beads, and a black knitted scarf. These are not original clothes and indicate that this marionette was possibly re-dressed in the 1950s. He has carved hair and an ivory, black, red and white painted face and eyes with black dots for pupils.

There is a small staple in the back of his head for tilt motion and his right hand is shaped to hold a prop while his left hand is open for gesture. Wooden yoke and pelvis of the 'flat' Tiller design, with a heavily stuffed torso, possibly with straw. The body was probably re-covered in the 1950s. There are leather thigh joints over metal staples (replacements) and a string between his shoulders. The ankle joint has a metal strip; the knee is a carved wooden joint with a nail through it and the upper legs have tongues which slot into the lower legs.

Two control bars; bar one for the leg strings. Bar two for the head string, hand strings, and the back string. A modern screw eye has been added to one bar.

Carved wooden marionette from the Tiller troupe. Stock character representing a fresh-faced young man. Made by the Tiller family circa 1870 to 1890, but re-dressed possibly in the 1950s.

It is impossible to identify the precise maker of this marionette since the company made, altered and used figures throughout its career. It is possible, however, to distinguish distinct types, and therefore groups, made by different makers, due to the type of carving. The carver of this object has been distinguished as Maker B because of its standard-sized head.