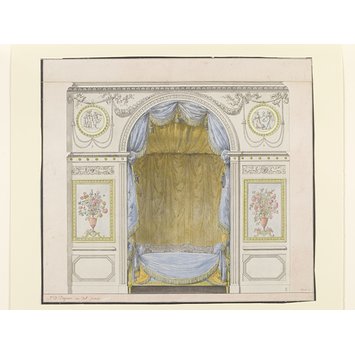 Jean-Démosthène Dugourc (Versailles, 23 September 1749 – Paris, 30 April 1825), was a talented and versatile designer. His father was the controller of the household of the Duc d’Orleans, and Dugourc had the benefit of being educated as the companion of the Duc’s son. He travelled to Italy in about 1764-65, where he met Johann Joachim Winckelmann, the famous scholar and enthusiast of the antique. He married the sister of the architect and landscape designer François-Joseph Bélanger in November 1776. His first recorded project, of 1770 was for the opera house at Versailles, and he received many commissions from court circles. His career had an international scope, with commissions for the courts of Spain, Sweden, England, Germany and Russia. He lived in Madrid from 1800 to 1814. His textile designs for Camille Pernon et cie. of Lyon are celebrated (see for example T.69-1951). His work confidently draws on a number of different styles.

This design is an elevation of one wall of an interior, with a bed or day-bed set in a niche, for a similar example see Museum no. 8459-1863 in the V&A’s collection. Beds such as this set in to a niche gave greater intimacy and privacy, as well as protection from draughts. The design includes decorative elements in the classical style, and the confident handling of decorative elements inspired by the antique is a feature of Dugourc’s work. The subjects of the two roundels, showing scenes of figures in classical dress, have not yet been identified.

Pen, ink, and watercolour drawing of the decoration for an interior wall with a bed in a niche. Deep blue and orange tasseled fabric curtains drape in the niche. The walls on either side are ornately decorated and painted with depictions of flower bouquets and with beading and garland decoration. Two rectagular panels contain the head of Mercury flanked by griffins in the grotesque style. Two roundels show unidentified scenes of classical figures.

France (made)
Paris (made)

Pen, ink, and watercolour on paper

J.D. Dugourc, iuv. Del. Paris
Inscribed in ink in the bottom left of the drawing.

This design came to the museum with a group of drawings (Museum nos. 667 to 702), some attributed to Dugourc, described as ‘in a large folio volume’.

Howard Coutts (Apollo, January 1986) relates this design to an album of designs by Dugourc and Alexis Grognard (1752-1820) now in the Musée des Arts Décoratifs in Paris. The album has been associated with the Comte and Comtesse de Provence, but the evidence for this is not clear, as it is based on a now missing fly leaf inscription. According to Coutts the drawings by Dugourc in the album often have their dates erased, like this one. However, apparently the date shows as 1786 under infra-red light. As other designs in the album are dated 1790 it would appear that Dugourc reused older designs. Coutts points out that it seems incongruous that anybody in Paris would be commissioning luxury schemes like this the year after the French revolution. Dugourc made many designs for the Spanish court, beginning in 1786, so it is possible that this design relates to a Spanish commission.

Drawing, pen, ink, and watercolour, design elevation for the decoration for the wall of a room with a bed in a niche, Jean-Démosthène Dugourc, possibly 1786-1790

Jean Démosthène Dugourc
(1749-1825)
Design for the decoration of the side of a room
French 1770-80
Pencil, pen and ink and watercolour

The light and decorative neoclasscism that became so fashionable in France in the 1770s and 1780s is shown in this drawing. The prevalent taste for having a bed or 'meridienne' in a curtained niche is continued, but with a newly fashionable tented ceiling. Dugourc, who had trained as an architect with Francois-Joseph Belanger, a relative by marriage, was to prove one of the leading inspirations of the succeeding fashion in France, the Empire taste. [] 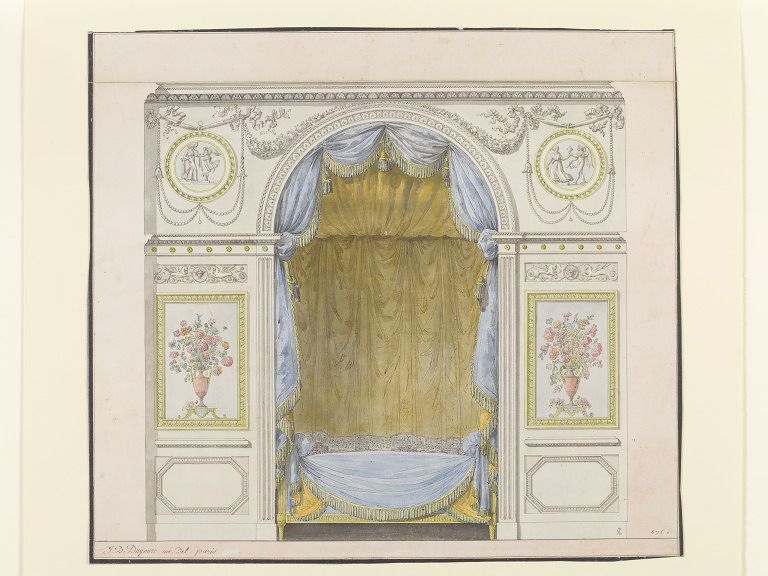